Under the crescent of Ramadan, Syria at war 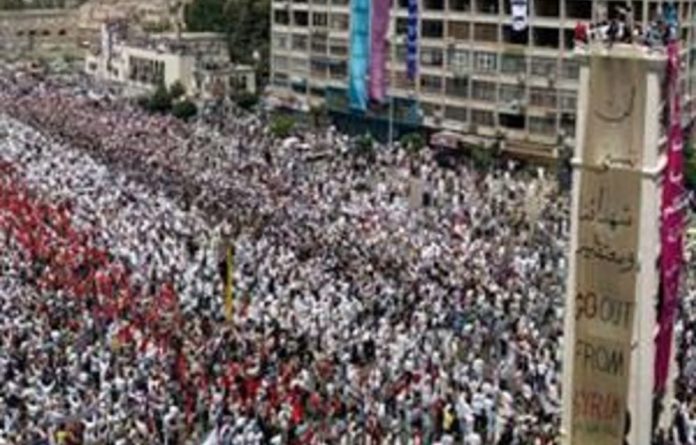 Syrians began the Ramadan fast in sombre mood on Monday after troops stormed into Hama, scene of a 1982 massacre, in one of the bloodiest days of a five-month-old uprising against President Bashar al-Assad.

Rights activists said 80 civilians were killed in Sunday’s tank-backed assault on the central Syrian city where al-Assad’s father crushed an armed Muslim Brotherhood revolt 29 years ago by razing neighbourhoods and killing many thousands of people.

Security forces had besieged the Sunni Muslim city of 700 000 for nearly a month before Sunday’s crackdown on the eve of Ramadan, a holy month when Muslims fast in daylight hours.

Many people flock to mosque prayers at night, occasions which may provide opportunities for protests to multiply across Syria.

The Syrian state news agency said the military entered Hama to purge armed groups that were terrorising citizens, an account dismissed as “nonsense” by a United States diplomat in Damascus.

Residents said tanks began pounding neighbourhoods of the city after attacking from several directions in a dawn assault.

Footage posted on social media showed large parts of the city covered in smoke, and panic-stricken groups surrounding the bodies of dead or wounded people in the streets as gunfire rang out. Reuters could not independently verify the content of the videos.

US President Barack Obama said he was appalled by the Syrian government’s “horrifying” violence against its people in Hama and promised to work with others to isolate al-Assad.

“Syria will be a better place when a democratic transition goes forward,” Obama said in a statement.

Britain and France condemned the Hama assault. Italy urged a tough statement by the UN Security Council, where Russia and China have previously opposed any condemnation of Syria.

Germany requested that the Security Council meet on Monday, a spokesperson for its UN mission said. He said Germany had asked India, which holds the Council presidency for August, to schedule closed-door consultations and these were likely to take place in the afternoon, New York time.

The European Union plans to extend sanctions on Monday by slapping asset freezes and travel bans on five more Syrians. EU sanctions already target al-Assad and at least two dozen officials, as well as Syrian firms linked to the military.

Turkey, one of al-Assad’s main allies until the uprising, said it and the rest of the Muslim world were “deeply disappointed” by the violence that belied al-Assad’s earlier reform pledges.

The Syrian human rights organisation Sawasiah said the civilian death toll in Hama had risen to 80. The independent group cited medical officials and witnesses in its report.

Syrian authorities have expelled most independent journalists since the anti-al-Assad unrest began in March, making it difficult to verify reports of violence and casualties.

Al-Assad has increasingly relied on security services and army units dominated by members of his minority Alawite sect, which has dominated power since a 1963 Baath Party coup, to suppress protests in Syria, where most people are Sunni Muslims.

In a letter to troops on the occasion of army day, al-Assad repeated earlier statements that Syria was facing a foreign conspiracy to sow sectarian strife, adding that its aim was to “tear Syria into small statelets that compete to satisfy those who worked to slice them up”.

“All of Syria’s honourable people are sure that we will emerge stronger from the crisis,” al-Assad said.

Massacre instilled fear
The 1982 Hama massacre instilled such fear that few Syrians were ready to challenge al-Assad family rule openly until this year, when many were inspired by the largely peaceful popular uprisings that toppled Arab autocrats in Egypt and Tunisia.

“The authorities think that somehow they can prolong their existence by engaging in full armed warfare on their own citizens,” US press attaché JJ Harder told Reuters.

The Muslim Brotherhood accused the Alawite elite of waging sectarian warfare on Sunnis by attacking Hama.

“Syria is witnessing a war of sectarian cleansing. The regime has linked its open annihilation with the . It is a war on the identity and beliefs of the Syrian nation … on Arab Muslim Syria,” it said in a statement.

Citing hospital officials, the Syrian Observatory for Human Rights said earlier that the death toll in Hama was likely to rise, adding that dozens had been badly wounded.

A doctor, who did not want to be further identified for fear of arrest, told Reuters that blood for transfusions was in short supply.

“Tanks are attacking from four directions. They are firing their heavy machineguns randomly and overrunning makeshift road blocks erected by the inhabitants,” the doctor said by telephone early on Sunday, the sound of machinegun fire crackling in the background.

Residents said irregular Alawite “shabbiha” militiamen had accompanied the attacking forces in buses and put up tents overnight at Qazo roundabout in the city’s western quarter.

The Syrian leadership blames “armed terrorist groups” for most killings during the revolt, saying that more than 500 soldiers and security personnel have been killed.

Another resident said that in Sunday’s assault, bodies were lying uncollected in the streets and so the death toll would rise. Army snipers had climbed onto the roofs of the state-owned electricity company and the main prison, he said.

Tank shells were falling at the rate of four a minute in and around north Hama, residents said on Sunday morning. Electricity and water supplies to the main neighbourhoods had been cut, a tactic used regularly by the military when sweeping into restive towns.

In southern Syria, rights campaigners said security forces killed three civilians when they stormed houses in the town of al-Hirak, 35km north-east of the city of Deraa.

The Syrian Observatory for Human Rights said troops had detained more than 100 people in Mouadamiyah in Damascus. A Western diplomat said he saw several tanks enter the suburb.

In the eastern province of Deir al-Zor, residents said at least 11 civilians had been killed in a weekend crackdown.