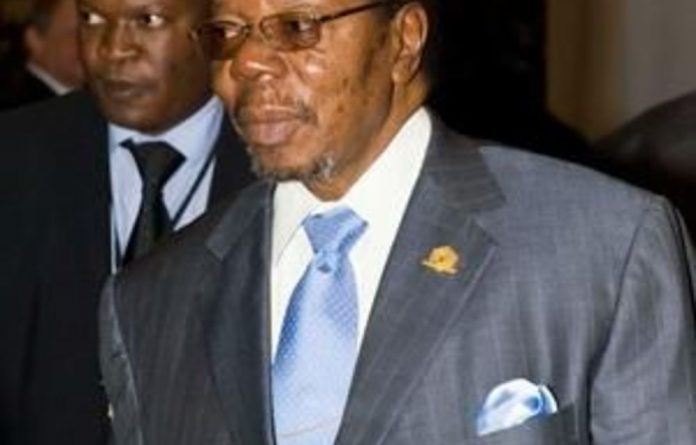 The 77-year-old former World Bank official once heralded by economic analysts has declared Malawi “a black country for black people”. And a British diplomat whom Mutharika expelled from the country describes the president as “becoming ever more autocratic and intolerant of criticism”.

It’s an unlikely turn for a man who won close to 65% of the vote in an election in May 2009. As the country’s economy has soured, though, so too has public opinion.

“Things are tough and Bingu doesn’t seem to care. He keeps driving with over 30 vehicles in his motorcade while our fathers can’t have five litres of petrol. What an unfeeling man!” said Alice Banda, a 24-year-old street vendor who says she now regrets voting for him in the last two elections.

Taxi driver Wanangwa Bamusi never thought he would carry a sign denouncing the president — until he did last month.

The anti-government demonstrations across Malawi in July were met with an unprecedented crackdown by authorities and the president himself personally lashed out at opposition leaders.

“This time I’ll go after you! Even if you hide in holes I’ll smoke you out!” he warned in a speech broadcast on state television a day after he said the protesters were “being led by Satan.”

Mutharika first came to power in a 2004 election, and elections are not due again in Malawi until 2014. Some critics such as human rights activist Undule Mwakasungula say they’ve seen a real change in his demeanour over his seven years in power.

Tensions have been growing this year over worsening shortages of fuel and foreign currency. High unemployment alongside a deteriorating economic situation also threaten to reverse development gains made in the early years of his presidency.

On Monday, the president appealed to Malawians to avoid holding any street demonstrations during August to avoid disrupting the Muslim holy month of Ramadan. Protest organisers, though, say demonstrators will take to the streets again on August 16 if the government fails to address their grievances.

When Mutharika first came to power, he was backed by his predecessor, Bakili Muluzi. Mutharika vowed that fighting poverty would be his first priority and also championed the fight against corruption — winning the praise of Malawians and foreign observers alike.

A feud between the two men ensued, after Mutharika had Muluzi charged with corruption and fraud, and Mutharika left the ruling party to establish his own. Political bickering between the two men led to extensive legislative delays, rioting, a failed impeachment bid, and accusations of coup and assassination plots.

After winning re-election, Mutharika kept his campaign promise of expelling foreign tobacco buyers who were paying less than agreed-upon prices for the country’s main cash crop, calling them the “enemy of the people”. In 2009, tobacco was responsible for more than 75% of Malawi’s foreign exchange earnings.

Mutharika’s second term also has been marked by some sharp rhetoric. He pardoned a gay couple who had been sentenced to 14 years in prison on “humanitarian grounds only” last year, all the while insisting that homosexuality was still illegal in the conservative nation.

Later that year he described Malawi as “a black country for black people” after a white man’s five dogs seriously wounded an elderly Malawian.

In April, Mutharika expelled Britain’s High Commissioner to Malawi, after he was quoted in a local newspaper expressing concern about the president’s intolerance of criticism and about deteriorating human rights. British envoy Fergus Cochrane-Dyet was given 48 hours to leave the country.

And a $350-million US grant to improve Malawi’s power supply network remains on hold while a review of the agreement is conducted. It was delayed for several months earlier this year, until Washington said it had received “strong commitments” from the Malawi government to uphold human rights.

The state-run Malawi Human Rights Commission — backed by several international human rights bodies and the United Nations — has initiated investigations into how live bullets were used on unarmed protesters during July’s unrest. For Mwakasungula, the activist, the violence was not unexpected.

“The character we’re seeing now is the true character of the person. He’s showing his true colours now,” he said. – Sapa-AP