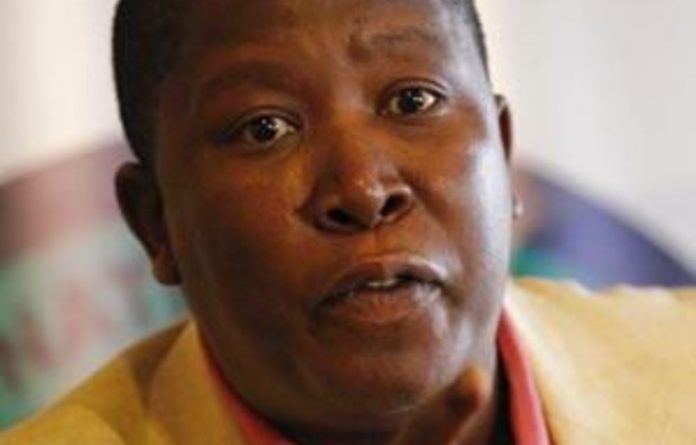 Insiders, who have broken ranks but asked not to be named, described a system whereby On-Point Engineers dangled tenders from the provincial roads and transport department in front of would-be contractors and then demanded to come in as a silent partner, taking a large cut.

The M&G revealed a fortnight ago that On-Point, co-owned by Malema’s family trust, has been running the roads and transport department’s outsourced “programme management unit” since 2009.

The unit — and therefore On-Point — helps administer the department’s multibillion-rand budget to plan, contract for and oversee road works.

Both the department and On-Point have previously denied that this enables On-Point to influence who gets which contracts from the department. Now the insiders — several close to On-Point and two contracting company bosses — insist that this is indeed the case and that On-Point abuses that position by demanding to be included secretly in the contracts it helps to dish out.

This, they charge, On-Point does through verbal or written agreements with contractors specifying that the company will receive as much as 70% of the profit, supposedly for doing a portion of the work.

The M&G has obtained one such “memorandum of understanding”, drafted, allegedly, on the instruction of Lesiba Gwangwa, On-Point’s chief executive and Malema’s long-time business partner.

The department is already paying On-Point R52-million to run the unit over a three-year period. This should exclude it from acting as a paid contractor to the department on the contracts it helps to administer. The arrangement to come in as a silent partner with other contractors appears to be a deliberate way around that.

When confronted about the dealings with the tenders this week, provincial roads and transport minister Pinky Kekana said she was not aware of such practices, adding that she would instigate her own investigation if any evidence came to light.

Malema, who acknowledges his family trust’s shareholding in On-Point, has insisted that he plays no part in its operations.

Gwangwa did not respond to emailed questions but later referred them to his lawyer, who did not provide answers either.

Three sources connected to On-Point and one contracting company boss who has been locked into the tender kickbacks claim the deals are negotiated by Gwanga.

The memorandum of understanding obtained by the M&G outlines that the purpose is “to establish a working arrangement between On-Point” and the company in question “in order to pursue and exploit opportunities that may be available in the market”.

It then states: “The parties hereby agree that they will be working on the following [deleted to protect the company’s identity] projects for the Limpopo department of roads and transport” and subsequently lists a portfolio of works worth millions.

The memorandum gives a formula for splitting the income, which appears to give the lion’s share to On-Point. The fees for the planning and design stages would go to On-Point, while the contractor would get “all fees for the construction stages”.

The offer that was on the table related to construction work that, the M&G has calculated from related documentation, was valued at more than R70-million. From this amount, On-Point and the contracting company in question would have shared the “professional fees” of more than R10-million.

The memorandum contains strong secrecy clauses, barring either party from disclosing “terms and conditions of this MoU and any and all information about the other party”.

A second contracting company boss has told the M&G he signed a similar memorandum with On-Point.

“The practice [of negotiating kick-backs] is rife,” an On-Point insider insisted, and both contracting company bosses said it was an open secret in the industry.

Another On-Point insider insisted that companies were carefully chosen for these deals, and said On-Point employees had been instructed by Gwangwa on several occasions to attend bid evaluation committee meetings at the roads and transport department to “push for certain companies” to be awarded contracts. On-Point’s cut, he said, was usually negotiated before the contracts were awarded.

“He [Gwangwa] came to me and asked for 40%,” said the first contracting company boss, who insisted he turned down the proposal. At the time his company was working on one tender from the roads and transport department, but had he agreed to the offer Gwangwa was dangling, his company stood to win many more.

One of the On-Point insiders said Malema was an occasional visitor to On-Point’s offices in Marshall Street, Polokwane, but that he did not attend meetings or get involved in their work.

“He just comes in to see Lesiba [Gwangwa],” he said. “They close the door. His bodyguards stand outside. But he doesn’t stay long. Maybe five or 10 minutes.”

More frequent visitors, he said, included Selby Manthata. He is a business partner of Limpopo premier Cassel Mathale and his company, Selby Construction, has also won multimillion-rand tenders from the roads department.

Though none of the province’s political leaders frequented the On-Point offices, politics were part and parcel of the business, the insider said.

In the run-up to the ANC Youth League congress in June — when Malema was running for a second term as president — there were instructions to “bring in R30-million” in outstanding payments, allegedly so that they could be used to support his campaign.

The R30-million consisted of both kickbacks and officially due payments, he said.

In addition to On-Point, which he co-owns with Malema’s family trust, Gwangwa:

Gwangwa is also involved with SGL Engineering — in which Malema held a formal stake for a while — and its predecessor, Segwalo Consulting Engineers.

Segwalo, the M&G has previously shown, also benefited from a contract administered by the programme management unit. Gwangwa has previously said the contract was awarded before the unit was created and was only transferred to it at a later stage.

Beyond the unit, Gwangwa’s companies are active across the province.

Earlier this year On-Point won a R5-million tender to design and construct the Flag Boshielo public buildings — named after the political activist — for the Sekhukhune District Municipality, a letter of award in the M&G‘s possession shows.

While Malema has admitted to his shareholding in On-Point, it is not clear whether he benefits from other Gwangwa companies.

However, On-Point, Qualis, Mminathoko and SGL all appear to operate from the same premises in Marshall Street, Polokwane.

Malema was a director of SGL in 2009 and 2010 but resigned at about the time public protector Thuli Madonsela investigated the company to see whether he had unduly influenced the many tenders awarded to it. Although Madonsela found no evidence that Malema had manipulated the tender processes, she reported that much of the required paper trail could not be found. Madonsela has yet to come to grips with a separate complaint about On-Point.

Malema’s association with SGL surfaced again this year with his opponents bemoaning what they called the “SGL-isation” of politics when they tried to prevent him from getting a second term as the head of the youth league.

The network of companies and tenders from which Malema and Gwangwa benefit has been exposed in stages since then, with City Press and the Sunday Times publishing allegations of Limpopo businesses paying kickbacks to his family trust or towards his home renovations, and the M&G exposing the On-Point racket.

Fiona Forde is the author of the soon-to-be released An Inconvenient Youth: Julius Malema and the ‘New” ANC