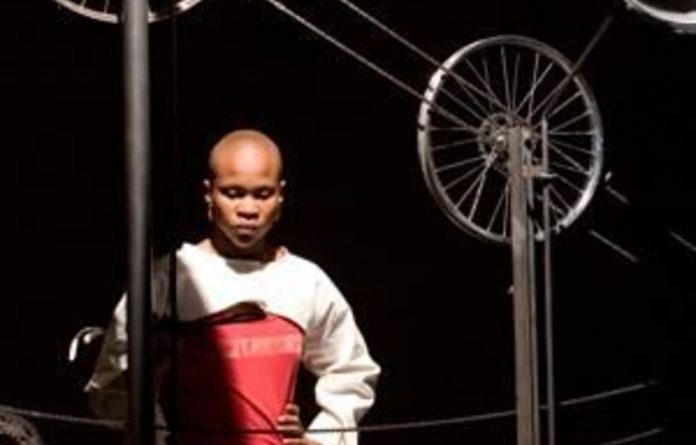 At the Refuse the Hour press briefing, held at William Kentridge’s studio at Arts on Main in August, Kentridge described the performance Dancing with Dada as the start of a large-scale collaboration between someone who can move fantastically well and someone who can’t move at all.

Dancing with Dada is the result of early thinking for a bigger project Kentridge has been invited to produce for Documenta 13 in 2012, an exhibition of contemporary art that takes place every five years in Kassel, Germany.

Refuse the Hour is an exciting programme of live performance events created by artist William Kentridge and his collaborators that takes place from September 6 to 18 at the Market Theatre in Johannesburg. It is an innovative retrospective of his past work, and will also showcase some of his latest projects.

The project that will open at Documenta 13 is called The Refusal of Time and the idea of refusing and resisting time through live performance, movement, music and film (all time-based mediums) is challenging, to say the least.

Dancing with Dada is still in the early stages of development and involves music composed by Phillip Miller, projections and films by William Kentridge and dancing and choreography by Dada Masilo.

The collaboration between Kentridge and Masilo came about at the end of last year, during a workshop held by Kentridge for the beginning of the The Refusal of Time.

Masilo was an active participant in this workshop and, in her own words, was “encouraged by Kentridge to be an eye in terms of choreography and to play with movement”.

Stepping into the unknown
Masilo, who trained at the Dance Factory between 1997 and 2002 as well as the renowned Performing Arts Research and Training Studios in Brussels and who has won several awards, including the 2008 Standard Bank Young Artist award, describes the uncertainty of the workshop process used by Kentridge as discomforting in the best way possible.

“Normally, I take one idea and become obsessed with it, whereas William works with a lot of ideas at the same time, often not knowing where one particular element may or may not lead.”

Masilo’s own works serve to re-interpret and create alternatives to classical ballet and narratives. In her 2008 performance of Romeo and Juliet, which was commissioned as part of the Standard Bank Young Artist award, Masilo followed the narrative structure of the Shakespearian tragedy closely but, through a combination of classical ballet and contemporary dance, she allowed for alternative readings of the well-known characters and themes.

Masilo’s ability to challenge the structural elements of dance and music through a fusion of different techniques and modes is not only a way of exploring and opening up often pre-existent narratives, but also is a way of investigating and analysing the very language and arrangement of classical ballet and music.

In Masilo’s most recent work, The Bitter End of Rosemary, she returns to her exploration of Shakespearean tragedy, this time exploring and questioning the character of Ophelia in Hamlet.

Working inwards
Through the movement of her own body, Masilo acts out Ophelia’s madness. It is through this that she gains access to the scripted instability of the character she takes on. This in turn allows for the questioning of the script she portrays, simultaneously enacting and unraveling conceptions of the character of Ophelia.

In her 2010 production of Swan Lake, Masilo took on what seemed like the impossible task of fusing classical ballet and African dance.

She is adamant that she does not aim to provoke, but rather attempts to magnify and explore the ideas surrounding the stereotypes that appear in the characterisation of the stories she reinterprets.

The decision to cast a male in one of the female leads in Swan Lake is a way of opening up and challenging the gender-specific language that exists in classical ballet.

In this work, Masilo also made the decision to incorporate African dance into classical ballet, but to keep the original music by Tchaikovsky. The fluidity and ease with which she did that is proof of her exceptional and almost intuitive understanding of rhythm and ­movement.

Masilo describes the fusion of Western and African dance as “two extremes that can be uncomfortable for the body, but it is through this discomfort and through this challenge that I find my own rhythm”.

“As a young student, I told my theory teacher, Clare Loveday [who, incidentally, interviewed Philip Miller for this supplement] that I battled with rhythm, to which she responded: ‘Everyone has rhythm, because everyone has a heart that beats.'”

The anxiety of time
Of course, the human capacity to understand and interpret rhythm can be understood and interpreted differently. John Cage is quoted as saying that “Western music suffers from an anxiety of time” and the concept of music and dance moving away from or abstracting time is almost impossible in that both mediums are by their very nature time-based.

According to Loveday, Western rhythm is beat-based, whereas African rhythm is pulse-based, the approach to the grouping of rhythms and time is fundamentally different.

In Western music, the type of grouping that is allowed for is limited by its very structure. African rhythm, however, is far more forward-moving and open to a wider variety of different groupings and rhythmic exchanges.

Masilo’s use of the forward-moving rhythm of African dance within the confines of the beat-based original score by Tchaikovsky is not only a remarkable fusion of African and Western, it is also in some ways

the beginning of a resistance to the way in which time and rhythm are understood.

It is fitting then, that this exceptional dancer and choreographer should bring her intuitive and groundbreaking understanding of movement and music to Kentridge’s new project.

Multimedia experimentation
At the time of the press preview for Refuse the Hour, William Kentridge and Dada Masilo had been working together for three days.

Said Kentridge: “We have another three weeks and then it has to be ready.”

Although the actual content of the performance Dancing with Dada is still unknown, at the briefing Kentridge explained that the work would involve a range of instruments and performers.

Kentridge also elaborated on the sculptural machines created by Christoff Wolmarans and Louis Olivier, around which Masilo will negotiate her body.

The machines, which work by a series of levers and cranks that are turned or manipulated, were not designed, but are rather a series of found objects (including cones, bicycle wheels and megaphones) that were built up and developed. Wolmarans describes the building of the machines as “evolving, almost like a drawing”.

The almost awkward and seemingly fragile nature of these mechanical objects is bound to be juxtaposed by the agile and fluid way in which Masilo dances.

Masilo has described her style and natural movement as quick and energetic: “I’ve got a thing about dancing fast — but I need to keep bringing it back, to the pace of the animation and to the pace of the machines — which is a good thing — it’s challenging.”

Masilo’s intuitive ability to move, paired with her excellent understanding of the systems and conventions of dance, means that she can exist within the structure of Kentridge’s animations and machines in a way that is not limiting but rather brings about a new dimension to the notion of “resisting time”.

In the last rehearsal she had with Kentridge, he asked: “How do you remember the things that you do?” To which she replied: “The body remembers everything.”