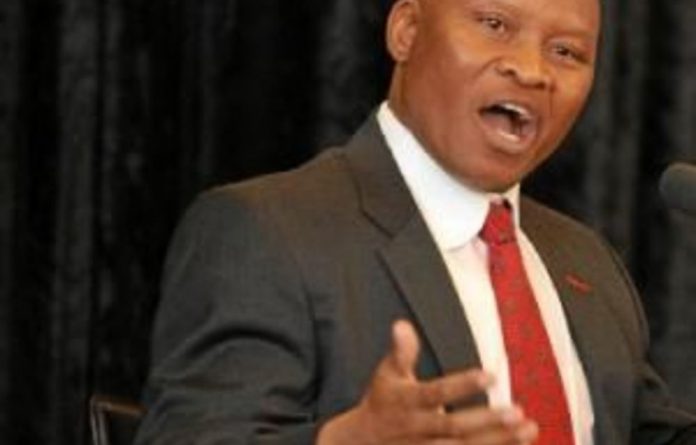 The latest legal skeleton to fall out of the cupboard of President Jacob Zuma’s favoured candidate for chief justice, Mogoeng Mogoeng, is that he handed down two controversial judgments on marital rape while he was a high court judge.

The judgments support widespread concerns that Mogoeng’s judicial outlook is at variance with South Africa’s liberal democratic Constitution, particularly with regard to women’s rights.

They have prompted submissions by a range of civil society groups, including public interest organisation Section 27, to the Judicial Service Commission (JSC) that he is not a suitable candidate for the post of chief justice.

In one appeal, heard in the Bophuthatswana High Court (subsequently renamed the North West High Court) in Mafikeng in 2007, Mogoeng suspended a convicted rapist’s two-year jail sentence on the grounds that he had been “aroused” by his wife and had used “minimum force”.

Mogoeng accepted that the appellant had returned home one night after moving into his parents’ house. He had “throttled his wife” and pinned her to the bed to have sexual intercourse with her.

His wife fought back and managed to escape to safety in a neighbour’s house.

Mogoeng said he was satisfied that “the guilt of the appellant was proved beyond a reasonable doubt”. However, he also said that “no real harm or injuries resulted from the throttling — the case is not comparable to a case where a lady comes across a stranger on the street who suddenly attempts to rape her. An effective term of imprisonment is, therefore, inappropriate in this case.”

The judgment reads: “This is a man whose wife joined him in bed, clad in panties and a nightdress. When life was still normal between them, they would ordinarily have made love. “The appellant must, therefore, have been sexually aroused when his wife entered the blankets. The desire to make love to his wife must have overwhelmed him, hence his somewhat violent behaviour. He, however, neither smacked, punched nor kicked her. Minimum force, so to speak, was resorted to in order to subdue the complainant’s resistance.”

In that instance, the man was initially sentenced to 10 years’ imprisonment after raping his wife, who was eight months pregnant at the time, in front of another person. While upholding the conviction, Mogoeng reduced the sentence to five years’ imprisonment on grounds that “the nature of the complainant and appellant’s relationship is such that it renders their intercourse incapable of being legally categorised as rape”.

Legal experts point out that he was mistaken — at that time marital rape was already deemed illegal under the Family Violence Act of 1993.

He also explained the reduced sentence by saying that the couple had been “lovers for seven years” and that “the assault was not serious”.

Another controversial judgment in the same court, reported last week in City Press, concerns a 2001 case involving a man who tied his girlfriend to the back of his car and dragged her along a gravel road for 50 metres. Eric Mathibe took his girlfriend to hospital only the following day. He was sentenced to two years in prison for assault.

Mogoeng found that the complainant had “provoked” Mathibe and had not suffered serious injuries, even though she had sustained abrasions on her stomach, thigh and knees. Ruling that the sentence was “too severe”, he offered the option of a R4 000 fine.

Based on these and other judgments, public interest law organisation Section 27 was due to lodge an objection on Friday to Mogoeng’s appointment as chief justice with the JSC, on behalf of the Treatment Action Campaign, the Lesbian and Gay Equality Project and Sonke Gender Justice Network.

“It is our firm view that Justice Mogoeng is not suitable for the position of chief justice of South Africa,” reads the submission. “In the cases of gender-based violence, his attitude is quite clear.”

It pointed out that, given the number of gender violence cases that had come before him as a judge, “one would have expected — that he would be familiar with the law in such matters” and would appreciate “that all forms of violence against women are serious crimes with devastating physical and psychological consequences”.

The organisation urged the JSC to ask Mogoeng to explain his reasoning in these judgments and how he was qualified to head the judiciary. It also called on the commission to hold an “open and accountable interview and consultation process”.

Other bodies planning to make submissions to the JSC by the deadline of Friday this week are the Tshwaranang Legal Advocacy Centre and the Women’s Legal Centre.

Tshwaranang director Lisa Vetten said: “Mogoeng needs to read what the Constitutional Court has previously said on domestic violence. In his judgments there is no recognition of the psychological trauma caused, and he is sending the message that the daily trauma of vast numbers of women counts for little.”

A Mafikeng advocate who worked with Mogoeng during the 1980s in Bophuthatswana, who asked not to be named, said that, although Mogoeng “always followed the rules”, “he holds very traditional views in a religious context, which is a product of where he comes from. The position [of chief justice] might have come too early in his exposure in the judiciary.”

The application shows that Mogoeng Thomas Retsang Mogoeng, married with two daughters and a son, comes from the rural village of Goo-Mokgatla in North West province.

After qualifying as an attorney in the Eighties he was chairman of the Bophuthatswana chapter of Lawyers for Human Rights until 1996.

This year he was ordained a pastor in his church, the Winners Chapel, an institution that has sparked controversy by voicing the opinion, shared with right-wing evangelical churches in the United States, that homosexuality is a perversion that can be cured.

In the 2011 Constitutional Court case Le Roux vs Dey Mogoeng raised eyebrows by dissenting from the majority judgment that calling someone gay is not defamatory — without giving his reasons.

Asked in the application form if he has produced any publications in the field of law, Mogoeng answers: “I don’t have any.” Neither had any of his writings been cited in judicial decisions.

Mogoeng writes that a case over which he presided in 1999, Lesapo vs North West Agricultural Bank, “was the very first to address the fundamental right of access to justice”.
He writes that, since 2000, he has, “at the request of the judicial education committee, been involved in training aspirant judges on constitutional law.”