‘Mujuru’s means of escape was so easy’ 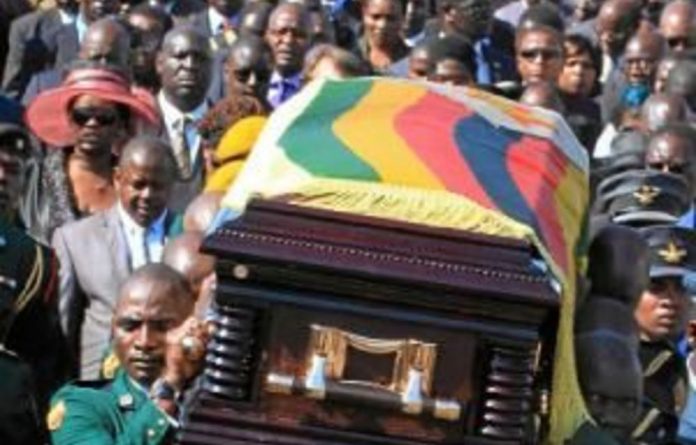 Joice Mujuru has expressed doubts about official accounts of last week’s death by fire of her husband and Zanu-PF kingpin, Solomon Mujuru, providing fodder for a nation long obsessed with conspiracy theories about the deaths of its top political figures.

Solomon, seen as the head of one of two factions vying for control of Zanu-PF, died in a fire at his farmhouse south of Harare last week.

Joice herself and President Robert Mugabe initially urged caution about speculation about the causes of the fire, but rumours surrounding the death of one of Zimbabwe’s dominant political figures have refused to die down.

Speaking in detail for the first time about the circumstances of the former general’s death Joice Mujuru said on August 23 that she could not understand how her husband could have failed to escape the fire in a farmhouse that had easy exit points through large windows and several doors.

“The set-up we had is that in the western part of the bedroom, there are two large windows from my side and from his side, but if you want to go out in an emergency, you don’t have to jump out, you just lift your leg and you are out there,” Mujuru said as she met the women’s national football team visiting her home.

“And our little grandchildren, instead of coming through the door, would jump into our bedroom using those windows. We used to laugh about it.”

She said that the roof of the farmhouse could not have collapsed immediately as a result of the fire, urging investigators to focus on the hours immediately after Mujuru got home. Witnesses say he arrived home at about 8.30pm, after having a drink at a motel 20 minutes from the farm. “That’s where the story is,” she said.

Mujuru spoke of racing to the farm at 3am to find workers battling to put out the raging fire.

More than an hour after it was called, the fire brigade had not arrived. When it did arrive, reports say, it had no water and was forced to collect water from a river a kilometre away.

Police say they have interviewed close to 30 people, among them farmworkers, security workers and even employees of the power utility, Zesa. Police suspect the fire may have been caused by a candle, after a power outage in the area.

But Mujuru said only a full inquest “would make my heart rest”. Police, she said, had engaged all the experts they could lay their hands on to come to a “satisfactory” conclusion about what had befallen her husband.

More than 30 000 people, including Movement for Democratic Change officials and diplomats, attended the former general’s burial in Harare last Saturday.

Joice Mujuru’s remarks are likely to turn up the heat over her husband’s death. Solomon is the latest in a long line of top Zanu-PF officials whose death has been grist to the rumour mill.

In 2008, Elliot Manyika, Mugabe’s party “commissar”, was killed in a car crash. At his funeral, his brother claimed that he had been warned he would die if he travelled on that day. He did not say who had issued him the warning, but his family is still pressing for an inquest into his death. When senior struggle commander and Zanu-PF official Josiah Tungamirai died in 2005, his wife claimed in a newspaper notice that he had been poisoned.

In 2001 Border Gezi and Moven Mahachi, two other Zanu-PF commissars — a job that involves mobilising party structures – died within a month of each other, both in car accidents. And in 1994 Sydney Malunga, a Zanu-PF MP renowned for his brash criticism of government, died in a car crash after his driver tried to avoid a “black dog” that had strayed onto a highway.

The term “seeing a black dog” is today used by Zimbabweans to describe mysterious road deaths.

Zimbabwean conspiracy theories about the deaths of top officials have their origins in the liberation war. The mysterious deaths of several top figures at that time remain unresolved.

In 1975, Herbert Chitepo, who had been head of the Zanu liberation movement and was the most likely figure to emerge as leader after independence, was killed by a car bomb in Lusaka.

Josiah Tongogara, who was military commander, was killed in a car crash on the eve of independence. He, too, had been expected to take up a senior political post.