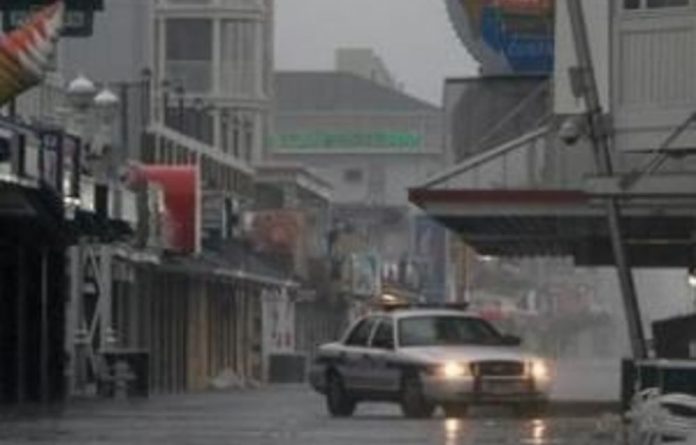 Hurricane Irene blasted ashore near Cape Lookout, North Carolina on Saturday — a weakened but still massive category one storm that has sent tens of thousands of Americans fleeing for safety.

Irene packed sustained winds of 140km an hour as it made landfall, the Miami-based National Hurricane Centre said.

After North Carolina, the hurricane was forecast to churn up the eastern seaboard towards Washington, New York and Boston.

The densely populated corridor, home to more than 65 million people, was under threat of flooding, storm surges, power outages and destruction that experts said could cost up to $12-billion.

Bloomberg told a news conference on Friday that he had ordered the first-ever mass evacuations from low-lying areas across the densely populated city that are home to some 250 000 people, calling it a “matter of life or death”.

“We have never done a mandatory evacuation before and we wouldn’t be doing this now if we didn’t think the storm had the potential to be very serious,” Bloomberg said.

Authorities had earlier announced that New York’s massive transit system would begin to shut down by midday in another rare move that could hinder transport into Monday’s rush hour.

Preparations for emergency repairs
New York state said major links into the city would be cut if winds exceeded 97km per hour, as predicted, and authorities called up 900 National Guard troops and 2 500 power workers to prepare for emergency repair work — the largest ever deployment.

Neighbouring New Jersey on Thursday ordered 750 000 people out of the Cape May area.

Rain and tropical storm-force winds were already pummelling North Carolina and other parts of the coast.

The NHC said Irene would likely remain a hurricane as it passed over or near the mid-Atlantic on Saturday night before churning north towards Canada.

Irene’s approach stirred painful memories of Hurricane Katrina, which smashed into the Gulf Coast in 2005, stranding thousands of people in New Orleans and overwhelming poorly-prepared local and federal authorities.

The popular North Carolina beach resort of Kill Devil Hills was a ghost town Friday, as forecasters predicted up to 38cm of rain in some places and the first power outages were reported.

“We haven’t seen a hurricane threat like this in quite a few decades,” Chris Vaccaro, a spokesperson from the National Weather Service, told Agence France-Presse.

“This is going to be a very long weekend for the residents of the mid-Atlantic and the northeast.”

Irene will be accompanied by an “extremely dangerous” storm surge that could raise water levels by as much as 3.4 meters, the NHC said.

“We’re ordering all of our citizens off the coast,” North Carolina Governor Bev Perdue said, noting that the state could not forcibly eject holdouts but would leave them “at the mercy of themselves and the storm”.

Stocking up on supplies
Further north in Washington, residents packed into supermarkets to stock up on emergency supplies, cleaning out shelves of bottled water and batteries.

In New York’s City Island in the Bronx, local boat owners scrambled to pull vessels out of the water.

Nelson Powell (70) said he had been planning for a year to sail south to Florida but last-minute money problems forced him to postpone the trip — luckily, as he would have been in the storm’s path.

“It worked out for the good. Fate moves in mysterious ways,” Powell told AFP as he battened down his vessel.

Hurricanes are rare in the north eastern United States — the last major hurricane to hit New York was Gloria in 1985.

Obama has spoken with senior emergency officials and local authorities to coordinate federal help, but he warned people to take immediate precautions.

“If you are in the projected path of this hurricane, you have to take precautions now. Don’t wait. Don’t delay,” he said.

The US military said up to 101 000 National Guard soldiers were available if needed and designated military bases in three states as staging areas.

Ships with the navy’s Second Fleet sailed out of their home port in Virginia to ride out the storm at a safe distance, and aircraft cleared off the tarmac at air force bases in three states.

Chuck Watson, research director at Kinetic Analysis, which does computer modelling of predicted storm damage, estimated $11 or $12 billion from Irene in a “worst-case scenario.”

On New York’s Rockaway Beach, Katie Richardson (27) said she and her friends — all in town from Texas — would make the most of their trip to the Big Apple, even if the city shuts down.

“We’re going to ride this out with granola bars and Jameson,” she vowed. — AFP