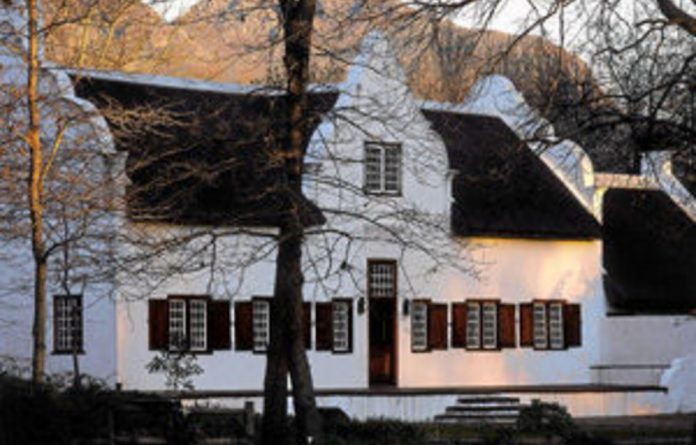 For a start there is Sheila Hlanjwa. About 1.62m, and with a smile just as wide, she’s a one-woman isiXhosa-speaking ball of energy whose sales technique goes: “Why are you drinking that whisky raa-bish when you could be trying my Lathitha wine? Come on, buy a bottle right now —
or else!”

We are in Gugulethu, on the fringes of Cape Town and home to about 340?000 people. It’s about 30 minutes’ drive and one billion light years from the swanky vineyard estates of Stellenbosch and Franschhoek. There has been a murder every two or three days here for the past five years, though in daytime it is generally safe to visit and does not look like a shantytown at all — just a dowdy suburb of small, neat dwellings. We are standing outside the area’s most famous restaurant, Mzoli’s.

“This place is a township phenomenon,” Hlanjwa tells me. “In the last year or two, white people have started coming. It’s fame is spreading.”

Mzoli Ngcawuzele himself shows me his own brand of rosé. “Township drinkers like the rosé,” he grins. “It’s very sweet.”

“When people here see wine, they say: ‘Why should I drink that stuff? It takes six bottles to get drunk!’?” She roars with laughter.

Customers come into the restaurant, buy plates of raw meat — enough to satisfy a small pride of lions — then carry it to the chefs, who braai it to order.

Outside, a few cars are pulled up, the hip-hop is pumping and a multicultural crowd of people are starting to dance.

A new generation
Gugulethu may seem an odd place to begin a wine tour of the Cape but I’m determined to do things differently. Despite a damning report this week from Human Rights Watch, suggesting that the old exploitative ways of apartheid days are intact, there is a wind of change blowing through the staunchly Afrikaner wine business. A new generation of black winemakers and entrepreneurs is forcing the wine trade to re-examine itself and I want to do a tour that reflects this.

With Hlanjwa, I head east out of the township towards the imposing Hottentots Holland mountain range. On the lower slopes of these peaks lie some of the world’s best vine-growing land. We pass venerable old estates: thatched Cape Dutch roofs among the camphor trees, some with a clutch of ostriches grazing on the lawns. Most have tasting facilities.

We turn into Blaauwklippen, one of a select band of wine estates established soon after Jan van Riebeeck tasted the first Cape wine in 1659.

Blaauwklippen has everything: clubby restaurant, shady gardens, children’s play area, horse-and-carriage rides, and, of course, some superlative wines. It is also very white and very wealthy. Twenty years ago, someone like Hlanjwa’s mother, a cook, would have been fortunate to get a job in the kitchen. Now her daughter is planning a range of wines with Rolf Zeitvogel, the chief winemaker, as part of a government-backed black economic empowerment scheme.

“I’m someone who is knocking at the door,” she says, “but I know that the future is for my children.”

Zeitvogel adds: “Sheila took me to Mzoli’s during the World Cup and it was an incredible experience. I knew she’d be good to work with.”

Familial connections
I leave the pair planning their next move. With Platter’s Wine Guide in the car (the bible of South African oenophiles), I have a few stops planned.

First is to meet Vivian Kleynhans, one of seven sisters from the fishing village of Paternoster who started out in the wine trade as a brand name — Seven Sisters, of course.

Initially, they made wine from the produce of other vineyards; now, five years of success later, they are planning their own, on a patch of rough pasture.

“We are going to start planting soon,” says Kleynhans, a smart middle-aged woman. “In five years, you’ll be drinking wine from our own grapes in our own tasting room.”

Pipe dreams
For black people, the history of wine has been largely one of harsh manual labour. Many were paid in wine, and alcoholism among workers was rife. The practice has been banned since the end of apartheid.

My next stop, white-owned Rust en Vrede, is one of the most attractive Cape estates, on the lower mountain slopes. Below the thatched farmstead, with its beautiful terraces and lawns, workers are thinning spring growth on the vines. They earn 20 cents a vine and can make R60 a day.

“We are day labourers,” a man I’ll call Martin tells me. “We get trucked in from Paarl township when they need us.”

Would he like to own a vineyard? Martin laughs: “That is beyond dreaming. I’d like to be a farm manager but getting training is difficult.”

Rising stars
I drive on, stopping briefly in Stellenbosch, a leafy, easygoing town, and home to the university where most of the country’s winemakers are trained.

One of the first black people to go there was Ntsiki Biyela, a Zulu woman who is now head winemaker at Stellekaya winery. Biyela is considered a rising star of the business, with her superb, full-bodied, complex wines. Platter’s Wine Guide gives her reds a four-star accolade.

Biyela and owner Dave Lello are planning a new vineyard for Stellekaya but my next stop is at M’hudi, the only operational black-owned vineyard in Stellenbosch. Run by the Rangaka family, this 42-hectare vineyard has made big strides in less than a decade, and its wines can be found at Marks & Spencer supermarkets in the United Kingdom.

But it has been a struggle, as Lebogang Rangaka explains. “When we started, some of our workers left,” she says. “They said people were laughing at them for working for a black owner.” She makes a face. “It’s a long history — the black mind-set was not to own land. Black wine, you see, is all about land.”

A short distance down the road, Johan Reyneke would agree. He gave up an academic career to enter the family wine business and was determined to do the right thing by his workers.

Attempts to give them shares in the business, however, fell on deaf ears. They wanted houses and education, though some of those given houses subsequently sold them. “The moment was too big for them,” Reyneke says. Others, however, held on and saw property prices soar, and now the vineyard’s Cornerstone workers’ trust is about to send one of the farm girls to university.

The vineyard’s Reyneke Reserve Red 2008 became the first ever biodynamic wine to be awarded five stars by Platter’s. As with other success stories, the real progress is made where sympathetic white owners and wine experts are co-operating with ambitious black colleagues.

That night I stay in Franschhoek, a town that manages to outdo even Stellenbosch for beauty and Cape charm, with leafy streets and whitewashed buildings. It also has one of the best restaurants in South Africa, the Tasting Room. Pausing over my main course of blue wildebeeste, I notice the smart mixed-race clientele, all apparently confident and successful. It would be easy to forget, in such a place, that black empowerment is still in its infancy and many battles are yet to be fought.

Nondumiso Pikashe, a Xhosa woman who works with the renowned Windmeul co-operative winery to make Ses’fikile wines, puts it like this: “Apartheid wore down black people’s self-esteem. That is the big struggle now.”

The wine tour is over, but there is one last place I want to visit. From Cape Town I take the ferry out to Robben Island. The tours are led by ex-prisoners who shared their incarceration with men like Nelson Mandela, Jacob Zuma and Walter Sisulu. As we walk around the exercise yard outside Mandela’s cell, our guide, Dando, points to the spot where the great man secretly buried the manuscript that would become his autobiography, Long Walk to Freedom. And in that corner, a splash of green in this severe and stony world, is a newly-grown vine. —

Wildlife with the Maasai

Tearing knickers off with a growl

Ministrations of the hammam