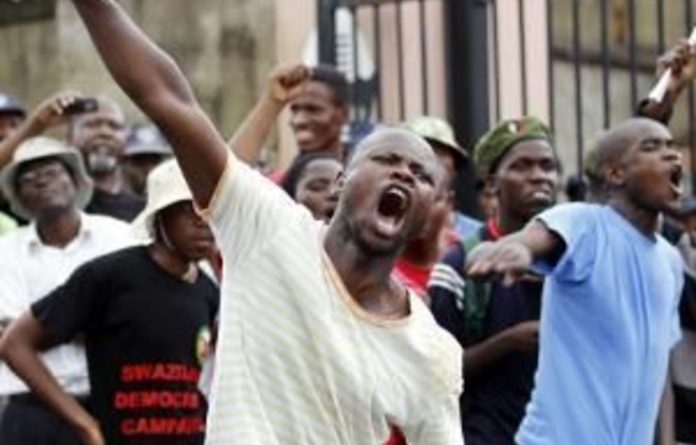 Swazi police fired teargas and rubber bullets to break up a pro-democracy march Wednesday, arresting a top South African union leader who was going to address the crowd, a protest organiser said.

Zingiswa Losi, deputy president of the Congress of South African Trade Unions, was among three people arrested in the southern Swazi town of Sitheki, said Sibongile Mazibuko, head of the Swaziland National Association of Teachers.

“When Cosatu representatives got up to speak, police gathered to remove them. The crowd tried to protect them. There were gunshots [of rubber bullets], teargas. I think they are being taken back to their country,” said Mazibuko, whose teachers’ union is a driving force behind the Swazi protests.

She was speaking by telephone from Sitheki, one of the towns where a coalition of pro-democracy groups was staging a third consecutive day of protests against Swazi King Mswati III, Africa’s last absolute monarch.

Cosatu has vocally supported the protests in Swaziland, and criticised South Africa’s move to grant a R2.4-billion bail-out to the kingdom.

In Swaziland’s main city Manzini, about 1 000 protesters took to the streets for a second day, but were blocked by police from marching to the city centre, where protest leaders wanted to make speeches.

“We want to go to the people. We don’t want to speak to buildings,” teachers’ union official Muzi Simelane said.

Impoverished Swaziland is teetering on the brink of bankruptcy, in a financial crisis that has spawned a series of protests this year to demand that Mswati accept multiparty democracy and resolve a budget crunch that has left the kingdom battling to keep schools and clinics running.

Until this year, public shows of dissent were rare in Swaziland, where the palace tolerates little criticism.

Protests on April 12 were also dispersed by riot police with batons, teargas and water canons, but authorities had allowed marches to proceed in the capital on Monday and in Manzini on Tuesday. — Sapa-AFP