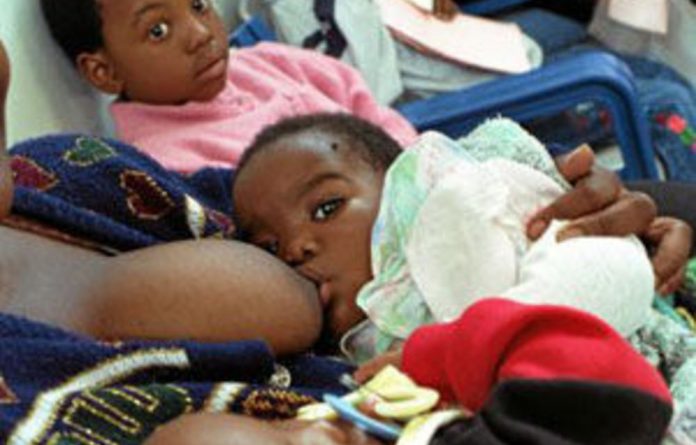 HIV-infected Lindi Sibiya* (36) breastfed her one-year-old son exclusively for the first nine months of his life. “I know bottle milk is safer when you have HIV, but I don’t have a job and so couldn’t afford tinned milk,” said Sibiya, who lives in Johannesburg’s southern suburbs.

Sibiya could not get free formula milk from her local clinic and did not have the money to buy porridge to supplement her baby’s feeding at the World Health Organisation’s recommended six months.

But what she did get free of charge was Nevirapine syrup — antiretroviral medicine to fight HIV — that she could give her child while still breast-feeding him. This, with giving her baby only breast milk for more than six months, drastically reduced his chances of contracting HIV from her.

As a result, Sibiya’s baby is healthy and HIV negative today. “If I could have afforded it, I would have rather bottle-fed my son,” she insisted, however. “The reason is that the child’s chances of getting HIV from formula milk are zero, but with breast-feeding there is still a risk.”

Health Minister Aaron Motsoaledi last month announced a policy of six months exclusive breast-feeding that will effectively ban formula milk from state hospitals. Only mothers with certain medical conditions and bottle milk prescriptions from health workers will be allowed to use it.

Motsoaledi reasoned that South Africa had one of the lowest levels of exclusive breast-feeding and one of the highest infant mortality rates in the world. He said bottle-feeding contributed to babies dying because many mothers did not have access to clean water and sterilising equipment.

But some HIV doctors have been critical of the new policy, arguing that HIV-positive mothers should be able to choose how they would like to feed their children. Medical studies show that, although exclusive breast-feeding lowers HIV-infection rates among babies, mixed feeding — breast as well as bottle milk and solids before six months — greatly increases it.

The solid food and the formula milk seem to damage the sensitive lining of babies’ intestines and in so doing the children often become infected. Until last month the government provided free formula milk for HIV-infected mothers for six months.

This meant that mothers like Ntombi Nkosi (39) of Soweto, who chose to bottle-feed her children, could do so. “I can’t afford formula, but I had to return to my volunteer work and would not have been able to exclusively breast-feed my baby for an entire six months,” said Nkosi.

Nkosi works as an HIV counsellor at her local clinic. It stopped providing free bottle milk shortly after Motsoaledi’s announcement.

“I’m worried for those mothers who can’t access it. Some have to return to their jobs after four months of maternity leave and can’t take their babies with them. They’re likely to end up with infected infants because they’re going to give their children’s nannies food to feed them while they’re at the job,” she said.

“I tell them to not give anything else than breast milk but find them returning after a few months, saying their babies got hungry so they had to feed them solids. Or they forget to give them the Nevirapine on some days. How are we going to protect the babies of those mothers? Mixed ­feeding is part of their culture.”

Eradicating childhood stunting should be a priority in SA