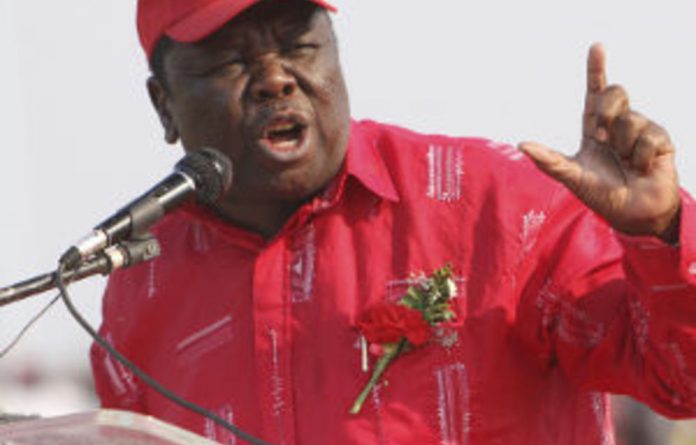 “The inclusive government cannot create jobs because of policy conflict,” Tsvangirai told thousands at a rally to celebrate the 12th anniversary of his Movement for Democratic Change (MDC) party, warning that Zimbabwe’s high rate of unemployment was a time-bomb.

“[President Robert] Mugabe comes out and tells investors ‘your investment is safe.’ The following day [Indigenisation Minister Saviour] Kasukuwere says, ‘I want to close this and that mine.’

Tsvangirai was referring to Mugabe’s reassurances to foreign companies that they will not be nationalised if they comply with the country’s new equity laws.

Within days Kasukuwere threatened to revoke mining giant Zimplats’ licence for failure to submit their plan on how they intend to sell their majority stake to local blacks.

Tsvangirai formed a power-sharing government with Mugabe to avoid a descent into conflict and mend the country’s economy in the wake of a bloody presidential election run-off.

Tsvangirai deplored recent violence in Harare by members of Mugabe’s Zanu-PF party and said his party is ready to go for elections if conditions are conducive for a free and fair vote.

“We want an election but it must be an election with the support of SADC [Southern African Development Community], the African Union and the United Nations,” he said.

“The constitution must be completed as well as the referendum, there should be voter registration for those who are eligible to vote.”

Zimbabwe will go to elections to choose a successor to the shaky power-sharing government but the date is yet to be set.

The MDC was formed in September 1999 at a meeting of labour and civic rights activities concerned about the deteriorating economic situation in the country. – AFP