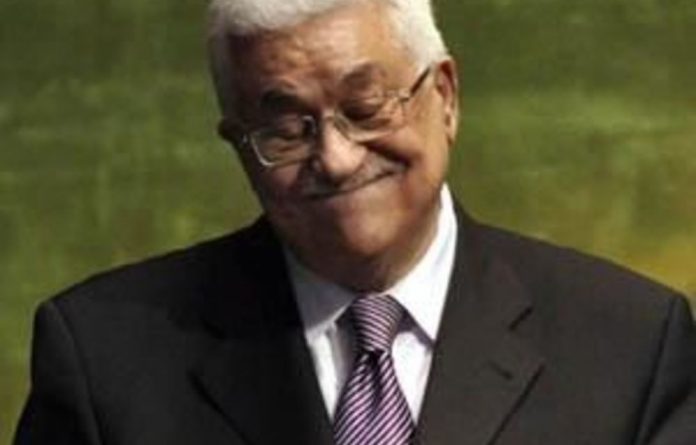 It was the United Nations that determined the fate of the Palestinian people more than six decades ago — and on Friday it was the UN that heard an impassioned plea to change the destiny of Palestine once more.

It came from Mahmoud Abbas, who was 12 years old when the UN General Assembly of November 1947 voted to partition Palestine into two states, one Jewish and one Arab. Abbas’s predecessors, the Palestinian leaders of that earlier generation, famously rejected the partition plan — which envisaged a state on 44% of the land. So the Palestinian president came back to that same body on Friday, asking the UN to bless a Palestinian state on a terrain about half the size.

He did it with a flourish, holding up the formal letter of application he had submitted that hour to the UN secretary general, asking for full membership of the United Nations — a gesture that brought sustained applause from some delegates, impassive silence from others, including the United States and, inevitably, Israel. “It is a moment of truth and my people are waiting to hear the answer of the world,” Abbas said, declaring: “After 63 years of suffering: enough, enough, enough.”

The request for an answer was rhetorical. Abbas knew there was no chance of an immediate vote leading to recognition, not least because the US had promised its veto in advance and had leaned on several other allies to vote no.

But this was not about procedure or resolutions. This was about the Palestinians using the mechanics of diplomacy to grab a rare moment in the international sun, forcing the world to pay attention to their cause. Judged like that, it succeeded, as even the Quartet envoy Tony Blair — no enthusiast for the statehood move — had acknowledged before Abbas came to the podium.

Blair, like Barack Obama, has argued that the best outcome of the Palestinians’ UN initiative will be a restart of direct peace talks, which — echoing the Israeli prime minister, Benjamin Netanyahu, who spoke less than an hour after Abbas — they insist are the only route to true Palestinian independence. But the Palestinian president offered little encouragement on that score.

Justice rather than peace
For his was not the emollient address of a would-be peacemaker, packed with sweet sentiments about children living in harmony or hands reaching across the divide. Instead its emphasis was justice rather than peace, demanding redress for the wrongs inflicted on his people rather than searching for an accommodation with their neighbour.

The language was especially uncompromising, condemning the “colonial military occupation”, “ethnic cleansing” and “the brutality of repression and racial discrimination”. Abbas spoke of “apartheid” — always an incendiary word when applied to Israel-Palestine — and described what Israel calls its security barrier as a “racist annexation wall”.

He gave much for Israeli hardliners to seize on, sentences they will say are evidence that Abbas is not serious about a genuine two state solution or even peace itself. Netanyahu later jumped on that reference to “63 years of suffering” as proof that the Palestinian grievance is not merely the post-1967 occupation, but the existence of Israel itself.

Abbas’s defenders will say the president was simply referring to the long years the Palestinians have endured without statehood, but such is the way this perennial argument operates. Similarly, Abbas will not have made many new friends by describing the Holy Land as the birthplace of Christianity and Islam, but not Judaism. One of the Israelis’ keenest demands is for their neighbours — adversaries — to acknowledge the ancient Jewish connection to the land, including the holy sites in Jerusalem. That sentence will be parsed and parsed again to suggest the Palestinians have not made the crucial leap of acceptance.

It means that while the Palestinian leader might have done himself some good with his own public and wider Arab opinion — defying his reputation as a bloodless technocrat, presenting himself as a fiery advocate — he will not have persuaded many of those whom he will ultimately need to shift, namely the men and women who make up Israeli public opinion.

Nor could those anxious for peace draw much encouragement from Netanyahu’s address. True, he adopted the opposite of Abbas’s approach, speaking of peace from the very start — opening with warm greetings for his Arab neighbours and insisting: “Israel wants peace, I want peace.” But mainly he drew on his familiar catalogue of talking points — denouncing the UN as the “theatre of the absurd”, a place where Gaddafi’s Libya could head the human rights council; warning of the global threat of “militant Islam” and of Iran; stressing how Israel’s every effort for peace, such as the 2005 withdrawal from Gaza, had only resulted in more war. That will have played well back home and worked wonders on Fox News, but will not have won many new friends.

So what the UN witnessed was no match for the historic session of 1947. Instead it saw two leaders talk at cross-purposes, offering two narratives that barely touch. Between them, they revealed to the world that they remain far apart — and that peace is as distant as ever. – guardian.co.uk

Monday's election left the veteran right-winger in prime position to form a government and end a year of political deadlock, after similar votes in April and September proved inconclusive
Read more
Africa

Solomon Teka's death has been a deeply personal tragedy for his family, but for the wider Ethiopian-Israeli community, he has become a symbol as well
Read more
World