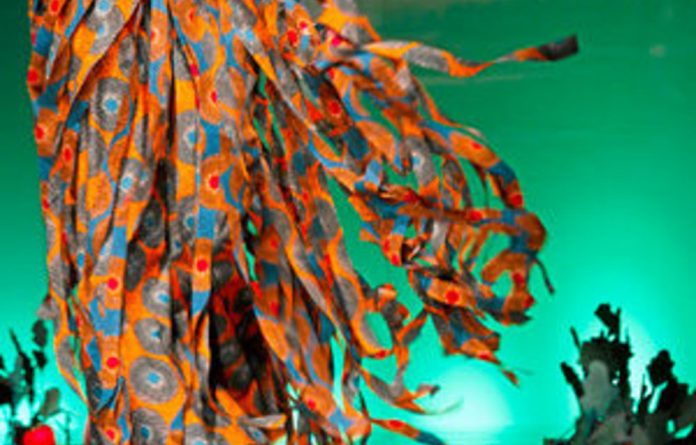 Designer Hangwani Nengovhela, the creator of the Rubicon label, presented a 1940s theme. Rubicon’s catwalk featured the female cast of Isidingo and the range included a rouge-coloured pencil skirt paired with a silky jabot-collared blouse and a lemon-yellow cloche hat. Everything seemed perfectly constructed, from a red pleated skirt to flowing, layered dresses in various shades of purple.

SA Fashion Week launched its Winter 2012 Designer Collections at the weekend at Crowne Plaza in Rosebank, Johannesburg. Reactions to the four-day showcase were mixed as it offered attendees a sneak peek at the key trends for next winter and showcased local talent.

Every piece had complimentary accessories, including caramel-coloured Mary Jane shoes and two-strap sandals, vintage suitcases and fur pieces transformed into a waistcoat or a shoulder drape. The collection had a sort of glamorous Katharine Hepburn feel to it.

International celebrities like Emma Watson and Nicole Richie have been seduced by velvet this winter and Vesselina Pentcheva visibly had this in mind for her 2012 collection. Her full-length evening dresses came in a variety of deep tones including olive, forest green, black, burgundy, emerald and beige. Apart from lace additions and an assortment of sleeves and slits, the gowns were simple and elegant. With the sophisticated draping, rich tones, and contemporary couture look, they added a splash of luxury to evening wear. The lavender pillbox hats were a vintage touch.

African renaissance
The 46664 collection, designed by Chris Vogelpoel, Barbara Tosalli and Craig Native, was a bright new start to the Sunday line-up with its concept of “clothing with a conscience”.

The collection was driven by five themes. A mix of dynamic, bold printed viscose men’s shirts and maxi dresses symbolised the “African renaissance”.

The prints featured the life and times of 46664’s founder, Nelson Mandela, including the ducks he encountered at Victor Verster prison and the tomatoes he grew.

The “rainbow nation” was depicted through colour contrasts, or colour blocking, in blazers, trenches and trousers in cobalt, cerise, green and red in men’s and ladies’ wear. Colour blocking is one of the hottest new trends around and creates a preppy, college look. “It shows the flair and bravado we have in mixing and contrasting colour outfits and never standing back from strong colour,” says Vogelpoel.

Complementing these themes was “soul”, with a series of knitwear items that went from classic black, grey and charcoal to pieces that were created around strong design and colour. The men’s zipper tops with hoods and skinny and twisted jeans were included in an “urban” theme, and the women’s semiformal wear in rich neutrals with highlighted colours celebrated the elegance and sophistication of “Afro-chic”.

Stuttafords is the main stockist of 46664 apparel nationwide. But big corporations such as Edgars, Mr Price and Woolworths are also partnering with local talent, so clothing from the catwalk is become readily available to the general public.

Mr Price contributed in a collaboration with Elle magazine to showcase new talent.

Even though competitor Woolworths was not part of SA Fashion Week, it has also branched out into local design. Since summer 2010, the Woolworths SA Designers collection has featured fashion by selected guest designers in each season.

The gradual move toward supporting local designers will open the doors for many. Though nobody yet falls for the promotional-speak “New York, Paris, London and Jo’burg”, designers are looking to the fashion capitals and style icons for inspiration.

A collection under the label Gugulam presented what could be described as “Michelle Obama meets the Stepford wives”.

An impressive, sophisticated but stiff knee-length beige dress, enhanced by a burst of flowers, had a broad lilac waistband. Inspiration drawn from celebrities like American first lady Michelle and Duchess of Cambridge Kate Middleton was predictable in a globalised fashion environment.

The 46664 collection, meanwhile, showed how a combination of history and enterprise can capture the zeitgeist of the moment.

What would Rich Mnisi do?