Cairo under curfew after 24 Copts killed in clash with army 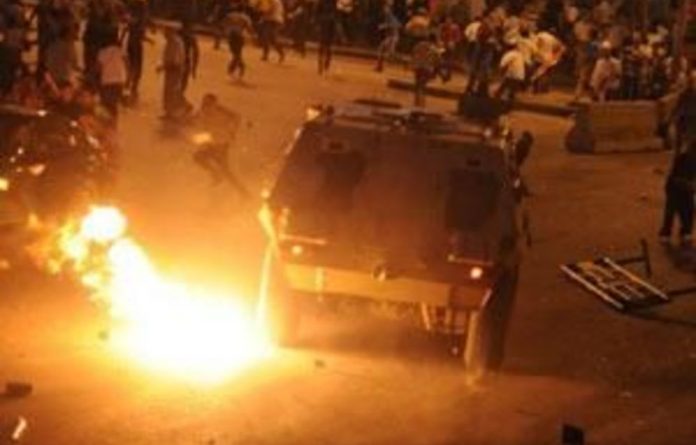 A curfew was imposed overnight in Egypt’s capital after 24 people, mostly Coptic Christians, died in clashes with security forces in the deadliest violence since president Hosni Mubarak’s fall.

More then 200 people were injured in fighting that erupted during a protest by Copts on Sunday, prompting a curfew in central Cairo, said official statements broadcast on public television.

At least five of the dead were mown down by a speeding army vehicle, a priest from the minority Coptic community said, while other bodies were seen with gunshot wounds.

Some activists blamed government-backed provocation for the bloodshed which has triggered fears of worsening sectarian strife.

Prime Minister Essam Sharaf appealed for Egypt’s Muslims and Christians “not to give in to sedition because it is a fire which burns up everybody”.

Egypt ‘in danger’
As the military police gave assurances that calm had returned to the capital, Sharaf warned on public television that Egypt was “in danger” following the most serious clashes since Mubarak was ousted in February.

Sharaf, appointed by the military council that took power after mass protests led to Mubarak’s downfall, heads a caretaker government ahead of elections the council has pledged will be democratic.

A 2am (00h00 GMT) to 7am curfew was declared in the area from Maspero to Abbassiya square, while security was stepped up around parliament and other official buildings in central Cairo.

“These events have brought us backwards … instead of moving forward to construct a modern state on a healthy democratic basis,” Sharaf said.

The clashes broke out during a demonstration in the Maspero district on the Nile, an Agence France-Presse (AFP) correspondent said after counting bodies at a Coptic hospital.

Hospital mayhem
Amid scenes of mayhem at the hospital which was filled with grieving relatives, a priest named Daud told AFP at least five of those killed were mowed down by an army vehicle.

“Here is the brain” of one of them, he said, pointing to white matter in a plastic bag next to the body and disfigured face of a dead man. “Wael, wake up my dear Wael. Speak to me,” sobbed his sister in despair.

State television reported that three soldiers were shot dead and dozens of their comrades wounded as angry Copts wielding batons protested over the burning last month of a church in Aswan, southern Egypt.

“They fired at my colleague. He was standing next to me… Christians, sons of dogs,” one wounded soldier said on the television.

Religious strife
Later Sunday night, hundreds of Muslims and Coptic Christians exchanged blows and threw stones at the hospital treating the wounded from the earlier clashes, an AFP journalist witnessed.

The hospital morgue housed the bodies of those killed.

Some 200 to 300 protesters marched on the hospital to meet up with several hundred Christians already gathered there, including family members of the dead and wounded.

Several cars were set on fire in a wide street next to the hospital, and protesters were tapping the cars to make petrol bombs.

Users of social networking sites such as Twitter said the earlier clashes were provoked by thugs at the scene, while state television was accused of fanning anti-Coptic sentiment.

‘Provoking chaos’
The prime minister said on his Facebook page, “What is taking place are not clashes between Muslims and Christians but attempts to provoke chaos and dissent.”

The protesters clashed with anti-riot police and soldiers guarding the state television building, after thousands took part in a protest march from the Shobra district.

A standoff degenerated as the demonstrators started hurling stones and set fire to two cars. The television channel said that an army vehicle was burnt.

Security forces fired into the air to disperse the crowd, and dozens of people fled.

“Down with the marshal,” the demonstrators chanted on the march to Maspero, referring to Field Marshal Hussein Tantawi, who heads the military council.

Discrimination claims
Copts complain of systematic discrimination, but since Mubarak’s fall, tensions have also mounted between the military — initially hailed for not siding with Mubarak — and groups that spearheaded the revolt, which say the army is reluctant to carry out genuine reforms.

Sectarian clashes are frequent in Egypt, where the Coptic minority, which makes up about 10% of the Muslim-majority country’s 80-million people, has often been the target of attacks.

Hundreds of Copts took part in a protest last Tuesday outside the state television building over the September 30 burning of a church in the southern province of Aswan, demanding that its governor be sacked.

The church in Merinab village was attacked after governor Mustafa al-Seyyed was reported as saying Copts had built it without the required planning permission, according to state television.

Active citizenship, a social contract, Islam and democracy in Egypt