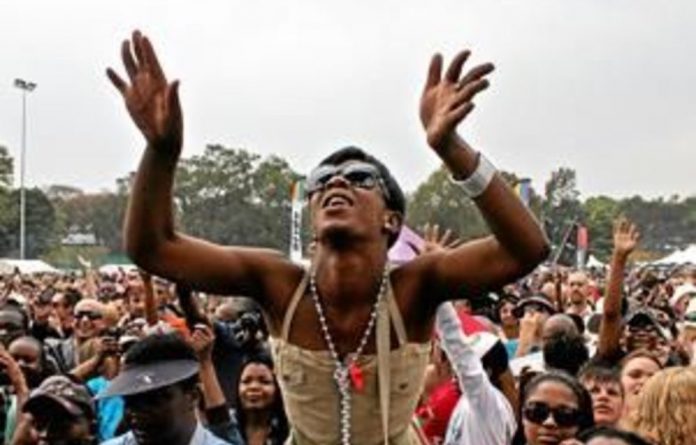 Very few of the lesbian, gay, bisexual and transgender (LGBT) people and their supporters who celebrated Pride month recently could have known of an attack on their constitutional freedoms now taking place in Parliament.

The attack was launched by the National House of Traditional Leaders (NHTL). Its recent submission to Parliament’s constitutional review committee unashamedly proposes an amendment to section 9 of the Constitution, the “equality clause”, which protects citizens from discrimination on the grounds of sexual orientation.

Thousands of colourful and flamboyant demonstrators took to the streets of Johannesburg to celebrate Gay Pride this weekend. We find out what the day signifies to participants, and to hear their advice to young people who might be struggling to declare their sexuality.

In 2005, ahead of Parliament passing legislation enabling same-sex marriage, the NHTL said at its annual conference: “The practice of same-sex marriage is against most African beliefs, cultures, customs and traditions and this in turn goes against the mandate of traditional leaders, which is to promote and protect the customs of communities observing a system of customary law. Traditional leaders have vowed to make it their mission for the coming five years to campaign against this wicked, decadent and immoral Western practice.”

As its parliamentary submission shows, the NHTL has kept that promise. But, according to Parliament’s legal advisers, the proposed amendment would be in contravention of the Constitution, which expressly requires customary law to be consistent with the Bill of Rights.

The NHTL, and its bedfellow, the Congress of Traditional Leaders of South Africa, claim a monopoly on defining African traditions and values. These traditionalists assume the right to define “tradition” and be the arbiters of “legitimate” cultural expression. According to this script, homosexuality is “unAfrican”. Queers and other non-conforming genders and sexualities are disavowed by such exclusionary manufacturing of culture.

The traditionalist lobby wants a social order rooted in immutable apartheid and colonialist categories — black/white, man/woman, gay/straight. It’s no coincidence that these are the very planes of difference where power and privilege have been historically enacted and which continue to mark the frontiers of today’s inclusions and exclusions.

Centralised traditional authorities such as the NHTL are a powerful political force with significant economic interests. They often function in alliance with ruling elites seeking to centralise governance powers. As Ryszard Kapuscinski noted of Ethiopia under Haile Selassie: “While affecting to preserve the past, they [the rulers] were constantly devising new ‘traditional’ institutions to strengthen their control.” Mahmood Mamdani, in the book Citizen and Subject, sees traditional chiefs as “decentralised despots”.

Mazibuko Jara of the Law, Race and Gender Unit at the University of Cape Town speaks of the “retribalisation of the countryside” by traditional authorities and how this undermines citizens’ access to constitutional justice and gender equality.

Unsurprisingly, the NHTL’s submission to Parliament also proposes that its powers be extended by constitutional fiat. It wants to be a “proper parliament of traditional leaders”, for “traditional courts [to] be included as one of the courts”, and asks that “local municipalities be disestablished and be replaced by traditional councils”.

Ironically, the NHTL is reliant on the inequitable power relations (sexual, gender and economic) that our constitutional principles challenge. These principles have led to a wave of gender and sexual-rights claims that contest traditional versions of culture. Women have legally challenged the discriminatory aspects of customary law, African advocates can fight for LGBT equality and an end to homophobic discrimination. In doing so, citizens contest essentialist notions of “culture” and resist those institutions that seek to reinstate undemocratic measures, whether invoked in the name of “Africanness” or “whiteness”.

Cultural practices predicated on discrimination directly undermine the pursuit of equality and freedom. This applies equally to the construction of “Western culture”, with its oppressively whitening impetus. Plurality and diversity are powerful levers to shift oppressive cultural practices and pry open spaces for democratic possibility.

Cultural leaders and institutions do not passively bestow fixed cultures on unsuspecting recipients. Rather, cultural subjects are made and remade, in and through practices that are named and marked as cultural. This dynamic process shapes contemporary iterations of what is deemed traditional and what not. What would it take for non-discrimination to emerge as a shared cultural value, an honoured tradition, owned by all who live in South Africa? Perhaps there is just too much at stake for those who continue to peddle prejudice in the name of “African tradition”.

Melanie Judge is a lesbian activist and social commentator. Read more at queery.oia.co.za