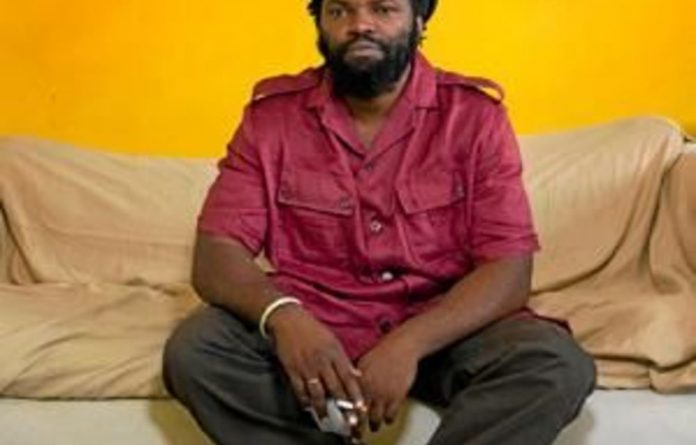 ‘Shock”. “Exceptionalism”. “Paranoia”. Three words that, in a conversation with Chimurenga founder and editor Ntone Edjabe, pop up with greater frequency than tik beggars on Cape Town’s Long Street, a street we were overlooking during our interview this week.

Dressed in a black T-shirt with “Mkwerekwere” (foreigner) emblazoned on the front, the Cameroon-born Edjabe is animated. It is just more than a week to the launch of the literary magazine’s first newspaper, Chronic, and like a sleep-deprived newshound he is feeding off the adrenaline.

Said Edjabe: “Producing a newspaper is the most intense project we have had to do and it is some other shit. It has taken us a year to complete, but there still is that element of urgency that the form imposes upon you … There is none of the luxury of a literary magazine.”

What Edjabe and the rest of the Chimurenga crew (contributors range from Wits academic Achille Mbembe to Mail & Guardian journalist Kwanele Sosibo) have done is to “travel back in time to stage an intervention in the past so as to reimagine the present”.

This they have done by creating a “speculative” weekly newspaper published on May 18-24 2008. It was the week xenophobic violence began to rip through South Africa, leaving a trail of corpses in its wake.

Edjabe said the aim of the newspaper was to move past the two dominant media reactions at the time: shock and exceptionalism.

“But how different is this from genocide in Rwanda [in 1998], the post-election violence in Kenya [in 2007], or how Cameroonians treated the Nigerians who had fled to the country to escape the Biafra war [in the late 1960s]?” he said.

“The poor will always find those even more miserable than them and kick them out of the room. Foreigners have lived in this nation-state for as long as it has existed. The violence is not something you can catalogue as a hate crime. These were not strangers to each other, the victims and perpetrators were people who cooked for each other, slept with each other, lived with each other,” he said.

Paranoia and perceptions of reality
On another level, Edjabe opined, the discourse was laden with “shock — the surprise expressed that this was happening”. Both, he said, ignored the real, everyday socioeconomic and personal realities of all concerned: from murderers to victims and survivors and pointed to a “dislocate” from contemporary reality.

The media’s inadequacies could partly be explained by their “paralysis” because of paranoia relating to their continued relevance in an increasingly digital sector.

Edjabe said the “inventiveness” and “adaptability” in navigating the oppressive conditions, whether economic or political, inherent in the African streets, were ignored by the mainstream media.

This is something Chronic seeks to address.

“This is why, for example, our business section looks at things like migration as business. We have Jean-Christophe Servant’s piece on international remittance and the companies like Western Union that profit from the diaspora,” he said.

Edjabe is highly critical of both the “intellectual laziness” and “lack of creativity and imagination” that exists in mainstream media, academia and among everyday South Africans in attempting to understand the violence and, moreover, their place in a country on the African continent.

“The process I’m interested in with this project is in imagining an alternative way of being and thinking which acknowledges that this way is inextricably linked to a land mass that this country is attached to,” said Edjabe.

To this end there was a “conscious editorial decision to make this a pan-African publication last month”, and Chimurenga hooked up with independent publishers Kenya’s Kwani Trust and Nigeria’s Cassava Republic Press for editorial conceptualisation and distribution.

What this collaborative pan-African intellectual vision has managed to achieve is a mammoth newspaper (replete with a lifestyle magazine and books supplement) that, with its reams of text and generous use of pictures, makes even the word-heavy M&G look like a midget-sized porn-impersonator of a well-endowed original.

Chronic, by way of its pan-African focus and rigour in detailing — in long form in most instances — the street reality consistently ignored
by the mainstream media, also has several “scoops” — the lifeblood of any decent newspaper.

From on-the-ground reportage of xenophobic violence to the rise of the immigrant literary scene in Bloemfontein, from Sean O’Toole’s visual history of Chinua Achebe’s Things Fall Apart (based on various covers since the first edition) to an interview with Black Consciousness Movement artist Lefifi Tladi that spotlights how a narrow, revisionist history of South African art is feeding the ANC’s political hegemony, the Chronic is a cracker. The sort of newspaper you want to open at the end of every week.

The Chimurenga Chronic launches in Johannesburg with an exhibition at the Goethe-Institut Gallery on October 21 from 7.30pm (see chimurenga.co.za for details).

For an online special report and content previews of the paper, go to mg.co.za/chronic