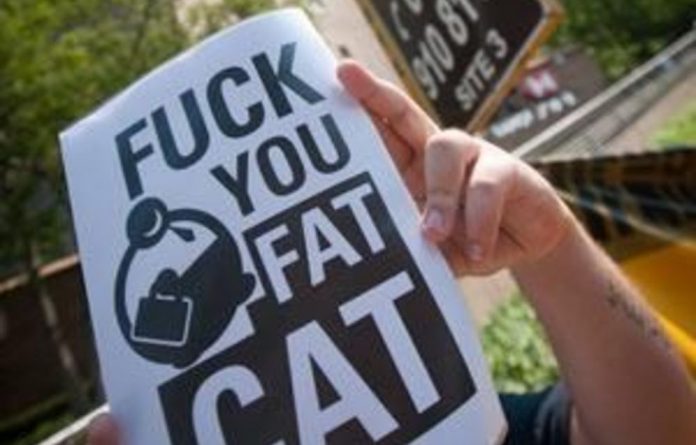 Demonstrators worldwide shouted their rage on Saturday against bankers and politicians they accused of ruining economies and condemning millions to hardship through greed and bad governance.

Galvanised by the Occupy Wall Street movement, the protests began in New Zealand, rippled round the world to Europe and were expected to return to their starting point in New York.

Most rallies were small and barely held up traffic. The biggest anticipated was in Rome where organisers said they believed 100 000 would take part.

“At the global level, we can’t carry on any more with public debt that wasn’t created by us but by thieving governments, corrupt banks and speculators who don’t give a damn about us,” said Nicla Cripp (49) who wore a T-shirt saying “enough” as she arrived at the Rome protest.

“They caused this international crisis and are still profiting from it, they should pay for it.”

The Rome protesters, including the unemployed, students and pensioners, planned to march through the centre, past the Colosseum and finish in Piazza San Giovanni.

Some 2 000 police were on hand to keep the Rome demonstrators, who call themselves “the indignant ones”, peaceful and to avoid a repeat of the violence last year when students protesting over education policy clashed with police.

‘Yes we camp’
As some 750 buses bearing protesters converged on the capital, students at Rome University warmed up with their own mini-demo on Saturday morning.

The carried signs reading “Your Money is Our Money”, and “Yes We Camp,” an echo of the slogan “Yes We Can” used by United States President Barack Obama.

In imitation of the occupation of Zuccotti Park near Wall Street in Manhattan, some protesters have been camped out across the street from the headquarters of the Bank of Italy for several days.

The worldwide protests were a response in part to calls by the New York demonstrators for more people to join them. Their example has prompted calls for similar occupations in dozens of US cities from Saturday.

Demonstrators in Italy were united in their criticism of Prime Minister Silvio Berlusconi and angry at his victory in a vote of confidence in parliament on Friday.

The government has passed a €60-billion austerity package that has raised taxes and will make public healthcare more expensive.

New Zealand and Australia got the ball rolling on Saturday. Several hundred people marched up the main street in Auckland, New Zealand’s biggest city, joining a rally at which 3 000 chanted and banged drums, denouncing corporate greed.

About 200 gathered in the capital Wellington and 50 in a park in the earthquake-hit southern city of Christchurch.

In Sydney, about 2 000 people, including representatives of Aboriginal groups, communists and trade unionists, protested outside the central Reserve Bank of Australia.

‘Real democracy’
“I think people want real democracy,” said Nick Carson, a spokesperson for OccupyMelbourne.org, as about 1 000 gathered in the Australian city.

Hundreds marched in Tokyo, including anti-nuclear protesters. In Manila, capital of the Philippines, a few dozen marched on the US embassy waving banners reading: “Down with US imperialism” and “Philippines not for sale”.

More than 100 people gathered at the Taipei stock exchange, chanting “we are Taiwan’s 99%”, and saying economic growth had only benefited companies while middle class salaries barely covered soaring housing, education and healthcare costs.

“I’ve been against the gap between rich and poor,” Chang said in the northern city of Hsinchu. “The wealth of the top one percent has increased very fast in the past 20 or 30 years.’Occupy Wall Street’ is a reaction to that.”

Demonstrators aimed to converge on the City of London under the banner “Occupy the Stock Exchange”.

“We have people from all walks of life joining us every day,” said Spyro, one of those behind a Facebook page in London which has drawn some 12 000 followers.

The 28-year-old, who said he had a well-paid job and did not want to give his full name, said the target of the protests as “the financial system”.

Angry at taxpayer bailouts of banks since 2008 and at big bonuses still paid to some who work in them while unemployment blights the lives of many young Britons, he said, “People all over the world, we are saying ‘enough is enough’.”

“What is happening in Greece now is the nightmare awaiting other countries in the future. Solidarity is the people’s weapon,” the Real Democracy group said in a statement calling on people to join the protest.

In Paris protests were expected to coincide with the G20 finance chiefs’ meeting there. In Madrid, seven marches were planned to unite in Cibeles square and then march to the central Puerta de Sol.

In Germany, where sympathy for southern Europe’s debt troubles is patchy, the financial centre of Frankfurt and the European Central Bank (ECB) in particular were expected to be a focus of marches called by the Real Democracy Now movement. — Reuters

SA caught up
Reports of an Occupy JSE protest planned for Saturday were circulated widely on social media networks in South Africa.

With the official time set at 8am, protesters said they would be gathering at the Gwen Lane address in Sandton.

By 7am on Saturday morning there had already been a gathering of civil society members outside the building and around the Sandton city centre.

There were reports that people around Gauteng’s townships were also being mobilised to participate in the mass action.

The World Bank needs to return to its mission