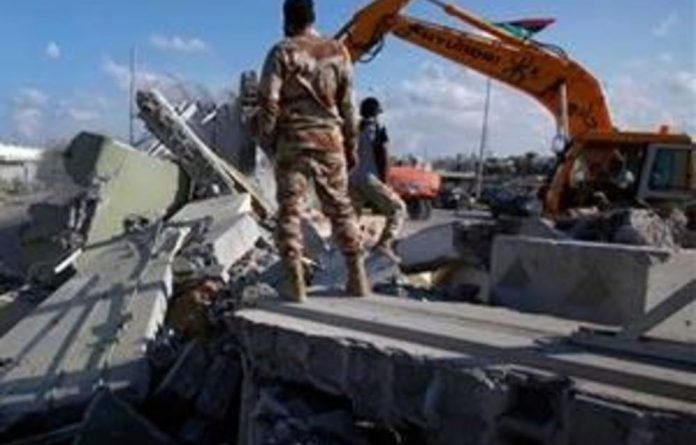 Libyan government fighters battled on Sunday to subdue pockets of resistance by pro-Muammar Gaddafi fighters, whose refusal to abandon the ousted leader’s hometown of Sirte is delaying Libya’s move to democracy.

Ruling National Transitional Council (NTC) forces kept up their bombardment of a small area in the centre of Sirte but there was no push under way from ground troops.

NTC militia have besieged Sirte for weeks, slowly boxing Gaddafi die-hards into an area about two square kilometres. Green flags, the symbol of Gaddafi’s rule, still fly over the area.

Some fighters expressed irritation with their commanders for failing to order and advance and poor communication between brigades.

“There are no orders coming in even though we have the power to push them out,” Hesham al-Dafani, an NTC fighter, told Reuters. “We don’t know what’s happening.”

The failure to seize Sirte — and the other remaining Gaddafi holdout, Bani Walid — has delayed Libya’s democratic transition. The country’s new rulers say the process will only begin once Sirte is captured.

Wanted alive
Fighting also continued in Bani Walid on Sunday, Reuters reporters said, with sniper fire hindering an NTC advance into the city just as it has in Sirte.

Some fighters in Sirte said they suspected that the failure to order an advance was a result of NTC leaders not yet being ready to set out a roadmap for national elections.

Other fighters blamed the delay on a lack of communication between different NTC militias in Sirte.

“We are civilians, we not military people,” NTC field commander, Mohammed al Sabty, said. “We don’t have a certain plan.”

NTC fighters continued to fire on an area known as Neighbourhood Two and said they believed one of Gaddafi’s sons, Mo’tassim, could be holed up there.

“We know that Gaddafi’s Mo’tassim is inside, that’s why they are fighting to the last drop of blood,” Commander Omar Abu Lifa said. “We’re surrounding that area. We are taking it slowly because we want to catch him alive.”

Some NTC sources told Reuters last week that Mo’tassim, a former national security advisor, had been captured as he tried to escape Sirte. But the ruling NTC has yet to officially confirm, or deny, the reports.

NTC officers say Gaddafi loyalists continue to hold out because they fear reprisals if they surrender. Some captured fighters have been abused, rights groups say.

A doctor for the medical aid charity Médecins Sans Frontières (MSF) in Sirte has estimated 10 000 people remain trapped in the city of 75 000 residents. Many are women and children, some are sick or injured.

Gaddafi home bulldozed
Some political analysts say the long sieges of Sirte and Bani Walid risk undermining the NTC which and frustrate its effort to control the whole country.

The often chaotic struggle for Sirte has killed scores of people, left thousands homeless and laid waste to much of what was once a showpiece Mediterranean city where Gaddafi enjoyed entertaining foreign leaders.

The dangers posed by the failure to capture Gaddafi were highlighted on Friday when fighting erupted in Tripoli between NTC forces and Gaddafi-loyalists for the first time since he fled the city in August.

Government forces set up more roadblocks across the city over the weekend, but especially in and around Abu Salim, an area of run-down apartment blocks where the clashes took place.

The area remained calm on Sunday amid the heavy security but nearby a group of armed men with two bulldozers began demolishing the walls around Gaddafi’s former home.

As the bulldozers set about the Bab al-Azizyah compound, a heavily fortified construction spread over six square kilometres that symbolised his repressive rule, men chanted, “God is greatest. This is for the blood of the martyrs.”

Some fired machineguns into the air.

“We are destroying it because we want to demolish anything that belongs to Gaddafi,” one gunman, Essam Sarag, told Reuters.

“We will continue until we destroy everything that belongs to Gaddafi,” said Etman Lelktah, who said he was in charge of the fighters at the scene.

“We ask that a peace organisation be built instead of Gaddafi’s place.”

Grim unease in Sirte hospital
Dr Abdel Latif Milad was showing his visitors around a war-battered hospital in Sirte when a window let in the stench of nine bodies decomposing in the sun outside.

“I don’t know where they came from or who left them there,” said the doctor — adding that they had been dumped in mysterious circumstances in the hospital grounds.

“Sorry but my priority is the living, not the dead,” said Dr Milad, spinning off to do his rounds.

The gruesome discovery only adds to the sense of unease prevailing in Ibn Sina hospital in the south of Sirte, the besieged bastion of forces loyal to fugitive leader Gaddafi.

More than 100 patients, suspected to be pro-Gaddafi fighters, were discovered at the shell-struck hospital when new regime forces seized the establishment last week.

Since then, a reinforcement team has battled to get the hospital up and running again. Most of the patients were evacuated at the insistence of international humanitarian groups.

The International Committee of the Red Cross (ICRC) and MSF has inspected the hospital to ensure patients were being well treated despite having been branded “enemies” by Libya’s new regime forces.

“The strong presence of foreigners acts as a deterrent,” said Barbara Fredericks, the MSF coordinator for Misrata, the closest major city to Sirte.

Behind her, a young man whose face and body were ravaged by burns strolled aimlessly through the hallways.

“We have already evacuated 35 people to Misrata and Tripoli in three days,” said Karen Strugg who heads the Red Cross office in Misrata, adding that the rest should be transferred from Monday.

Decomposing bodies
Back in the Ibn Sina hospital courtyard, littered with trash and debris, a small team of doctors took on the task of wrapping the nine decomposing bodies in a white bag, laying them on stretchers.

In a cloud of flies, a doctor with a blue blouse, surgical mask and latex gloves examined the dead, dressed in civilian clothing but with no identification papers.

“At least three of them were shot in the head,” said Dr Imad al-Fassi, while an Agence France-Presse reporter saw one with a smashed skull.

Doctors said the time of death dated back to “at least a week.”

Half an hour later, several members of a Libyan NGO set up to provide medical support to forces of the NTC who reached the hospital.

“We are here to recover the bodies,” said Faraz Mahdawi. “Some of them were executed. We must bury them.”

Mahdawi was convinced the corpses were those of NTC fighters killed by Gaddafi loyalists.

But a foreign observer warned against jumping to conclusions. “It could also be the other way around. It’s hard to tell without DNA tests,” he stressed.

“These kinds of cases are likely to increase. We must verify absolutely everything before announcing anything,” he said amid rumours that 18 corpses, apparently of executed men, had been found in Sirte, near the hospital. — AFP, Reuters