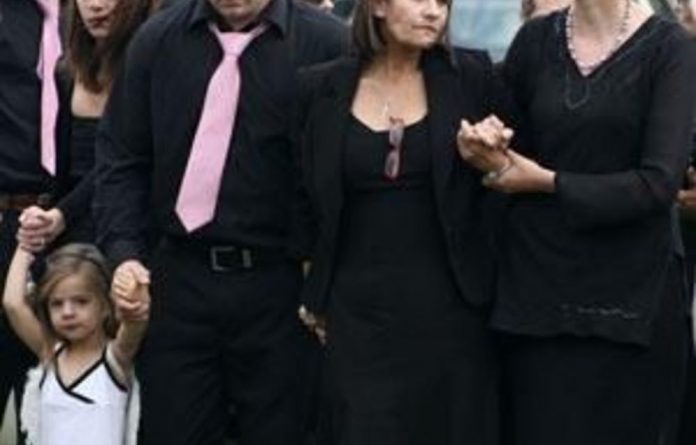 Family and friends of murdered pupil Louise de Waal paid their last respects at her memorial service on Wednesday at Horskool Die Burger in Roodepoort.

Pupils moved to the front of a packed marquee to lay pink and white flowers at the foot of a wooden cross, which was surrounded by pictures of their smiling friend.

A girl played the song Over the Rainbow on her saxophone as De Waal’s family looked on from the front row.

The service in the school’s sports field ended with mourners proceeding outside to watch white doves and pink balloons being released into the sunset.

De Waal was abducted a week ago while walking to school with a friend. She would have turned 17 last Sunday. Instead, her burnt body was found on a farm in Magaliesburg.

The education department said it was unacceptable that she had been “unceremoniously and brutally savaged”.

“Security at this school is going to be beefed up because all of our schools should be safe havens,” said provincial education district director Dennis Macuacua.

“Let us also make sure we accompany our learners to school.”

Macuacua condemned an attempt at a similar crime that took place near the school on Wednesday morning.

According to Gauteng police, an 18-year-old girl was sitting on a pavement near the school at 6am when a man threatened her with a screwdriver and tried to force her into the boot of his car.

She was rescued by police, and a 21-year-old man was arrested.

During the memorial service, De Waal was described as intelligent and one of the brightest girls in her class.

“She was never pushed to go to school … you could see her level of commitment [by walking to school every day],” Macuacua said.

Principal Basie Smit said De Waal was to have received certificates for two distinctions in a few weeks, as well as a prefect’s blazer.

He presented the blazer and certificates to her mother Shireen, who then collapsed and burst into tears.

De Waal’s sister, Jessica de Toit, appeared briefly on stage, managing to say: “We love and miss you Louise”, before being comforted and moved away by male relatives.

The family thanked investigating officer Peet du Toit for his efforts in solving the crime.

Through Du Toit’s investigations, Johannes Jacobus Steyn was arrested and confessed to being the so-called Sunday rapist. He is yet to be formally charged with De Waal’s murder.

Steyn faces 13 charges of rape, 10 of kidnapping, one of murder and six of sexual assault. — Sapa