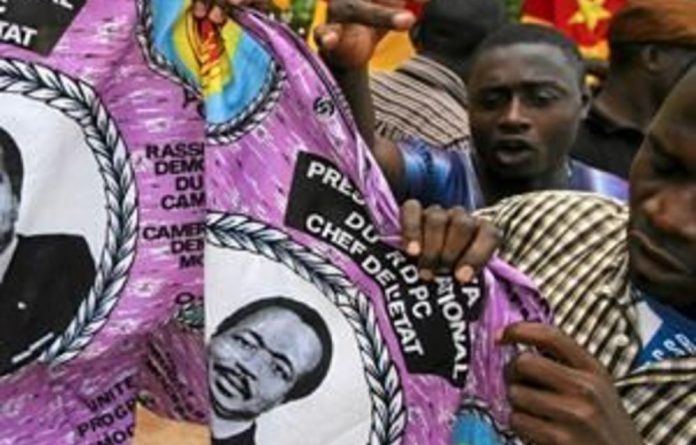 Cameroon’s President Paul Biya (78), in power since 1982, was re-elected by 77% of the electorate on October 9. He is routinely compared to other long-serving African autocrats including Zimbabwean President Robert Mugabe and Teodoro Obiang of Equatorial Guinea.

Married to a woman 38 years his junior, Biya spends “working holidays” of up to three months in Geneva. In February 2008, when the country’s constitution was amended to scrap term limits, taxi drivers started a revolt in which 200 people died.

The Mail & Guardian spoke to Achille Mbembe, a Cameroonian political theorist and historian based at Stellenbosch University, about what drives African autocrats like Biya and why they survive so long.

Were the elections free and fair?
In the present circumstances, the possibility of free and fair elections in Cameroon is quasi-nil. There is no independent institution in charge of administering elections. Elecam, which stands for such an institution, is controlled by the ruling party and most of its members are known to belong to that political formation. The entire state apparatus, from the bureaucracy to the police, the military and the official media, is mobilised to campaign for the incumbent. Even to talk about “elections” under such conditions is simply farcical.

Three decades at the helm and they continue re-electing him. And he does not seem to have campaigned much. Cameroonians must love him.
He firmly holds them by the balls. He has understood that, in order to stay in power, he needs to do nothing at all. He has invented a style of rule we should call “government by inaction”, a form of spectral government that doesn’t even require him to be in his country for long periods.

In fact, he spends much of his time either in the Intercontinental Hotel in Geneva or in his village. He hardly ever holds a Cabinet meeting. He doesn’t even seem to recognise some of the Cabinet members he himself has appointed.

If ordinary Cameroonians are tired of his leadership, how will change come?
It won’t be the result of peaceful elections. Many citizens are disillusioned and are fast coming to the realisation that for change to happen might require a modicum of violence. The problem is that the social forces capable of organising such a violent revolt are missing.

Some opposition figures seem to be in bed with the government. Is there an opposition or a vibrant civil society?

The opposition is not only frag­mented, it’s short of money and imagination. Corruption and venality are rife. Civil society is emasculated. Most people are struggling for daily survival. They are told — including by the churches — that peace at all costs is better than the quest for justice, freedom and dignity.

What does Biya have in common with Africa’s other strongmen?
Senility. A pure libidinal approach to power. This is a kleptocracy that is ruled by a gerontocracy. The combination of kleptocracy, prebendalism [political patronage] and gerontocracy has made of Cameroon the equivalent of Haiti in Africa. The country has been nominally independent for 50 years but has almost nothing to show for it.

Why does he hold on to power? Is he scared of being prosecuted if he leaves office? Will his end follow those of Gaddafi, Mubarak or Kamuzu Banda?
He firmly believes that power has no other purpose than [to be] power for its own sake. Power is pure expenditure, pure jouissance — enjoyment. Biya, his wife and most of the ruling elite are bound by a common belief in the hedonistic nature of power.

Under such circumstances, death by jouissance is the only conceivable way to relinquish it.
Precisely; his hope is to die exactly in that manner.

When conflict and Covid-19 disrupt schooling and devastate the economy, girls drop out, and teen pregnancies rise
Read more
Africa

Cameroon is not learning the governance lessons offered by Covid-19

Citizens of Cameroon are unable to trust their government’s handling of the Covid-19 pandemic, given cases of ministers flouting restrictions, as well as allegations of corruption. This does not bode well for state responses to future crises
Read more
Africa