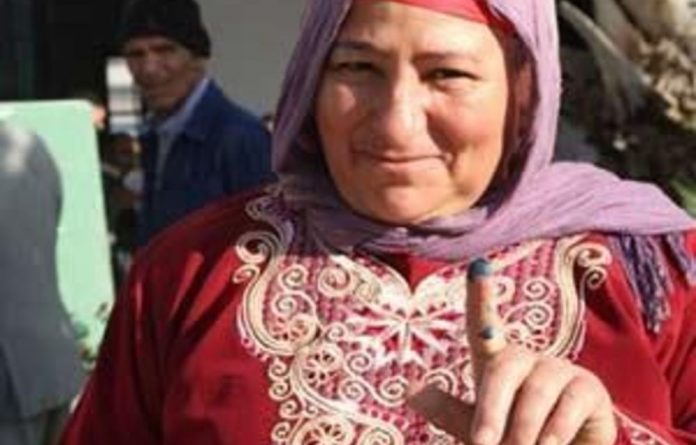 Tunisian voters poured into polling stations to vote on Sunday in their country’s first free election, 10 months after a vegetable seller set fire to himself in an act of protest that started the Arab Spring uprisings.

The leader of an Islamist party predicted to win the biggest share of the vote was heckled outside a polling station by people shouting “terrorist” — highlighting tensions between Islamists and secularists that are also being felt in other countries touched by the Arab Spring.

Rachid Ghannouchi, leader of the moderately Islamist Ennahda party, took his place in the queue outside a polling station in the El Menzah 6 district of the capital.

“This is an historic day,” he said, accompanied by his wife and daughter, who were both wearing hijabs, or Islamic headscarves. “Tunisia was born today. The Arab Spring was born today.”

But as he emerged from the polling station about a dozen people shouted at him: “Degage” French for “Go away” and “You are a terrorist and an assassin! Go back to London!”

Ghannouchi, who spent 22 years in exile in Britain, has associated his party with the moderate Islamism of Turkish Prime Minister Tayyip Erdogan. He has said he will not try to impose Muslim values on society.

But the party’s rise is worrying Tunisia’s secularists who believe their country’s liberal, modernist traditions are now under threat.

Snaking queues
Across Tunisia, queues stretching hundreds of metres formed outside polling stations from early in the morning for an election which could set the template for other Middle Eastern states emerging from the Arab Spring.

The level of voter interest was never seen during Ben Ali’s rule. Then, only a trickle of people turned out for elections because they knew the result was pre-determined.

People in the queues took photographs on their mobile phones to mark the occasion.

“This is the first time I have voted,” said Karima Ben Salem (45) at a polling station in the Lafayette area of central Tunis.

“I’ve asked the boys to make their own lunch. I don’t care … Today I am not on duty. Or rather, I am on duty for my country,” she said.

There were long lines of voters too in Sidi Bouzid, the dirt-poor birthplace of the Tunisian revolution and Mohamed Bouazizi’s home town.

Islamist influence
Sunday’s vote is for an assembly that will draft a new constitution to replace the one Ben Ali manipulated to entrench his power. It will also appoint an interim government and set elections for a new president and parliament.

Most forecasts are that Ennahda will not have enough seats for a majority of its own in the assembly, forcing it to seek a coalition which will dilute the Islamists’ influence.

It will have to compete with secularist parties, who will try to patch together a coalition of their own to stop Ennahda forming a majority.

Ennahda has been at pains to assuage the concerns of secularists and Western powers. But observers say there is tension inside the party between Ghannouchi’s moderate line and more vehement Islamists among the rank-and-file.

A final election rally on Friday illustrated the party’s contradictions. Suad Abdel-Rahim, a tall, glamorous Ennahda candidate who does not wear a veil, addressed the crowd.

But many books on sale on the fringes of the rally were by writers who belong to the strict Salafist branch of Islam. They believe women should be segregated from men in public and that elections are un-Islamic.

“I’m not so optimistic about the result of the vote,” said Ziyed Tijiani, a 26-year-old architect who had just cast his vote. His forefinger was stained with the blue ink used in polling stations to stop ballot fraud.

“I think the Islamists could win. It’s not want I want. They may try to change the way I live,” he said, accompanied by a young woman dressed who was in jeans and T-shirt.

Fears of conflict
An Ennahda victory would be the first such success in the Arab world since Hamas won a 2006 Palestinian vote. Islamists won a 1991 election in Algeria, Tunisia’s neighbour. The army annulled the result, provoking years of conflict.

Ennahda’s fortunes could have a bearing on Egyptian elections set for next month in which the Muslim Brotherhood, an ideological ally, also hopes to emerge strongest.

Tunisia’s election will be watched too in neighbouring Libya, which plans to hold elections next year after a revolt there ousted Muammar Gadaffi.

In the wake of the Arab Spring, unresolved violent conflict continues in Syria and Yemen and many other governments have offered limited reforms to try to stave off unrest. — Reuters