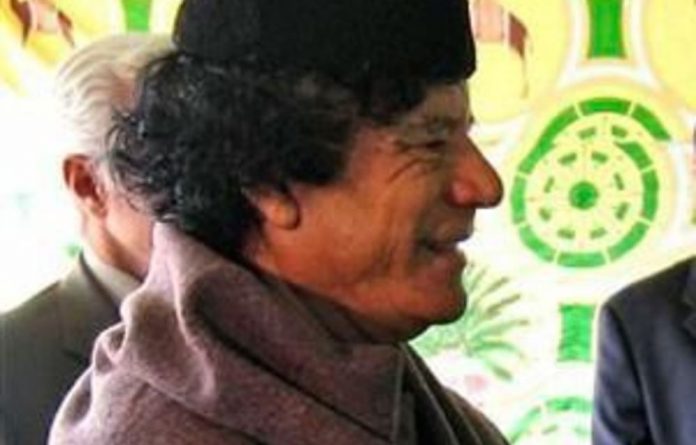 Ousted Libyan leader Muammar Gaddafi was buried at dawn in a secret desert grave, ending a wrangle over his body that led many to fear for Libya’s governability.

With their Western allies uneasy that Gaddafi was roughed up and shot after his capture on Thursday, NTC forces had put the body on show while they argued over what to do with it, until its decay forced them on Monday to close the doors.

The killing of the 69-year-old in his hometown of Sirte brought to a close eight months of war, finally ending a nervous two-month hiatus since the motley rebel forces of the NTC overran the capital Tripoli.

An NTC official had told Reuters several days ago that there would be only four witnesses to the burial, and all would swear on the Koran never to reveal the location.

NTC fears that Gaddafi’s sons might mount an insurgency have been largely allayed by the death of two of those who wielded the most power, military commander Khamis and Mo’tassim, the former national security adviser.

Mo’tassim was captured along with his father in Sirte and killed in similarly unclear circumstances, and an NTC official had said he would be buried in the same ceremony on Tuesday. Khamis was killed in fighting earlier in the civil war.

Saif al-Islam at the border
But he said Gaddafi’s long-time heir apparent Saif al-Islam was in the remote desert far south of Libya and set to flee the North African state, with the NTC powerless to stop him.

“He’s on the triangle of Niger and Algeria. He’s south of Ghat, the Ghat area. He was given a false Libyan passport from the area of Murzuq,” the official added.

He said Muammar Gaddafi’s former intelligence chief Abdullah al-Senussi who, like Saif al-Islam, is wanted by the International Criminal Court, was involved in the matter.

“The region is very, very difficult to monitor and encircle,” he said. “The region is a desert region and it has … many, many exit routes.”

The death of the fallen strongman allowed the NTC to touch off mass rejoicing by declaring Libya’s long-awaited “liberation” on Sunday in Benghazi, the seat of the revolt.

No central control
But it also highlighted a lack of central control over disparate armed groups, and the jockeying for power among local commanders as negotiations begin in earnest to form an interim government that can run free elections.

“Leaders from different regions, cities, want to negotiate over everything — posts in government, budgets for cities, dissolving militias,” said one senior NTC official in Tripoli, though he defended this as a healthy expression of freedom.

“Is that not democracy?” he asked. “It would be unusual if they did not [negotiate] after Muammar favoured only a few places for 40 years. There is no reason why it cannot be peaceful.”

In Misrata, Libya’s long-besieged third city, whose war leaders want a big role in the peace, fighters handing out surgical masks on Monday against the stench were still ushering hundreds of sightseers into the chill room where the bodies of Gaddafi, his son Mo’tassim and his former army chief lay on the floor, their flesh darkening and leaking fluids.

‘Show’s over’
Officials at one point declared the show was over, closed the gates and started turning people away. “That’s enough,” said one of the guards. “He’s been causing us as much trouble dead as he did alive.” But within an hour, there was a change of plan as dozens more sightseers arrived and were shown in.

The killings near Sirte, after mobile phone video footage was taken showing the captive Gaddafi being beaten and mocked by fighters apparently from Misrata, are also a matter of controversy — at least outside Libya. The United Nations human rights arm has joined the Gaddafi family in seeking an inquiry.

NTC chair Mustafa Abdel Jalil told a news conference on Monday that the NTC had formed a committee to investigate.

He also indicated that the interim authorities still held to an official line that Gaddafi may have been killed in “crossfire” with his own men, a view many NTC officials themselves seem ready to discount.

“Those who have an interest in killing him before prosecuting him are those who had an active role with him,” said Abdel Jalil, who like many of the new leadership held positions of authority under Gaddafi.

Adding to concerns about Libya turning over a new leaf on respect for individuals, New York-based Human Rights Watch called on the NTC to probe an “apparent mass execution” of 53 people, apparently Gaddafi supporters, whom it found dead, some with their hands bound, at a hotel in Sirte.

Grim parody
Few Libyans seem troubled either about how Gaddafi and his entourage were killed or why their corpses were displayed for so long in what seemed a grim parody of the lying-in-state often reserved for national leaders.

“God made the pharaoh as an example to the others,” said Salem Shaka, who was viewing the bodies in Misrata on Monday.

“If he had been a good man, we would have buried him. But he chose this destiny for himself.” — Reuters