Was the president pushed or did he jump? 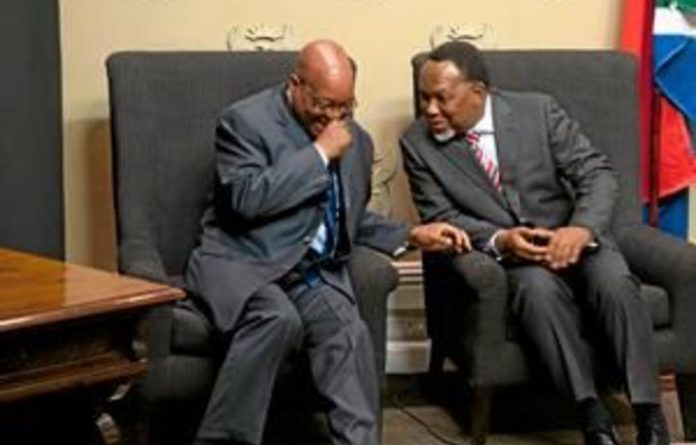 Some observers believe this week’s Cabinet shuffle was the moment when Jacob Zuma finally showed that he was a decisive leader. Others believe it was the turning point for the emergence of the Public Protector’s office as the most powerful institution in our democracy.

Presidency spokesperson Mac Maharaj prepared the ground for the shuffle by first disputing that Zuma was indecisive and, secondly, arguing that when the president decides to act it should not be interpreted that he does so with an eye on the ANC’s conference in Mangaung in 2012 at which new leaders will be elected.

Maharaj’s statement was issued four days before Zuma finally fell into line with what the opposition and the media had been calling for by axing ministers Sicelo Shiceka and Gwen Mahlangu-Nkabinde and suspending the police’s national commissioner, General Bheki Cele.

The University of South Africa’s deputy registrar, Professor Tinyiko Maluleke, said the people Zuma removed were not powerful politically and were unlikely to cause any damage to his political ambitions. “He has basically shed excess baggage. Sicelo Shiceka was the easiest person to reshuffle for the weakest president in the world. He had not been to work in eight months and he had been accused of corruption.”

Both Shiceka and Mahlangu-Nkabinde’s dismissal was expected, said Maluleke. “I don’t think he benefits or loses much from this reshuffle. But the reason he reshuffled his Cabinet — corruption — is very important.

“It sends a signal that this is the president who will not stand corruption. This is where he’ll gain some mileage. It sends a good signal to those within the ANC who have been complaining about corruption. But the delay in reshuffling Shiceka almost eroded the good faith that should have come with it.”

Talking of Crawford-Browne’s dogged pursuit of the reopening of the arms deal investigation, Maluleke said: “It shows that this is the president who is scared of litigation. He is a bit uncertain on litigation issues, and if you take him to court he’ll definitely act. He crumbles under a particular type of pressure”. Maluleke said Zuma had carefully chosen the ministers to shuffle to avoid a possible political backlash.

“He dismisses the ministers he can dismiss and suspends the police commissioner he cannot dismiss,” he said, referring to Cele’s position as one of the most powerful ANC politicians in KwaZulu-Natal.

Zuma also used Madonsela to help him fight successful political battles, said Maluleke. “Thuli is the best thing that could ever have happened to Zuma. She gives him the tools and ammunition he needs to act — something he wouldn’t have been able to do on his own, given the political climate.

However, some people in the upper echelons of the ANC have questioned what Zuma’s reshuffle says about the Public Protector and her powers. A party leader in government, who was not authorised to comment officially, said by essentially accepting Madonsela’s findings and acting exactly in accordance with her wishes, Zuma had created a precedent for all her future findings being treated as “law”.

“If she investigates and finds you guilty — and I am not even sure that she should be finding people guilty — it will be difficult in future not to act on her findings.

“Imagine a situation where she gets it wrong: the president would still be expected to take action. By default we have given her more powers. “Unlike any other reshuffle before, this is Madonsela’s reshuffle, not a Zuma one. “Although it is good and important to show that government takes her work seriously, this precedent could come back to haunt us.”

In the original version of this story, the University of South Africa’s deputy registrar, Professor Tinyiko Maluleke’s title was incorrectly stated as executive director of research. This was corrected on October 28 2011. We apologise for the error.

The sacrifice in the fight for freedom and Zuma, the freedom fighter, should be honoured, but his presidency will be counted among history’s follies.
Read more
National

​Documents seen by the M&G have reopened questions on a Scorpion investigation regarding a series of payments to the presidential spokesperson.
Read more
National

The former presidential spokesperson's stay at a luxury housing estate in Pretoria "could amount to flagrant abuse of public resources".
Read more
Advertising
Continue to the category
National