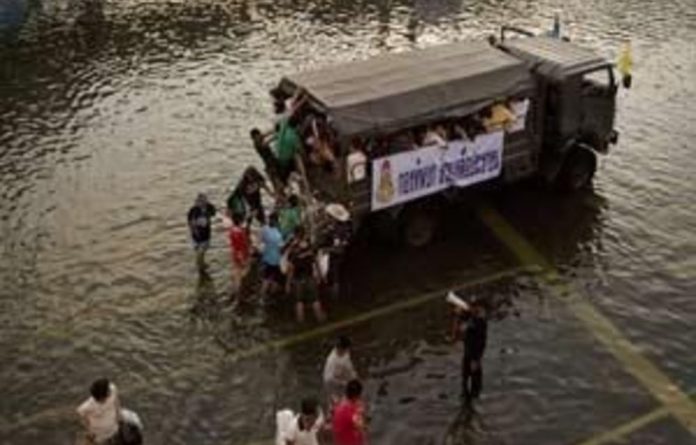 Tensions were rising between Thai residents and authorities in flooded parts of Bangkok on Monday, with hundreds protesting that their homes were being sacrificed in attempts to keep the city centre dry.

Police said 200 to 300 people gathered to demand the wider opening of a sluice gate in the northeastern district of Khlong Sam Wa, but the officials held firm and at one point formed a human chain to keep back the villagers.

“The FROC (Flood Relief Operations Centre) has asked the army to send personnel to areas where it has conflicts. The army has sent 200 military police to back up police forces,” said Defence Minister Yuthasak Sasiprapha.

Hopes are growing that central Bangkok will be spared from major inundation after barriers along Bangkok’s swollen Chao Phraya River prevented a major overflow during a spring high tide over the weekend.

But the United Nation’s office for the coordination of humanitarian affairs (OCHA) said the situation remained “critical” in several flooded districts in northern and western city areas, some with water levels rising above one metre.

“Meanwhile, tensions are being reported between the authorities and local residents who fear that floodwalls are preventing water from draining out of their districts,” the OCHA statement said.

It said a group of residents destroyed a dyke in northern Don Mueang on Saturday, causing a huge volume of floodwater to flow into the Prapa canal, which supplies tap water to Bangkok.

“The military has deployed 50 000 troops across the country to guard and maintain the flood barriers,” said the statement.

Paying the price
Villagers in Khlong Sam Wa, who also blocked two roads on their second day of protest Monday, said they were paying the price to keep Thailand’s capital and economic heartland free from the kingdom’s worst flooding in decades.

“My house has been flooded for two months now and in the last two weeks it’s got worse,” Samorn Sohwiset (43) told Agence France-Presse. “I’ll stay here until they open the gate.”

Another young male villager, who was digging an irrigation channel to bypass the gate and allow water to pass to the other side, said officials only cared “for the rich people”.

The Bangkok Metropolitan Administration (BMA) said that fully opening the gates would threaten key areas of the capital.

“We don’t want a group of people to affect our long-term plan,” said BMA spokesperson Jate Sopitpongstorn. “We take care of the overall situation.”

The three-month crisis — triggered by unusually heavy monsoon rains –has left at least 381 people dead around the kingdom and damaged millions of homes and livelihoods, mostly in northern and central Thailand.

The crisis has forced the shutdown of thousands of inundated factories, disrupting supply chains and putting more than half a million people temporarily out of work.

Prime Minister Yingluck Shinawatra said the government had made plans to rehabilitate industrial estates, but that it could take three months to get them up-and-running as normal.

Japanese automaker Honda on Monday held off giving an earnings forecast for the year ending March 2012 as it continued to assess the impact on its operations of the Thai floods, which have forced it to halt production there. — AFP