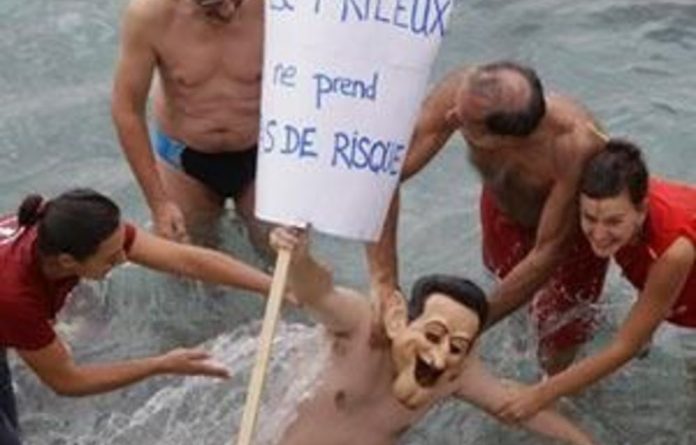 European leaders summoned Greek Prime Minister George Papandreou to the French Riviera on Wednesday to restore calm on the eve of a Group of 20 summit after his shock call for a debt rescue referendum raised the spectre of Greece leaving the eurozone.

French President Nicolas Sarkozy, German Chancellor Angela Merkel, top European Union (EU) leaders and the head of the International Monetary Fund (IMF) were set to meet with Papandreou to discuss the implications of his referendum plan.

“France and Germany decided to convoke Papandreou to explain the situation before the G20 meeting of advanced economies on Thursday and Friday in Cannes, a French government official told Agence France-Presse.”We have to act quickly.”

Europe has come under intense pressure from its G20 partners to contain its debt crisis and after hard-fought negotiations last week came up with a deal that would wipe €100-billion off Greece’s debt, strengthen banks to weather those losses and more than double the firepower of its bailout fund.

But Papandreou shocked Europe and the financial markets on Monday evening with his announcement that he would put the deal to voters in a referendum.

With Greek voters bitter after enduring over a year of painful austerity measures, markets were spooked by the possibility that it could be rejected which would likely mean the country would go bankrupt and be forced to leave the eurozone.

The turmoil saw some European markets slump by 5% or more on Tuesday and pushed borrowing rates uncomfortably near record levels for Italy whose economy is already giving cause for concern within the eurozone.

A French government source said Sarkozy and Merkel were set to deliver a clear message to Papandreou on Wednesday: that the referendum should be on whether the Greece stays or not within the eurozone.

That would be the first time that France and Germany so explicitly raised the possibility of a country abandoning the euro — hitherto a taboo subject.

A European governmental official said, “That would be unfortunate for Greece as their fate outside the eurozone would be much worse than the solutions currently proposed. But if that’s what they decide, then well, let them go!”

But the eurozone will continue to support Greece if it wants to remain in the single currency and presses ahead with necessary reforms, German Finance Minister Wolfgang Schaeuble said.

“If Greece will accept the burden and efforts required by the aid programmes, if it wants to stay within the eurozone then we will support it,” Schaeuble told the daily Financial Times Deutschland in an interview.

“The crisis can only be overcome if we stick together,” he said.

Schaeuble said he was confident the Greeks would not vote against the EU debt deal in a referendum.

“I believe in the power of arguments,” he said. The second aid package for Greece agreed by Europe’s leaders last week offered “the best guarantee for Greece to return to health in a manageable way and get back onto its legs on its own.

“I expect that Greece will respect and fulfil its agreements and duties,” the minister said.

Plans to prevent recession
The Greek referendum announcement blew out of the water European hopes to show up at the G20 summit which is set to grapple with how to prevent the world economy from slipping into a recession with a plan to deal with its debt crisis.

Asian G20 members China, Japan and India heaped further pressure Wednesday on Europe to get its house in order.

China’s official Xinhua news agency called on EU leaders to persuade Greece to “drop the referendum idea” or help them find a “better solution to their political embarrassment”.

It also said “urgent efforts must be taken to prevent the rescue plan from being aborted”.

India’s Prime Minister Manmohan Singh said that “much more needs to be done” to restore investors’ confidence in the eurozone and urged leaders to take difficult decisions “swiftly”.

Japan’s Finance Minister Jun Azumi said “Greece’s abrupt announcement on holding a referendum which was not included in [the earlier agreed deal], has confused people.

Sarkozy insisted on Tuesday that the deal “is the sole possible way to resolve Greece’s debt problems.”

While Papandreou got unanimous backing from his cabinet early Wednesday, several Socialist deputies had already denounced the plan with one quitting the parliamentary party to fight it.

That leaves the Socialists with just 152 deputies in the 300-seat parliament, making the outcome of Friday’s confidence vote on calling the referendum far from certain. — AFP