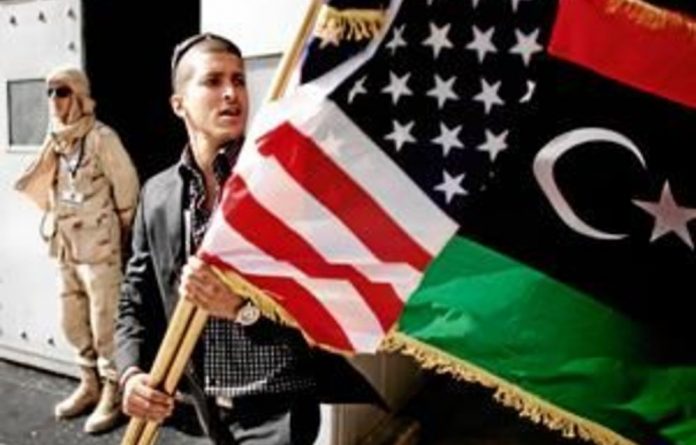 It certainly didn’t take them long. Literally one day after the gory images of Muammar Gaddafi being dragged, kicked and stabbed through the streets of Sirte were broadcast worldwide, the announcement was made. It seems it was what everyone was waiting for. Some newspapers even called it “the starting pistol”.

It all sounds disturbingly familiar. Think of the American companies streaming into Iraq to aid the “reconstruction effort” after the invasion. If there was any doubt, this modus operandi may soon define what seems no more than a new form of neocolonialism in the Middle East. American, Nato (or both) armies will destroy your country under the guise of ushering in democracy, and Western companies will assume the lion’s share of contracts to build it up again.

And with Libya’s National Transitional Council having already announced it would “reward” those countries that were in its corner during the “revolution”, it’s anyone’s guess who will be the biggest of the war profiteers.

Whereas in the past Gaddafi’s Libya was only dealing with China, Russia and Italy, the playing field has now been levelled, in a manner of speaking. Though it has portrayed itself as having had only a “back-room” role in toppling Gaddafi, the United States wants to be the number-one oil buyer from Libya, to compensate for its decades of deprivation of Libyan oil. There can be no doubt that in due course we will see that the US will want a far bigger cut of Libyan oil supplies than it is currently letting on.

It will be said in the future that the end justified the means: the removal of a hated dictator who terrorised his own people for four decades. This may be so, and nobody in their right mind could endorse what the colonel did to Libya. But there are some questions to be asked about the selective morality at play here.

Although Nato’s moral breast-beating extended itself to “protecting the Libyan people” (which ultimately far exceeded its own mandate to targeted assassination and bombing of civilians), no such concern has been shown for the Bahraini people, suffering beneath the yoke of oppression from their al-Khalifa rulers. Both countries are ruled by dictators, yet one remains in power. Both people stood up for their rights and took to the streets. But one was allowed to continue to mow its own people down in the streets (aided by that bastion of democracy next door, Saudi Arabia), and the other was removed.

The reality is that the world’s superpowers did not remove Gaddafi because it was the right thing to do, but because he had outlived his usefulness to them. After all, what threat was Gaddafi’s Libya to the world, really? He’d already given up his nuclear-weapons programme, compensated the victims of the Lockerbie bombing, denounced “terrorism” and, in fact, as records now show, actively co-operated with Western intelligence services in neutralising Al-Qaeda in North Africa, and in Libya in particular.

Here is a clue why it was more convenient for Gaddafi to be lynched by the “revolutionaries” than to stand trial. A few inconvenient truths may have come out at such a trial, as they would have at Saddam Hussein’s trial had it actually happened for longer than five minutes. These are truths that point to Western complicity in the suppression of democracy in the very countries Nato now claims to be defending.

The debacle in Libya, in which nearly every rule of international law was violated, has also proved a welcome distraction. Just as some of the US’s and Europe’s biggest cities were convulsed by protests against their government’s shoddy handling of the economy and the massive Wall Street bailouts, along comes a story made for television.

Far from worrying about their own problems back home, Silvio Berlusconi, David Cameron, Barack Obama and the rest of the New Coalition of the Willing are busy starting wars and propping up bloodthirsty revolutionaries far from their borders.

If anything, the current US administration seems to be learning from its mistakes in some areas. In the case of Libya it wasn’t so overtly involved; it did the real work but held back to let the rebels take the credit for the destabilisation it created.

Libya also needs to be viewed against the backdrop of current events in the Middle East — and the need of countries such as the US to reassert their dominance in a place where their fortunes are flagging.

The US is losing in Afghanistan and Iraq. The Arab Spring has deprived the US of its two old allies, Tunisia and Egypt. And, in Syria, all its attempts to orchestrate the downfall of Bashar al-Assad are being foiled because Iran is a powerful ally of the Syrian government. In Bahrain, a US-backed puppet government is facing a revolt from its own population.

Recently Afghan President Hamid Karzai said that if war broke out between the US and Pakistan, Afghanis would support their brothers. Iraq has openly said as much about using Iraqi soil to attack Iran.

The Western alliance, backed by American military might, is steadily losing influence in the strategic lands of the Middle East. Its friends in high places are slowly fading away. The resurgence of Iran as a player in the Middle East makes things even more precarious. Now it has a new friend — the Libyan “revolutionaries”.

Question is, with friends like these, their ranks packed and stacked with former Al-Qaeda operatives, who needs enemies?