Time to pass baton to new kids in ruck 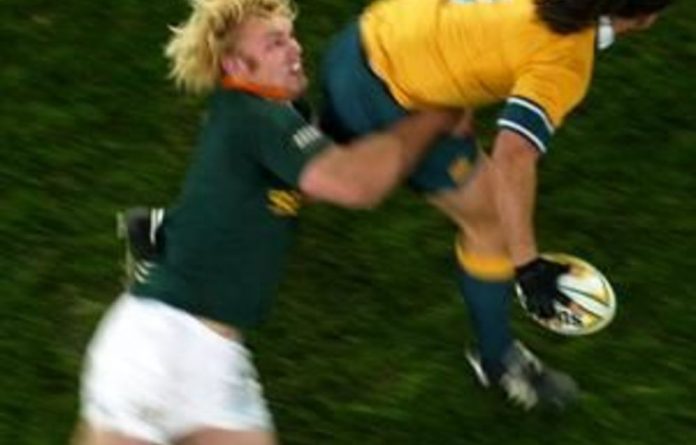 Almost a decade has passed since South Africa won the under-21 World Cup at home. It was on June 28 2002 that the Baby Boks capped a glorious month by beating Australia 24-21 at Ellis Park in Johannesburg. The coach was Jake White and on the field that day were eight players who would join him as World Cup winners in France five years later.

The youngest member of the squad was Burger, a curly-haired giant of a boy who turned 19 a month before the tournament began. Two years younger than most of his teammates, Burger was used by White as an impact player — and never had the designation been more apt. Burger would enter the fray like a battling top, spinning from one ruck to the next, tackling anything that moved and linking with the backs.

Last week Burger was chosen as South Africa’s player of the season, seven years after his annus mirabilis of 2004 when he won the award for the first time and was also elected the International Rugby Board’s player of the year.

With the retirement of Victor Matfield and John Smit, Burger is now on the inside track to the Springbok captaincy, a role he is said to covet. He is not quite the last man standing, but remains the strongest thread linking back to the golden generation of players who emerged under White and fulfilled their rich talent at the 2007 World Cup. The baton has been passed to the new kids on the block, who are exemplified by Patrick Lambie, voted young player of the year last week, and Elton Jantjies, the Lions’ flyhalf.

There is always an abundance of talent in the South African crèche, but will they fulfil their promise in the manner of the golden generation? The final fortnight of the Currie Cup suggested they had a good chance when John Mitchell’s young Lions team won the title by beating Springbok-studded Western Province and Sharks’ teams in the knockout stages.

The final, in particular, was a clinical dismantling of lofty reputations in which the two jewels in Mitchell’s crown, Jantjies and Jaco Taute, enhanced their already glowing reputations. Sharks centre Marius Joubert, on the very field where he scored a famous hat-trick against the All Blacks, was made to look every one of his 32 years, whereas his midfield partner, the 36-year-old Stefan Terblanche, was substituted at half-time.

For Terblanche it was the end of a remarkable Indian summer in his career and he will not be seen on South African fields again, other than in a coaching capacity. It is extraordinary to think that Terblanche’s Test career was already coming to a close when White’s under-21s won at Ellis Park. He has been that good for that long and if Burger is the thread linking to the golden generation, Terblanche is the last remnant of Nick Mallett’s team, which won 17 successive Test matches in the late 1990s.

It is important to highlight this fact because the success of Mallett’s men and White’s youngsters was in sharp contrast to what happened to the Boks in 2002. South Africa lost six of their 11 Tests and the nadir came at Twickenham in the final outing of the year, when they got a 53-3 hammering. The team limped into 2003 under the watchful eye of Rudolf Straeuli and by the time of that year’s World Cup in Australia the coach was reduced to the psychological warfare epitomised by the Kamp Staaldraad boot camp.

The World Cup campaign was doomed from the start and defeat in their pool to England, the eventual champions, was followed by an ignominious exit at the hands of the All Blacks in the quarterfinals. There were no convenient excuses that time in terms of refereeing standards and by the end of the year Straeuli’s brief tenure was over.

Entered White, the new broom that swept a generation of players away and replaced them with his favoured sons. White picked people he knew, including many of his under-21s, as well as the likes of Gerrie Britz, Butch James and Jaco van der Westhuyzen, a trio that had been key members of the 1999 under-21s who won the World Cup in Buenos Aires.

White was assistant coach to Eric Sauls in Argentina and he developed a deep-seated appreciation of and trust in the team’s captain, John Smit. When the time came White made Smit Springbok captain and the rest, as they say, is history.

That was eight years ago and White’s protégés now have silver threads among the gold. It is time to say goodbye and welcome the new generation of Springboks.

Round five and the Super 18 is all at sea

If playing ball was about morality…

Boks must bring backs to the front