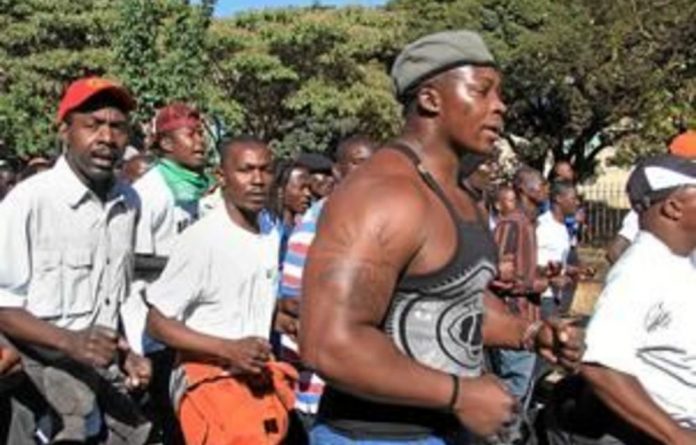 In one of the crowded hostels there is a President Robert Mugabe campaign poster above the entrance to a grim single room shared by three families — separated by plastic sheeting and cardboard.

Outside, youths lean against a crumbling wall daubed with political graffiti and pass around a joint. Inside the dark corridors children splash in a stream of water from a burst pipe.

These residents had a chance of better housing — the Bill & Melinda Gates Foundation planned to build 80 new homes here, refurbish the hostels and sink a borehole.

But, after Chipangano demanded “51%” of the new homes for its members and the right to parcel out the rest as it wished, the project moved on to another township, said Harare’s mayor, Muchadeyi Masunda.

Chipangano, Shona for “the oath” or “the pact”, is behind much of the violence that has hit Harare ­townships in recent weeks. Using fear and extortion Chipangano maintains Zanu-PF control of areas it has repeatedly lost to the Movement for Democratic Change (MDC) in elections. Among the hundreds of youths who live here with no hope of landing a job, its promises of power and money find an army of willing recruits.

After clashes in Harare between rival party youths, Mugabe and Morgan Tsvangirai last Friday jointly addressed a meeting of their parties to call for an end to violence. But the deepening poverty in Harare’s townships makes it hard for youths to resist joining militia groups, who ply them with money and alcohol.

At weekends, the youths are herded to meetings at the hostels, where they are mobilised to take control of the local markets and sniff out the opposition. The group has seized control of council operations in the township — even taking over a local council office — and now determines who gets to set up stalls at the markets, collecting fees from traders and taxis.

At the Mupedzanhamo market, where hundreds of traders sell everything from second-hand clothes to lucky charms, traders need a Zanu-PF membership card and are forced to pay a “protection” fee and a monthly levy to Chipangano.

Fortune through extortion
Outside the market scores of young men line the perimeter wall with their pushcarts, waiting to be hired by the traders to carry goods. They must pay a fee or they are not allowed near the market.

Earlier this month violence erupted when Chipangano set up its own “taxi rank” and ordered operators to pay a “toll fee”. Police were overpowered and an army unit had to be called in to restore calm, according to residents.

At Siya-So, a teeming market that sells car parts and other hardware, a Chipangano offshoot calling itself the Zimbabwe Home Industries and Marketers Association hands out stalls to workmen for a fee.

With thousands of traders making their living in the markets there is a fortune to be made through extortion. The money is channelled to the top politicians said to be in the background and shared among warlords to pay off the militia, with a small portion going to the local council.

Chipangano has been useful to Zanu-PF. When the party holds a rally in Harare the militia shuts down the markets and force-marches the traders to swell the numbers in the crowd. “They make the rules. You complain, you’re victimised as an opposition activist,” said Precious Shumba of the Harare Residents’ Trust community development group, which operates in the township.

“The leaders make decisions about who gets what, where, when, why and how. In their operations these complex lines are maintained and respected, just like in a cult movement.”

That nobody knows who leads Chipangano adds to the group’s mystery. Police appear powerless to stop it, while the Harare council has been overrun.

Chipangano emerged in 2001, a year after the MDC swept up urban seats in the general election. It has been used as a weapon to cow the party’s urban support, while disrupting the party’s council programmes.

Zanu-PF denies it has any control over the group. Spokesperson Rugare Gumbo claims the party is as eager as anyone to find out who is behind the movement.