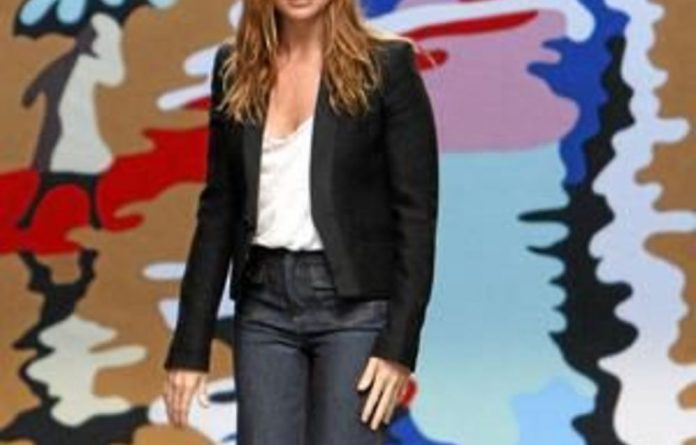 The party Stella McCartney throws every December at her Bruton Street store in central London to celebrate the switching on of her kitsch-chic Christmas windows has become a fashion insider’s highlight of the party season.

It is fabulous, but fun too: there are pints of Guinness as well as flutes of champagne, chocolate Santas alongside smoked salmon canapes.

Next week’s party is likely to be the best yet, as McCartney certainly has plenty to celebrate right now. On Tuesday morning, as I was reading yet another fashion blog entry marvelling about how McCartney’s winter 2011 collection is owning the red carpet — Kate Winslet took the trompe l’oeil hourglass Octavia dress for a red-carpet encore this week, wearing a lipstick-red version of the white dress she wowed the Venice film festival with for the Paris premiere of her film Carnage — my inbox bleeped with an announcement that Stella McCartney will stage a show (her first in London for 16 years) as part of London fashion week in February, in celebration of London’s Olympics. In London, there will also be a “World of Stella” pop-up at Selfridges department store in January, followed by the opening of a new flagship store, to include the first standalone Stella Kids store.

The announcement was short on details, but the intent is clear: Sarah Burton may have dominated London fashion since April, but McCartney intends to make 2012 her year. As creative director for Adidas Team GB — not to mention fairy godmother of the chic sportswear trend, having pioneered the parka as catwalk staple years before it caught on — McCartney is in pole position to capitalise on London’s Olympic status.

Red-carpet moments
What makes the McCartney masterplan extra smart is that the show will be eveningwear, not sportswear. Because after years of being the go-to label for tailored trousers and blazers, McCartney’s current collection has catapulted her into becoming one of Britain’s only real contenders in the red-carpet fashion wars.

There are, I would say, two contenders for 2011’s dress of the year: the Winslet-favoured Octavia, with its cartoon-hourglass shape, and the sheer Lucia with the bold black polka dots, as seen on everyone from Susan Sarandon and Liv Tyler to Tess Daly. Both are by McCartney.

To make the most of the red-carpet moment McCartney is currently having, the London event — which will be a “presentation” rather than a runway show, so as not to devalue the main show taking place in Paris a fortnight later — will showcase eveningwear only.

And that’s not all. The moment when the Stella McCartney brand really came to life was not on a catwalk, but with the first collection for Gap Kids, two years ago. By then, McCartney was already a highly covetable and respected fashion designer, but at that moment she moved beyond that, becoming an aspirational lifestyle brand. With husband Alasdhair Willis, she has four children: Miller (six), Bailey (five), Beckett (three) and Reiley (first birthday this week).

The set-up is highly glamorous (the Beatles dad, the celebrity mates, the country house lavishly photographed by American Vogue) but with a crucial balancing dash of reality (McCartney and her husband are unusual in their celebrity circles for not having the usual army of behind-the-scenes childcare, and McCartney, though always chic, is not of the perma-blowdry school of grooming). The brand, not missing a trick, is utilising the spotlight that will undoubtedly fall on the London fashion week moment to highlight the new kids’ shop.

Ten years ago, when McCartney’s first own-name catwalk show in Paris was a resounding flop, it was fashionable to dismiss her as no more than a daughter-of. The headlines were brutal — “car crash” was one description.

McCartney, guarded by nature, was for a long time afterwards highly wary of the press, even after the reviews turned sweet. Recently, however, she has seemed more relaxed backstage after her shows. They say that living well is the best revenge, and it looks as if McCartney has well and truly got her own back. —