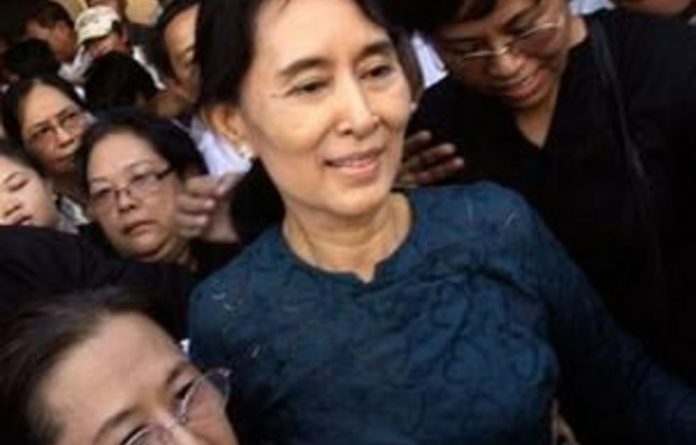 Democracy icon Aung San Suu Kyi’s opposition began its formal return to mainstream Burmese politics on Friday as it applied to re-register as a political party, paving the way for her to run in elections.

The National League for Democracy (NLD) announced a week ago it would seek to sign up as a party again — after boycotting last year’s parliamentary poll — amid signs of reform in a country long-dominated by the military.

Party officials have indicated that the 66-year-old Suu Kyi herself is likely to stand in upcoming by-elections, where 48 seats will be up for grabs, though she has yet to confirm this and no date has been set for a vote.

The NLD filed papers at the national electoral commission in the capital Naypyidaw on Friday morning.

The commission is expected to take at least a week to approve the application after which the NLD will need to return with two of its leaders to complete the process.

Strict control
“We are very glad because this is the first step to re-registration. For the next step, Daw Aung San Suu Kyi needs to come to the electoral commission office herself,” NLD spokesperson Nyan Win, who led the delegation, said. Daw is a term of respect.

The NLD gave the electoral commission the names of 21 party founders, including Suu Kyi.

Friday’s application was a low-key affair with only six NLD representatives in attendance. Access to the remote capital is strictly controlled and no party supporters were present.

No decision has yet been made on a new NLD symbol after the party abandoned its traditional bamboo hat logo.

After decades of outright military rule, a much-criticised election in November last year — Burma’s first in 20 years — brought a nominally civilian government to power, albeit one dominated by the army and its proxies.

Reformist moves
The new administration has surprised many observers with a series of reformist moves, including holding talks with Suu Kyi, passing a law giving workers the right to strike and releasing hundreds of political prisoners.

The NLD boycotted last year’s election mainly because of rules that would have forced it to expel imprisoned members. Suu Kyi was under house arrest at the time.

The party’s decision last Friday to end its boycott came on the same day the military-dominated government received a dramatic seal of approval from the US for its nascent reforms.

After speaking directly to Nobel laureate Suu Kyi for the first time, President Barack Obama said Hillary Clinton would visit Burma next week — the first US secretary of state to do so in 50 years.

Obama said Clinton’s trip was designed to stoke “flickers” of democratic reform in a country that for decades has been blighted by military rule and international isolation.

House arrest
In another diplomatic coup last week, Burma also won approval from the Association of Southeast Asian Nations to chair the 10-nation bloc in 2014.

The NLD won a landslide victory in polls in 1990 but the then-ruling junta never allowed the party to take power. Suu Kyi, although a figurehead for the campaign, was under house arrest at the time.

Burma President Thein Sein — a former general — told a small group of Burma journalists in Indonesia on Saturday that he was happy about the NLD’s plans to re-enter mainstream politics and would welcome Suu Kyi to parliament.

Analysts say the return of the NLD will add to the legitimacy of the army-backed government, which is seeking to end its global isolation — but would also increase the relevance of the popular but long-excluded Suu Kyi.

After spending 15 of the past 22 years in detention, Suu Kyi told her party last week that they should contest all the seats available in the by-elections. — AFP