COP17: Discontent with US grows at climate talks 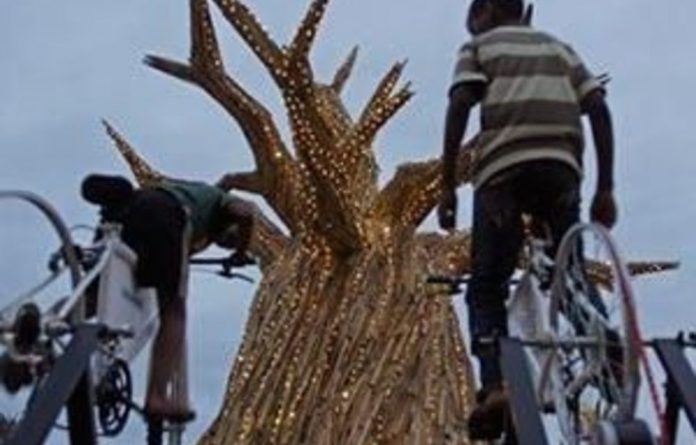 Leading American environmentalists complained to Secretary of State Hillary Rodham Clinton on Wednesday that her negotiators at the UN climate talks risked portraying the US as an obstacle to fighting global warming because of its perceived foot-dragging on key issues.

Separately, European delegates and the head of the African bloc at the 192-party talks also denounced US positions at the talks which are seeking ways to curb the ever-expanding emissions of heat-trapping greenhouse gases.

"Developed countries as a whole are not taking climate change seriously as a global issue," Seyni Nafo, of Mali, said.

"Look at the UN. We use and we welcome their leadership on democracy, on access to markets, on human rights issues. We would want to have the same leadership to tackle climate change because for us in the developing world the biggest threat, the biggest enemy, is climate change."

Discontent directed at Washington came as the UN's top climate scientist, Rajendra Pachauri, warned the conference's 15 000 participants that global warming is leading to human dangers and soaring financial costs but that containing carbon emissions will have a host of benefits.

Although he gave no explicit deadlines, the head of the Intergovernmental Panel on Climate Change implied that the world only has a few years before the earth is irreversibly damaged by accumulations of carbon in the atmosphere.

'Running out of time'
The letter to Clinton, signed by the chief executives of 16 major non-profit groups, also stressed the urgency of finding solutions to the world's emissions of carbon dioxide, mainly from burning fossil fuels for energy, industry and transportation.

"This is a critical meeting and we are rapidly running out of time to avert the worst impacts of climate change," it said.

It reminded Clinton of President Barack Obama's presidential campaign pledges to move the US back into the forefront of global cooperation on global warming.

"Three years later, America risks being viewed not as a global leader on climate change but as a major obstacle to progress," said the letter.

It was signed by the heads of the Environmental Defence Fund, the Sierra Club, the Natural Resources Defence Council and other major environmental lobby and activist groups.

Voluntary pledges
Anger was directed at the US conditions for negotiating a deal that would legally bind all countries to limit their emissions and for holding up discussion on how to raise $100-billion earmarked for poor countries to develop low carbon economies and deal with the effects of global warming.

Instead of a binding agreement, the US has said it favours voluntary pledges by countries to do as much as they can to control emissions.

At the last climate conference a year ago in Cancun, Mexico, some 80 countries listed the actions they were taking to reduce emissions or at least lower their rate of growth.

Jonathan Pershing, the US delegate, told reporters this week he did not believe those pledges would change in the near future. The US has promised to cut its emissions by 17% from 2005 levels by 2020.

Taken together, those voluntary pledges amount to about half of what scientists say is needed to avert potential climate disaster, said the European Union's chief negotiator, Artur Runge-Metzger.

Unpopular issue
"Those who seem to think that it is enough for current pledges to stay as they are up to 2020 seem to be overlooking those facts," he said.

"The longer you wait, delaying action, the more expensive and disruptive it will be and the greater the risk" of missing the target set by Pachauri's IPCC after compiling years of studies and projections.

Runge-Metzger acknowledged the US delegation may be hamstrung by US the domestic political scene where climate change is perceived as an unpopular issue.

"The US could set a good example but we all know the situation of the US at home. It's very hard for the Obama administration to move forward with climate change because of the situation in congress."

In his briefing to the convention, Pachauri outlined the dangers science anticipates unless carbon emissions are curbed.

Financial burdens
Heat waves currently experienced once every 20 years will happen every other year by the end of this century, he said.

Coastal areas and islands are threatened with inundation by global warming, rain-reliant agriculture in Africa will shrink by half and many species will disappear. Within a decade, up to 250-million more people will face the stress of scarce water.

Increasingly frequent weather disasters have imposed heavy financial burdens with some poor countries running up 90% of their national debt to deal with the aftermath of storms, droughts and floods, he said.

But the Indian scientist said "many impacts can be avoided, reduced or delayed" by reducing emissions.

To stabilise carbon concentrations in the atmosphere would slow economic growth by 0.12% per year, he said, but those costs would be offset by improved health, greater energy security and more secure food supplies. — Sapa-AP