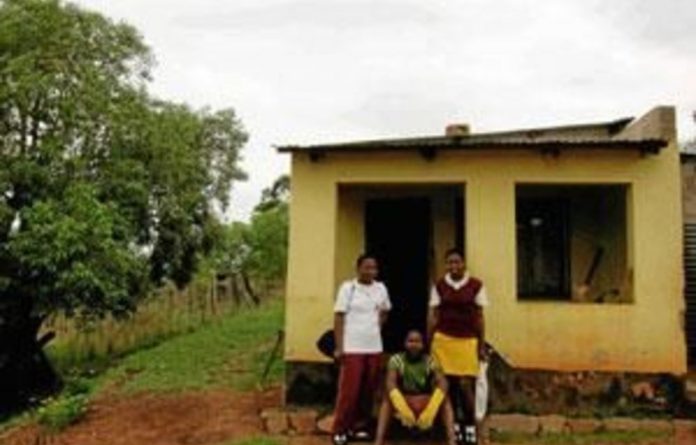 Orphaned by HIV/Aids-related illnesses at the ages of six and seven, Tandeka and Njabulo have looked after each other for 10 years.

Morning
At 5am Tandeka (16) wakes up. Her brother Njabulo (17) and a friend (16) are still asleep. She breaks wood, makes a fire and fetches water. They have lived alone, growing up together and supporting each other for a decade. Breakfast is quiet. Njabulo comes from the shower smelling of soap. Shirtless and clean-shaven, he slowly eats a bowl of steaming pap.

There is only one spoon, which goes to their friend. They put on their bright yellow and purple uniforms, polished shoes and belts and begin the 10km walk to school. These well-groomed, strapping children speak English and are not what I imagined when I packed a tent to live for a weekend with teenage orphans living without the ­support of adults.

Swaziland has one of the highest rates of Aids and tuberculosis in the world and the area where Tandeka and Njabulo live has the highest rates in Swaziland — almost every nearby home is run by children. There are 125?000 orphans in Swaziland, the United Nations Children’s Fund estimates, a staggering number in the tiny mountain kingdom of 1.2-million people.

After their parents died, Tandeka and Njabulo, aged six and seven, inherited their concrete home and a little land around it. Their neighbour is a distant cousin but otherwise they have no other family. They baulk at the notion of leaving their home and aren’t sure what I mean when I ask if they considered moving to an orphanage.

“This is our home,” says the soft-spoken Tandeka. “Even if we are orphans. “When we were children and our parents died, we learned very quickly,” she says, her eyes following a lizard across the floor. She wears worn plastic flip-flops and her hair is closely shaven.

“We take care of each other, share the chores.” Most of the objects in their lives — a bowl, towel and mirror — belonged to their parents. They have a tape of old Christian lectures, which they often listen to and quote from. “This bed was my parents’,” Tandeka says, bouncing lightly on the edge. “We want it to last long by making sure we don’t jump, only coming here to sleep.”

She has neatly made it up with a faded floral blanket and thin brown pillows. The only thing that might suggest it is a child-headed household is “Welcome” scrawled on the wall. “I made that,” says Njabulo, his muscular arms crossed as he leans back in his chair. “So everyone knows they are welcome here. Because every­one is. That is important. We are Christians, you see.”

They are so well mannered and warm, so physically fit, it is easy to miss their poverty. But their house is decaying and a large crack is creeping down the wall. Their only food is a bag of pap, which is running low. And they have no electricity.

“To study we use the candle, but we don’t have money for the candle now,” Tandeka says. “So we can start a fire or use the light from the cellphones, but,” she pauses, embarrassed, “it’s run out of battery.” International support organisations drop off food and missionaries set up homes, but every year there are more HIV/Aids orphans. Billions of aid dollars later, HIV in Swaziland is more prevalent than ever.

Tandeka’s teacher estimates that 70% of her pupils are orphaned. There is no formal HIV education. “I can talk to them because, you know, I am an orphan too,” she says. Hunger and poverty in rural Swaziland mean a universal fight for survival. But life goes on.

Tandeka and Njabulo have grown up healthy and happy. They have land and a home. Tandeka hopes to be a teacher, Njabulo a lawyer. “We ask for help sometimes from people, but we are tired of asking and people get tired of being asked. So sometimes we decide to stay without. And we make it.”

The sun is hot, scorching the dry red earth, and Tandeka takes a deep breath. “If you are always worried, you can’t cope,” she says, tears welling up in her eyes. “I miss my parents. But they taught us to be strong. For me to make it, I have to be strong, whatever the situation that I face.”

Classes end early on Fridays and they walk 15km to a neighbourhood care point for lunch — pap. Tandeka and Njabulo lean against the walls of the building with their teenage friends, while tiny children, their bones showing, crowd around an enormous iron pot of pap.

Most local families have abandoned subsistence farming to qualify for World Food Programme handouts, an easier and more reliable option than farming. It is said that if one family grows food it threatens the entire area’s eligibility for handouts. There are tales of neighbours setting fire to crops at night.

The situation
Being an orphan in Swaziland is difficult for many reasons. Adoption is problematic and Swaziland has essentially stopped international adoption. Corruption is endemic. The newspapers frequently run exposés of school principals enrolling orphans who don’t exist.

Recently, an employee at the King’s Office used official stamps to pretend his own children were orphans and eligible for free education, according to the Swazi Observer. Getting aid to orphans is difficult and open to corruption. A nearby village leader, who receives government funding for more than 10 orphans, is fat and wears a gold watch.

The principal of Tandeka and Njabulo’s school drives a new Mercedes and pupils complain that teachers eat state-subsidised food meant for the pupils. It continues to the top. Swaziland’s absolute monarch, one of the richest men in the world, spends much of the government’s money on lavish new projects, civil servants and ­private estates. This pervasive corruption both within non-governmental organisations and the country’s monarchy looms over every effort to help.

A tiny note in the Times of Swaziland mentions that an orphan welfare centre, which has already ostensibly raised and spent R7-million, will be shut because of a lack of funds. Few Swazis admit the extent of the orphan problem.

The popular theory is that Swaziland has few true orphans — the Swazi people are so tightly knit that children without parents are absorbed into the extended family structure. But the sheer number of orphans challenges this — and 12% of the population cannot be put into orphanages.

The only government effort aimed directly at orphans comes from a tiny organisation called Young Heroes. The organisation gives people caring for orphans €180 a month for each child.

The children know how much is allotted to them and ostensibly hold their caretakers accountable. This allows orphans to continue living in the family home, which they might inherit.Young Heroes has a staff of six and gets funding (which has been cut) to only 860 children. Tandeka and Njabulo are not among the lucky few.

Night
After school Tandeka walks back home and then goes down the hill to a pipe trickling groundwater. “It is not usually safe to come here alone,” she says. “[Not] without Njabulo.” At home she sweeps, grinds mealies, picks wild greens and starts another fire to cook pap. She must hurry to finish it before it gets dark.

To help support this family or children like Tandeka and Njabulo, visit: youngheroes.org.sz

If not now, later: Women’s vulnerability to HIV risk

HIV treatment: Where are the men?