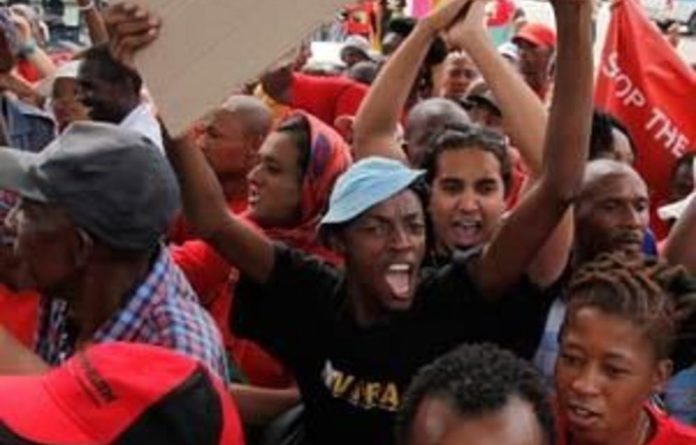 Civil society activists who gathered for an engagement with President Jacob Zuma at the Durban City Hall at midday on Thursday allege that they were “pushed, punched and intimidated” by supporters of the president.

Tristen Taylor of Earthlife Africa said: “I was standing on the balcony above and saw everything. Some comrades had silently stood up with placards saying ‘Zuma to stand by Africa’ when they were attacked by the president’s supporters.

“They were surrounded by about thirty or forty people and it was a free-for-all, people were being punched and pushed quite violently and the president just sat there, doing nothing,” added Taylor.

Taylor said some attackers were dressed in plain clothes, while others were wearing the green tracksuits worn by the city’s COP17 volunteers — reminiscent of incidents that occurred at Saturday’s civil society march where green-suited “volunteers” threw water-bottles and engaged in skirmishes with members of the Democratic Left Front (DLF).

Siziwe Khanyile of groundwork, who was also escorted from the hall, said: “This was our event, organised to communicate with President Zuma. We were then abused, kicked out, robbed, and manhandled by Zuma supporters disguised as COP17 volunteers.”

The presidency released a statement on Thurday afternoon acknowledging “there was an unfortunate scuffle at the beginning of the meeting as some groups competed to be heard in a disruptive manner. The president stressed that since South Africa is a democracy, people must respect each other’s views and space and raise disagreements respectfully,” read the statement.

It quoted Zuma as saying: “In South Africa we believe in discussing any issue that comes before us. We dedicate time and effort to discussing it until we find a solution. Let us learn to disagree respectfully with one another.”

The statement continued: “The presidency acknowledges the intervention of the police, who did their jobs to restore order in the Durban City Hall.
The meeting continued successfully and constructively with civil society afterwards.

“On the eve of the ending of the talks, President Zuma also emphasised the need for parties to go above the national interests and to put the interests of humanity first in dealing with matters on the table at the COP17/CMP7 talks.”

Greenpeace Africa’s communications director, Fiona Musana, said Greenpeace staff was holding up signs outside the hall “and within 30 seconds people dressed in green COP uniforms circled around them and mobbed them and started hitting them”.

Musana said the president remained quiet during the time but during his speech he acknowledged that the violence was uncalled for.

“We should be focusing on the impacts that Africans are facing around the continent, and they are urging President Zuma as the host of COP17 to push parties towards a meaningful outcome tomorrow.

“We are considering our legal options and will make a decision on whether further action will be taken after consulting legal advisers,” she said. — Additional reporting by Lauren Clifford Holmes

Screen grab: The devil is in the retail