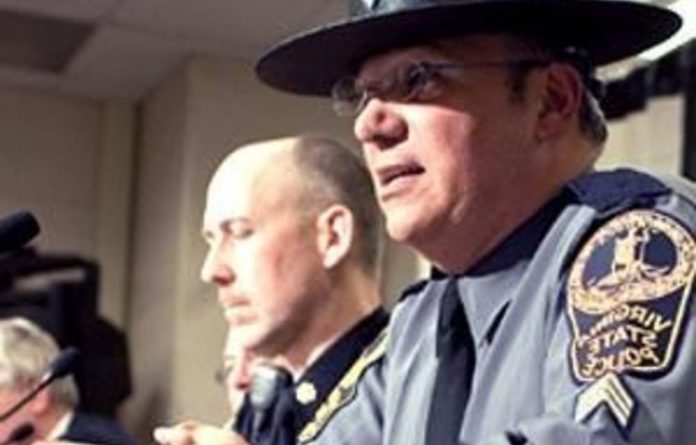 A gunman ambushed and killed a campus police officer and was later reported to have been found dead on Thursday at Virginia Tech University, the site of one of the worst shooting rampages in United States history.

Authorities declared the campus safe and lifted a lock-down after a nearly four-hour manhunt, seeming to lend credence to television news reports that a body found in a Virginia Tech parking lot was that of the shooter.

Police at a televised news conference declined to say whether they suspected a murder-suicide and offered no motive for the crime, citing an ongoing investigation.

The place where the officer was shot is in a parking lot in the shadows of the Virginia Tech football stadium. Small groups of students stood nearby as police removed yellow tape from around the crime scene on Thursday evening.

‘Shots fired’
Second-year student Fuller Hoepner (19) said he stayed inside his apartment after he saw the school’s emergency message this afternoon: “Shots fired.”

“We did not move. We watched the news all day,” he said.

The incident evoked grim memories of April 2007 when Seung-Hui Cho (23) killed 32 people and wounded 25 before committing suicide on the school’s rural campus in the Shenandoah Valley about 400km southwest of Washington. It was the deadliest attack by a single gunman in US history.

A few dozen students gathered on Thursday evening at a memorial for that attack, talking quietly among themselves. At a stone memorialising one of the victims, a student left a note on orange paper. It read: “We are the Hokies,” the name of the school’s sports teams. “We will prevail.”

In Thursday’s incident, the gunman walked up and shot to death a four-year veteran of the campus police force during a routine traffic stop, police said.

The man then fled on foot toward a nearby parking lot, and a body was later found there along with a gun, police said.

But Sergeant Bob Carpentieri of the Virginia State Police would not confirm the second body was that of the unidentified gunman.

He said, however, that investigators were looking at the possibility the shooter was linked to an armed robbery earlier in the day in the nearby town of Radford, Virginia.

Police, some in combat gear with assault rifles, swarmed the campus after the shooting, while students and faculty were ordered to hunker down inside university buildings and dormitories.

‘Active threat’ ends
Hours later, the university declared an end to an “active threat” on campus and told people to “resume normal activities”.

During the lockdown, parents of students sought frantically to locate their children through cell phones and social networking sites.

“Right now it’s kind of scary and hectic around here that this is happening again,” Matthew Spencer, a first-year Virginia Tech student, told a local NBC station before the all-clear was given.

US House of Representatives Republican Leader Eric Cantor of Virginia was among the first members of Congress to weigh in. “Such violence is never easy to explain, and cuts to our core — especially on a campus that has experienced such grief in the past,” he said.

Virginia Governor Bob McDonnell said: “I am deeply saddened by today’s news of another tragedy affecting the Virginia Tech community. Our thoughts and prayers are with the families of those affected by these shootings.”

Alert system in place after 2007 shooting
The school, formally known as Virginia Polytechnic Institute and State University, was criticised for its slow response to the 2007 incident and has since put a campus-wide alert system in place.

Third-year student Allison Pisieczko, who was taking an exam on campus when the alert went out, said the school did a good job of notifying students and keeping them safe.

“There were police everywhere,” Pisieczko said. “They were sending messages all day long.”

Autumn semester final exams that were scheduled for Friday were postponed.

Student Elizabeth Sullivan said about 200 students were sent to the second floor of the Squires Student Centre from the ground floor about an hour after the shooting.

Shortly afterward, a swat team arrived to pat down each student and check every bag in the building.

“I was pretty nervous at first. I didn’t really know what was going on,” Sullivan told a local NBC television station.

Families reassured through social networking
She said most students had been keeping in touch with their families through Facebook and Twitter.

The 2007 Virginia Tech massacre renewed a chorus of calls for tougher gun control laws, particularly in the US Congress.

Those calls did not get far since Republican lawmakers have traditionally opposed gun control and Democrats, having been burned on the issue politically, did not push it.

Since taking office in January 2009, President Barack Obama has shied away from stiffer gun laws despite demands for it by members of his largely liberal base. — Reuters