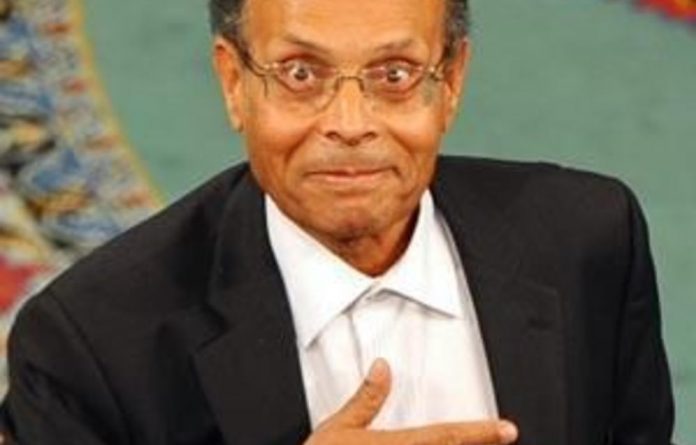 Tunisia’s opposition veteran Moncef Marzouki on Tuesday was sworn in as the country’s first elected president since the north African nation’s revolution sparked the Arab Spring.

“I will be the guarantor of the national interests, the state of laws and institutions,” Marzouki said with his hand on the Qur’an as he took his oath before the constituent assembly that elected him president on Monday.

“I will be faithful to the martyrs and to the objectives of the revolution,” he said, almost a year after the start of the mass protests that ousted strongman Zine el Abidine Ben Ali and sparked popular revolts that also toppled dictators in Egypt and Libya.

“Other nations are watching us as a laboratory of democracy,” he said, clad in a traditional camel-coloured tunic on top of a white shirt and blue jacket. “The main challenge is to attain the revolution’s goals.”

Visibly moved with tears in his eyes the 66-year-old who a year ago was living in exile solemnly promised to be the “president of all Tunisians”.

‘Open to the world’
“Our mission is to promote our Arab-Muslim identity and be open to the world. To protect the veiled [women] and girls in niqab as well as those who aren’t veiled,” he said, adding that he would safeguard health, education and women’s rights.

Calling for national reconciliation, he also challenged the opposition “to participate in the nation’s political life and not confine itself to a role of observer”.

Tunisia’s constituent assembly on Monday elected Marzouki president a month and a half after legislative elections.

“I have the great honour of becoming the first president of the first free republic of the Arab world,” the French-trained doctor said after the vote and before going to take up residence in Ben Ali’s old seaside presidential palace beside the Roman ruins at Carthage.

Marzouki was elected with 153 votes in the 217-member constituent assembly, with three of the 202 deputies present voting against, two abstaining and 44 opposition members casting blank ballots.

The north African country’s new president was Ben Ali’s bete noire throughout his political career and was forced to live in exile in France for a decade.

Ennahda leader tipped for prime minister
Marzouki’s first order of business will be to name a prime minister, with Hamadi Jebali, the number two of the moderate Islamist Ennahda party, expected to get the nod.

Critics accuse Marzouki of being a pawn of Ennahda, which came in first in the October 23 constituent assembly elections with 89 seats.

Marzouki’s Congress for the Republic Party — whose symbol is a pair of red glasses inspired by his outsize spectacles — was second, winning 29 seats.

Marzouki, who headed the Tunisian League for the Defence of Human Rights (LTDH) from 1989 until Ben Ali supporters forced him out in 1994, has a deep-seated passion for human rights.

An admirer of India’s independence hero Mahatma Gandhi, he travelled to that country as well as South Africa after its transition from apartheid to democracy.

Marzouki, a father of three, is divorced from his French wife. A prolific writer, he has penned several books in French and Arabic including one titled Dictators on Watch: A Democratic Path for the Arab World.