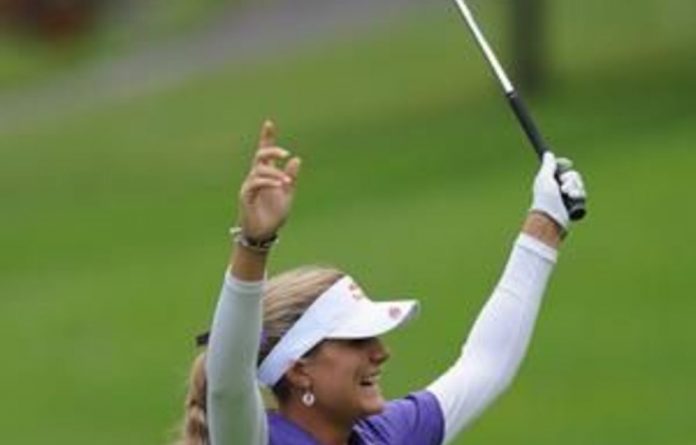 American teenager Lexi Thompson pulled away from Lee-Anne Pace of South Africa to win the Dubai Ladies’ Masters by four strokes and become the youngest professional winner on the Ladies’ European Tour on Saturday.

The 16-year-old Thompson chipped in for a birdie on No. 9 to take a one-shot lead over Pace and then extended her advantage with four birdies on the back nine to finish on 15-under 273 for the tournament. Pace (69) started strong with two birdies and an eagle on her first six holes but shaky putting on the back nine ended her chances.

“It feels amazing”, Thompson said after her second professional victory. “I’m just honoured they invited me back and I’m … grateful to be here. I’ve been working on my game really hard and it has paid off. I’m just going to continue working hard and … to improve [in] every tournament”.

Pace, the 2010 European Tour money winner, said she started to lose focus on the back nine and felt the victory eluded her when her approach shot on No. 12 went over the green resulting in her second bogey in five holes.

“I am pretty happy. At the end of the day, I played pretty well and kept my composure”, she said. “Things could have been a little different. I hit a bad club on 12, which cost me a shot, and that is where things changed around”,

‘Pretty frustrating’
Sophie Gustafson of Sweden (71) was a shot behind Pace in third place, followed by four players a further shot back.

American Michelle Wie (72) came into the final round five shots off the pace and fell out of contention with two bogeys and a double-bogey on the front nine. She finished tied for 12th.

“It was pretty frustrating. I couldn’t get my putts going,” Wie said. “I just needed to play better on the front nine all week. Nothing really went. Nothing went in. At least, I finished birdie birdie. I gotta work on a lot of things for next season.” — Sapa-AP