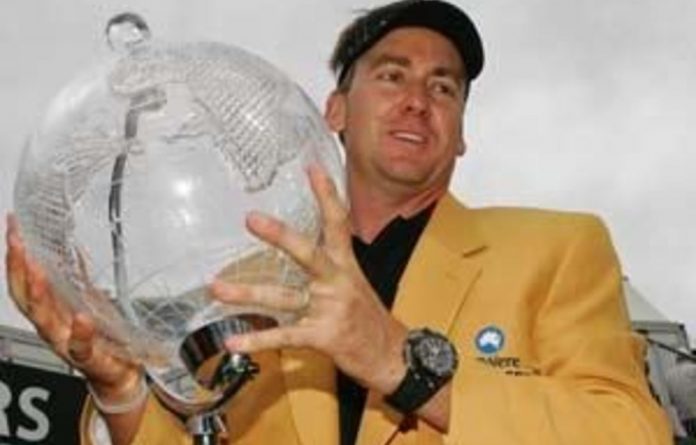 Poulter, two strokes behind Ogilvy entering the round, closed with a 4-under 67 in windy conditions to finish at 15-under 269 at Victoria Golf Club.

Australian Marcus Fraser had a 64 to finish second, three strokes back. Ogilvy, the 2006 US Open champion who matched the course record with a 63 on Saturday, shot a 73 to end up third at 11 under.

Poulter quickly erased Ogilvy’s overnight lead with a 15-foot eagle putt on the par-4 first hole. He then hit a birdie on the seventh to take the outright lead and added another on the ninth to make the turn with a two-shot advantage.

“To come down here the week before Christmas and to win this tournament is very special”, he said. “I had a message from (former champion) Justin Rose who said, ‘Put a nice gold jacket in your wardrobe like I have,’ and it’s nice to do that.”

World No. 1 Luke Donald had four birdies on the front nine to move up to fifth place, but followed with four bogeys on the back nine to finish with a 1-over 72 and a share of 12th.

Windy conditions
Greg Chalmers failed in his bid to become the second player to complete the Australian Triple Crown, shooting a 74 to join Donald in the group at 4 under. Robert Allenby remains the only player to sweep the Australian Open, PGA and Masters. He accomplished the feat in 2005.

Poulter putted well in the final round, despite the windy conditions.

After nailing the 15-footer for eagle on the first, he sank a long putt to save par on the fifth and putted across the green for birdie on the seventh. He nearly made another eagle on the ninth, with the ball stopping inches from the hole.

“After the first couple of days when there wasn’t much wind people may have thought the Victoria Golf Club was easy, but they were mistaken,” Poulter said. “It certainly showed its teeth today.”

Ogilvy showed signs of life on the back nine, sinking a long putt for birdie on the 16th, but Poulter matched his birdie to maintain his three-shot lead. A bogey on the 17th was the only blemish on Poulter’s final-round scorecard.

Fraser had eight birdies and a bogey to surge past Ogilvy for second. Ogilvy, who grew up playing on the Victoria Golf Club, had two birdies, two bogeys and a double bogey in his final round.