How the internet ignited a global inferno 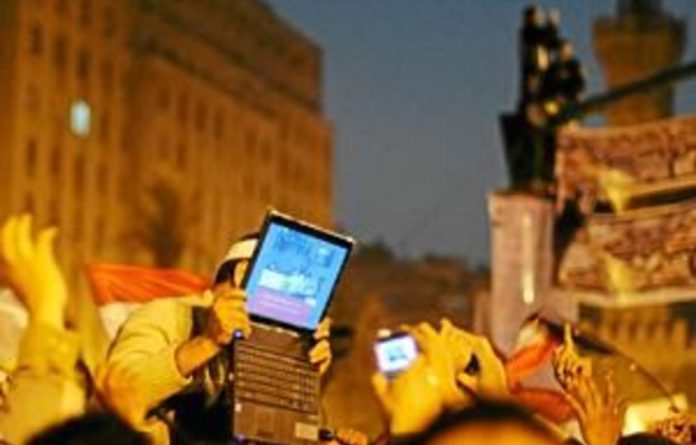 It was easy to overlook the first report of trouble brewing in Tunisia. According to a Reuters article dated December 19 2010, “hundreds of youths” were “angered by an incident in which a young man, Mohamed Bouazizi, had set fire to himself in protest after police confiscated the fruit and vegetables he was selling from a street stall”. The report also noted that “riots are extremely rare for Tunisia, a North African country of about 10-million people that is one of the most prosperous and stable in the region”.

The only evidence in the article of the shit storm that was about to be unleashed on the region comes near the bottom of the news pyramid.

“Footage posted on the Facebook social-network site showed several hundred protesters outside the regional government headquarters, with lines of police blocking them from getting closer to the building. It did not show any violence.”

It’s a little tidbit of information that, looked at through the crystal ball of hindsight, turned out to be prophetic.

Rather than being contained in Sidi Bouzid — a city 200 kilometres from Tunis that was last in the headlines for a battle between Allied and German forces in World War II — the pictures on Facebook made this incident a national, regional and global issue. The violence in the town escalated and spread, and the clashes were filmed and tweeted on smartphones and quickly disseminated on social-networking sites.

Another contributing technological factor was WikiLeaks, once a moderate, responsible whistle-blower site that had spiralled slowly out of control during the preceding three months as its founder, Julian Assange, started to believe a little too much of his own press.

A tech hero, the Australian is both loved and reviled, often by the same people at the same time. He started hacking when he was 16 and, in 1991, was charged with more than 30 offences. Driven by a sharp intellect, a rough childhood and an overly polarised sense of right and wrong, Assange founded WikiLeaks in 2006. The first documents leaked included information on Daniel arap Moi’s family corruption, Guantanamo Bay detention protocols and the “bibles” of Scientology.

WikiLeaks quickly grew in prominence, and deservedly so. The documents it got were often vital for democracy and individual freedoms, but also extremely sensitive. It generally handled these with care, removing names of foreign informants and working with news publications to bring serious corruption, toxic dumping, assassination orders and other wrong-doings to light.

This impressive haul came on top of 400 000 American documents relating to the Iraqi war and 92 000 on the country’s Afghanistan campaign. In a classic case of a victim of its own success, the Iraqi documents started to tear the WikiLeaks team apart. Dissension arose over the speed with which Assange released the documents, too soon for them to be properly cleansed of all information that could threaten lives (or be “redacted”, as WikiLeaks likes to call the process).

WikiLeaks vs OpenLeaks
In an altercation that defined the period, strong words were traded between WikiLeaks’s German spokesperson, Daniel Domscheit-Berg, and Assange, on the group’s secure chat site towards the end of September, as reported by Wired magazine:
“Domscheit-Berg: i want to know what the agreements are in respect to iraq
“Assange: That is a procedural issue. Don’t play games with me.
“Domscheit-Berg: stop shooting at messengers
“Assange: I’ve had it.
“Domscheit-Berg: likewise, and that doesnt go just for me
“Assange: If you do not answer the question, you will be removed.
“Domscheit-Berg: you are not anyones king or god / and you’re not even fulfilling your role as a leader right now / a leader communicates and cultivates trust in himself / you are doing the exact opposite / you behave like some kind of emperor or slave trader
“Assange: You are suspended for one month, effective immediately.”

The suspension proved permanent, with Domscheit-Berg breaking away to start competitor OpenLeaks. The Independent reported that, in total, “at least a dozen key supporters of the website are known to have left”. Assange, never good with criticism, appeared to react by getting increasingly paranoid and, considering the material he was holding, the paranoia was probably not entirely unfounded.

When WikiLeaks did start leaking American cables, the fallout was immense. It was even felt in South Africa, with ANC Youth League leader Julius Malema proving to be a source of information on the internal politics of the ANC.

The revelations were far more serious for Tunisia. In a 2008 cable with the pithy title “Corruption in Tunisia: What’s Yours is Mine”, by American ambassador Robert Godec, President Zine al-Abidine Ben Ali’s extended family was compared to the Mafia.

“Often referred to as a quasi-mafia, an oblique mention of ‘the Family’ is enough to indicate which family you mean. Seemingly half of the Tunisian business community can claim a Ben Ali connection through marriage, and many of these relations are reported to have made the most of their lineage.”

The timing of the release of the documents in early December was perfect for the Tunisian revolution. It became a powder keg when added to pictures of Bouazizi setting himself alight doing the rounds on social networks and a purported suicide note to his mother on Facebook.

“I will be travelling, my mother, forgive me. Reproach is not helpful. I am lost in my way, it is not in my hand, forgive me if I disobeyed words of my mother. Blame our times and do not blame me, I am going and not coming back. Look, I did not cry and tears did not fall from my eyes. Reproach is not helpful in times of treachery in the land of the people. I am travelling and I am asking who leads the travel to forget.”

By January 14 this year, less than a month after that first Reuters report, Ben Ali had fled to Saudi Arabia and protests were starting in Egypt and Algeria. By the end of the month the unrest had spread to Libya, Yemen, Lebanon and Jordan.

Two days after Ben Ali fled, a causal link was identified between the uprising in Tunisia and WikiLeaks, by Libyan leader Muammar Gaddafi, of all people. He blamed his old dictator-friend’s woes on “WikiLeaks, which publishes information written by lying ambassadors in order to create chaos”.

And so started the Arab Spring, the first internet-driven revolution of our time. For those of us in the internet industry, revolutions are a daily occurrence. Everyone claims a revolutionary product, service or gizmo, so when we heard the term “Twitter revolution” and “information revolution”, it was met with a mixture of mirth and scepticism.

But, unlike the typical hype revolutions in the tech industry, this one was actually a revolution, with blood and teargas and police states and occupations and dead people. Sceptical or not, there was a direct link between the internet and what was playing out in real life on the streets of Tripoli and Cairo. When Bouazizi set fire to himself, he ignited an inferno fuelled by Facebook, Twitter and YouTube.

The French, Chinese and Russians certainly did not rely on Twitter for their revolutions. Yet how would an incident like Tiananmen Square affect China and the world today if it was being videoed and tweeted live by all those involved? Could apartheid have survived if South Africa watched the Soweto uprising and its brutal suppression through the eyes of the victims as it was happening?

The answer might lie in the London riots in August, after the police shot and killed 29-year-old Mark Duggan. The “R.I.P Mark Duggan” Facebook page posted this message as the riots began:

“We presume the Nazi filth likes to shoot and beat up black men. Well, not anymore, this Facebook page must send a message to the filth that we will not accept this kind of insults at the British black community. It is us, the people, who must rise as one. Whatever beef we have, let it drop and let us unite. Please send your prayers to Mark’s family.”

The Blackberry instant messenger network was the tool used to organise the protests. “Everyone in edmonton enfield woodgreen everywhere in north link up at enfield town station 4 o clock sharp!!!! Start leaving ur yards n linking up with you niggas. Guck da feds, bring your ballys and your bags trollys, cars vans, hammers the lot!! Keep sending this around to bare man, make sure no snitch boys get dis!!! What ever ends your from put your ballys on link up and cause havic, just rob everything. Police can’t stop it. Dead the fires though!! Rebroadcast!!!!!”

Suddenly the oppressed, marginalised and voiceless have a voice and an ability to connect to like-minded people in a way that makes distance irrelevant. The internet, for all its sins, is able to mobilise huge numbers of people simultaneously with a common goal, a rough organisation and an almost unstoppable communications infrastructure.

Ironically, during the Egyptian revolution, the Egyptian government did manage to shut down the country’s internet. This was such an affront to the youth, most of whom consider access to the internet as a basic human right, that observers reported an increase in the number of youths on the street following the shutdown. News still got out — Google and Twitter set up phone numbers in Egypt that protesters could phone to dictate their tweets.

The internet changes everything it touches. Unlike so many other technologies, it really does deserve the term “revolutionary”. Now it is touching government, freedom, people. We are changing. It is revolutionary.