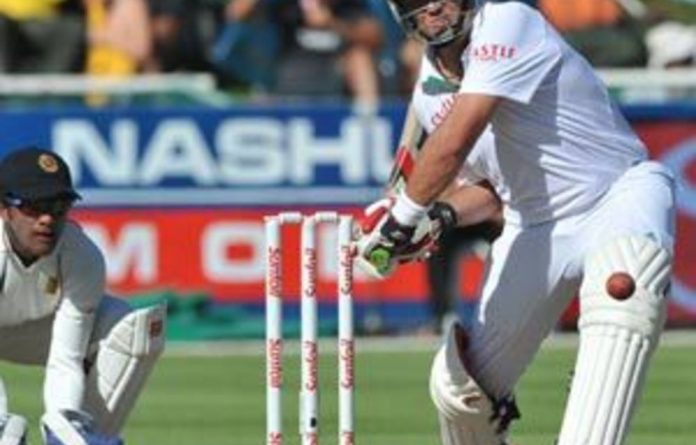 After making a “pair” in Durban, Jacques Kallis celebrated his 150th Test by scoring an unbeaten 159 in the third and final Test against Sri Lanka at Newlands on Tuesday.

At stumps, South Africa was 347 for three with AB de Villiers not out on 45.

It was Kallis’s 41st Test hundred but his first against Sri Lanka. He has now scored a century against all other nine Test playing nations.

He is the 12th batsman and the second South African to achieve this feat after Proteas’ coach Gary Kirsten.

Entertaining close to 15 000 spectators, Kallis also surpassed 2 000 Test runs at Newlands and was only the third cricketer to do so at one ground.

He trails Mahela Jayawardene who scored 2 697 at the Sinhalese Sports Club in Colombo and is ahead of Graham Gooch who accumulated 2 015 runs at Lords.

Celebrating his return to Test cricket, at the expense of Ashwell Prince, Alviro Petersen scored his second Test century off 165 balls, which included 12 fours and a six.

He was dismissed after tea on 109, playing a lazy drive to a full-length delivery from Chanaka Welegedara, which went to Sri Lankan captain Tillakaratne Dilshan at short extra-cover. Dilshan had to dive forward and take it with both hands.

The pair had come together when South Africa were in the precarious position of 25 for two and combined to set a new third-wicket partnership record for South Africa against Sri Lanka.

Together they added 205 runs, beating the previous record of 140 set by Herschelle Gibbs and Kallis in 2004.

Earlier, Dilshan won the toss and mysteriously opted to field first but, with the sun out at Newlands, it was a perfect pitch for batting.

Dhammika Prasad, coming into the side to replace the injured to Dilhara Fernando, removed both Graeme Smith (16) and Hashim Amla (16).

Smith chopped on to Prasad’s first delivery of the day and Amla was trapped lbw.

Kallis was lucky to survive several short balls early in his innings before he and Petersen tore into the Sri Lankan attack. — Sapa