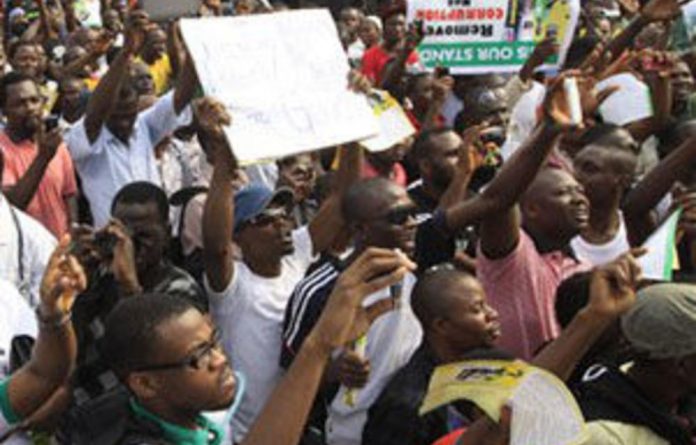 The strike’s power became clear as the sun rose on Monday in Nigeria’s commercial capital of Lagos, where typically clogged roads stood mostly empty as trade unions set up informal roadblocks. Local gang members attacked cars of those still driving in spite of the strike.

More than a thousand protesters gathered at a public park ahead of planned mass demonstration, waving placards bearing an effigy of President Goodluck Jonathan with devil horns and fanged teeth and showing him pumping fuel at a petrol station.

Petrol prices have risen from $1.70 per gallon (45 US cents per litre) to at least $3.50 per gallon (94 US cents per litre) since a government fuel subsidy ended on January 1 at the orders of Jonathan’s administration. That spurred a spike in prices for food and transportation across a nation of more than 160-million people, most of whom live on less than $2 a day.

While lawmakers on Sunday rebuked the president’s decision, the unions said they would continue their strike.

Bola Adejobi (53) said he’s protesting against more than just fuel costs. For him and many others in Africa’s most populous country, the strike represents anger that much of the nation remains without electricity and clean drinking water after more than 50 years of oil production.

‘Occupy Nigeria’
Two major unions have said they will carry out the indefinite strike despite a restraining court order. A similar situation occurred in 2003, when strikers over eight days attacked shops that remained open, took over air traffic control towers and caused a drop in oil production in a country vital to US energy supplies.

Organisers have called for peaceful protests, but gang members already began stoning vehicles and harassing motorists in Lagos. Some riot police stood on hand at the demonstration site on Monday. They quickly became outnumbered by protesters.

The strikes comes as activists have begun a loose-knit group of protests called Occupy Nigeria, inspired by those near Wall Street in New York. Their anger extends to the government’s weak response to ongoing violence in Nigeria by a radical Muslim sect that, according to an Associated Press count, killed at least 510 people last year.

Famous Nigerian authors, including Chinua Achebe and Chimamanda Adichie, issued a statement on Monday saying they supported the strike and warned that if left unattended the violence by the extremist group could sweep the country.

“The country’s leadership should not view the incessant attacks as mere temporary misfortune with which the citizenry must learn to live; they are precursors to events that could destabilise the entire country,” their statement read.

The government has so fair failed to calm public anger over the spiralling fuel costs. The government has promised that the $8-billion in estimated savings a year from the end of the fuel subsidies would go toward badly needed road and public projects.

One protester in Lagos held his protest sign upside down.

“Our life is already turned upside down,” he told a reporter. “It is not how it’s supposed to be.” — Sapa-AP