No ANC Youth League meeting request for Mbeki yet 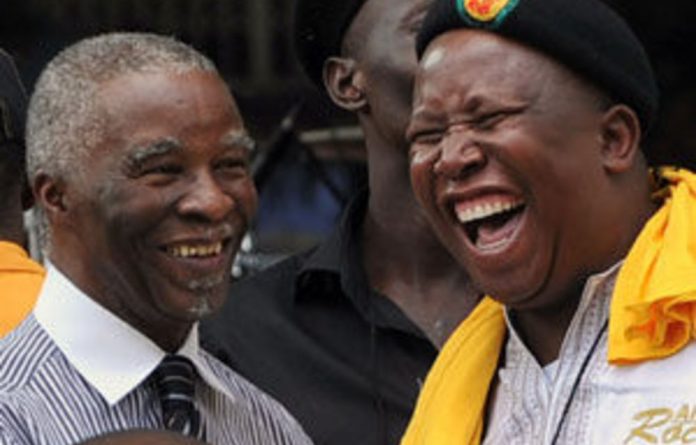 Former president Thabo Mbeki’s office had by Wednesday not received a request from the ANC Youth League for a meeting with him, his spokesperson Mukoni Ratshitanga said.

Embattled league president Julius Malema said during an interview on SAfm on Tuesday that the organisation would ask for a meeting with Mbeki to convince him to become more visible and vocal on South Africa’s economy and politics.

This was not the first time Malema had praised Mbeki, an about-turn following his criticism of him in 2008 when he called for Mbeki to be replaced by President Jacob Zuma.

In June last year Malema also proclaimed that Mbeki was one of the best cadres the ANC had produced.

But after then Pietermaritzburg High Court Judge Chris Nicholson ruled in September 2008 that Mbeki had interfered in the affairs of the National Prosecuting Authority (NPA), resulting in the prosecution of Zuma, Malema called for his removal and labelled him “a dictator” and a “dead snake”.

“We don’t want this man, he has become a dictator,” Malema said.

“Once you manipulate the Constitution for your own personal use, you become a dictator.”

‘Recalled’
Malema had also said the league intended to press for disciplinary charges against Mbeki in the ANC, and to have his party membership suspended.

Mbeki was later “recalled” by the ruling party before Nicholson’s ruling was unanimously overturned in 2009 by the Supreme Court of Appeal.

But Malema said then that the decision to appeal Nicholson’s judgment was further proof of political meddling. He claimed it came after a meeting between the NPA and Mbeki.

Ratshitanga was quoted by Times Live on Tuesday as saying Mbeki would have no objection to a meeting with the league.

“The former president has indicated that he is willing to meet any South African provided that he has time. The request will be considered like other requests,” he said.

‘The shower man’
Asked about Malema’s change of tune on Mbeki, political analyst Aubrey Matshiqi of the Helen Suzman Foundation said there were two possibilities.

“One could be that it is a genuine change of heart by Malema on Mbeki. Alternatively Mbeki could be just a tool in a political battle to highlight what is perceived as the poor leadership of Jacob Zuma,” he said.

Malema was recently heard signing songs calling Zuma “the shower man”. This was a reference to Zuma telling the South Gauteng High Court in 2006, during his rape trial, that he took a shower to avoid contracting HIV after having had unprotected sex with an HIV-positive woman.

He was acquitted of the rape charge. — Sapa