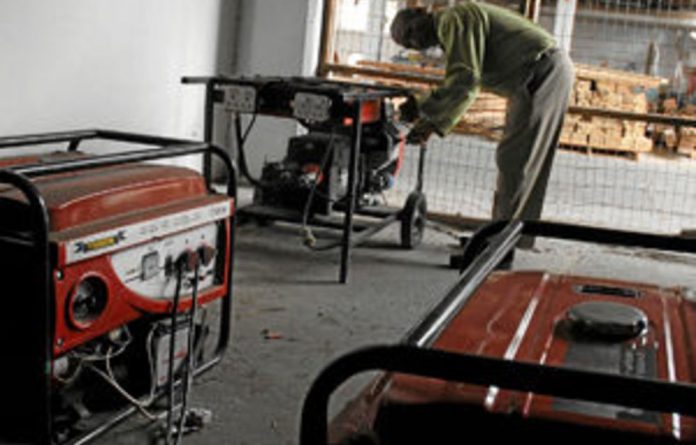 South Africa’s electricity exports are under the spotlight, as the threat of load shedding hit home this week when power utility Eskom warned that the national grid was under strain.

Last year, Eskom sold more than 13 000 gigawatt hours (GWh) to South Africa’s neighbours, to the value of R4.1-billion, or 6% of all electricity sold, according to its most recent annual report.

David Ross, the Democratic Alliance’s spokesperson on energy, said that, although Eskom should not halt exports to South Africa’s neighbours as this was part of “normal trade relationships”, it should put South Africa’s needs first.

Eskom forecast early last year that South Africa would experience a power gap of 9 000GWh, or roughly 1 000 megawatts (MW) of installed capacity, during 2012.

“Everything that can be done must be done to prevent South Africa from experiencing load shedding,” Ross said. But Eskom stressed that it also relied heavily on power imported from South Africa’s neighbours, receiving about 1 500MW from Mozambique, according to spokesperson Hilary Joffe.

The annual report showed that the bulk of exported power, 8 523GWh, went to Mozambique through transmission company Motraco, which was created to take power to BHP Billiton’s Mozal aluminium smelter. Eskom and the power utilities of Swaziland and Mozambique jointly own Motraco.

But Eskom imported power from places such as Cahora Bassa in Mozambique, along with small volumes from Lesotho and Zambia. Imports were 10 190GWh during 2010/2011, leaving the county exporting about 3 000GWh more than it takes in.

Energy Minister Dipuo Peters would not reveal the cost of the power to our neighbours in her reply to questions from the DA in Parliament. “The prices to these utilities are individually negotiated using standard megaflex tariffs as a basis with an appropriate premium,” she said in her reply. “The end-user customer prices vary from standard tariffs to renegotiated rates.”

The prices could not be revealed as “this was commercially sensitive information for Eskom’s customers”, she said.

Power exports and imports
Eskom told the Mail & Guardian that both the export and import of power to our neighbours was subject to contractual arrangements.

Apart from Mozambique, the power sold to neighbouring countries was generally sold at a premium in comparison with South African tariff structures for similar customers, according to Eskom.

Ross estimated that the country’s reserve margin, the difference between capacity and demand, was at best 8.6%. With roughly 13%, or 5 330MW, of capacity out owing to maintenance, it could bring the reserve margin to perilously low levels, he said.

But Joffe denied this and said Eskom had an ample reserve margin of 16%. Eskom was working to prevent load shedding, she said.

The utility has increased the use of its costly diesel-fuelled peaking power plants to address the added strain. It has also been making active use of the interruptability clauses in supply contracts with large users such aluminium smelters, allowing it to cut supply to the smelters within set limits. The company has been working closely with its largest 130 customers, which have made voluntary commitments to saving electricity.

Eskom last year signed up additional supply from municipal producers, such as the Kelvin power station, and from independent co-generators, including Sasol and Sappi. Eskom was looking to receive additional power from these sources, said Joffe.

It also runs a demand market participation programme, in which large customers reduce their load on the system either voluntarily or for compensation.

Nevertheless, the country is preparing for the possibility of the lights going out. Cities such as Cape Town have already published their load shedding schedule for residents should it become a reality.

But the current situation was far better than the dire days of 2008, according to Joffe, particularly as coal supplies were at 42-day stock levels and additional capacity had been added to the grid.

Eskom was still behind the introduction of a mandatory power conservation programme that would oblige large users to commit to set savings, she said.