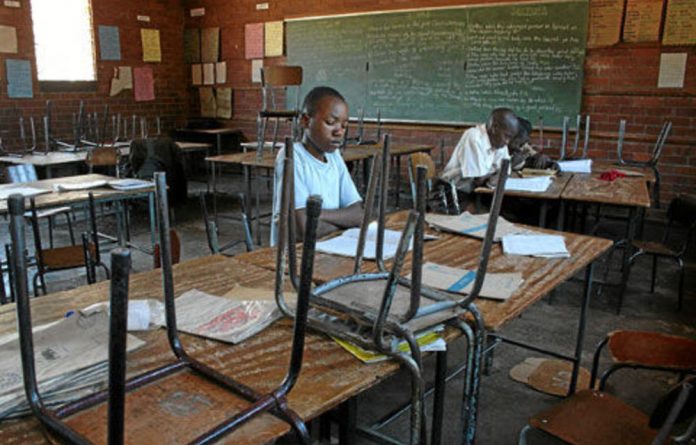 It is common knowledge that the Zimbabwean schooling system is starved of funds, was the victim of national economic meltdown in the 2000s, has lost thousands of teachers overseas, pays those who remain less than R1 500 per month and spends per learner a fraction of the norm in South Africa. But in the Southern and Eastern Africa Consortium for Monitoring Educational Quality’s 2007 report Zimbabwe’s grade sixes scored higher than South Africa’s in both maths and literacy: 507.7 in literacy and 519.8 in maths, against 494.9 and 494.8, respectively.

These are significant differences and the reasons for the discrepancies in performance between the two systems have become a matter of public debate in the past few weeks. There has been some talk about the two systems being so different that comparison is problematic. It is true that all systems are unique, but the use of international student achievement comparability surveys assumes that education systems can be compared.

In fact, the two systems are not so different. Both were affected by conflict and both used race as the filter for access to quality education under settler regimes. If anything, access by black students to schooling in South Africa before 1994 was ­considerably higher than in Zimbabwe before independence. Given the historical and educational similarities, ­comparison is legitimate and should be instructive.

After independence in Zimbabwe, Dzingai Mutumbuka, minister of education during the 1980s, left the schooling system that Zanu-PF inherited largely intact and focused on expanding access by building a large number of new schools, providing textbooks, recruiting more ­teachers — including committed expatriates — and, overall, treating teachers with respect as an important element of the revolution taking place in Zimbabwe.

From strength to strength
The result was an education system that went from strength to strength. The first major shake-up in the curriculum came only in the late 1980s. Until that point there had been ­syllabus-based changes that had reinforced and built on teachers’ knowledge and experience. For example, ZimSci was introduced as a new science syllabus with considerable teacher support.

In South Africa the multiple curriculum and policy changes started soon after 1994 and were regarded by many teachers as undermining their knowledge and experience. At the same time many experienced teachers were encouraged to take voluntary severance packages. These factors combined to destabilise the system. Whereas Zimbabwe expanded its teaching force and built new colleges of education, South Africa reduced its cadre of teachers and closed all the teachers’ colleges, moving the training of teachers to resistant universities.

The international literature accepts that these education systems were coming out of conflicts that would leave both systems traumatised. The stabilisation, reinforcement and then building of the Zimbabwean system led to success. The impact of the war of independence on the schools faded fast and Zimbabwe soon had one of the highest access as well as literacy and numeracy rates in Africa. This approach created the strength on which later reforms were built.

In South Africa the constant changes after 1994 destabilised the system and the education outcomes, although often improving somewhat year on year, have left South African students trailing in international comparability studies, even though the schooling system absorbs huge amounts of money. This approach has not dealt with the trauma in the system following apartheid; instead it has compounded the hurt.

This, though, is not the whole story. South Africa could learn from two other features of the Zimbabwean education system: the centralised management of schools and the model of teacher training. The ­centralised approach means that resources, even though minute in comparison to those available in South Africa, are targeted at where they are most needed, as are teachers. Zimbabwe has a truly national system of education. It means that the unions cannot gain the hold they have obtained in South Africa, and instructions and ­information can flow more quickly and easily in both directions because they do not get stuck or filtered at provincial level. The Zimbabwean system is ­reactive and responsive and it enforces teacher accountability through school inspection.

Teacher training
Perhaps, though, the most ­telling difference between the two systems is in the training of teachers. Zimbabwe has a system of teachers’ colleges, both technical and academic. They are mostly run by the government, which oversees and controls the employment and performance of all staff.

The Zimbabwean teacher-training model is particularly interesting. As a result of the “Zintec” experiment in the 1980s, which was designed to fill the gap in primary-school teacher supply after independence through a form of teacher apprenticeship, teacher-training colleges adopted a “two year in, two year out” model in the late 1980s. The student teacher’s first year was spent in college and focused on core subject knowledge and pedagogy, with considerable use of role-playing.
Year two was spent in school with a partial workload. Year three was spent back in college to focus on extending subject and teaching knowledge, while also dealing with problems identified in year two during teaching practice. Year four was spent in school with a near-normal teacher workload and some supervision. In recent years this model has been modified, but a ­considerable part of the teaching course (more than 50% for trainee primary teachers) is still spent under supervision in school.

This model has a number of advantages over the South African university-based system. Student ­teachers get to practise their future craft in a real school and they add to the school’s staff and are thus welcomed. Because they stay for an extended period, they can be built into the school’s time-table. The model also allows the
ministry to cover staffing gaps in rural schools by deploying both student and newly qualified teachers there.

We could also talk about the way education is positioned in the national psyche and how communities engage with their local schools, but hopefully the point has been made: South Africa could benefit from a better ­understanding of the Zimbabwean education system — one that would throw useful light on ways of improving our struggling system.

Dr Martin Prew is director of the Centre for Education Policy ­Development. He worked for the Zimbabwean ministry of education from 1982 to 1992 and for South Africa’s education department between 2002 and 2007.

Africa fails to understand the lessons

Schooling gets an F but still passes

Whose head should roll?

Time for a debate