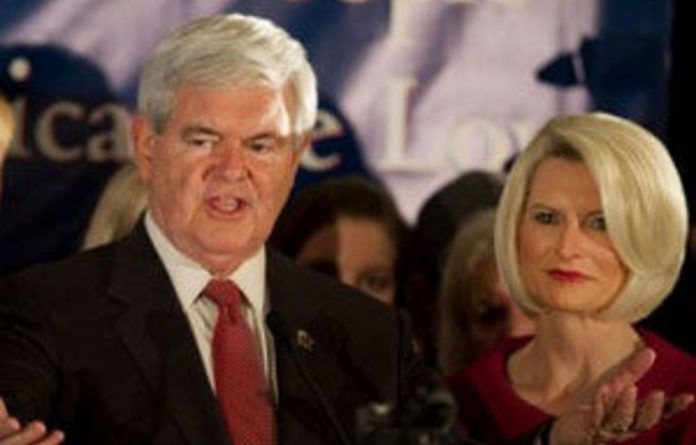 Republican presidential candidates on Sunday geared up for a long, gruelling and expensive battle for the party nomination after Newt Gingrich’s sensational victory in the South Carolina primary threw the race wide open.

As the candidates headed to Florida for the next contest on January 31, Gingrich’s team sent out an email to grassroots supporters calling for donations to counter rival Mitt Romney’s massive spending power and deliver a “knock-out punch”.

Strapped for cash, Gingrich made a “money bomb” appeal to grassroots supporters to contribute funds over the internet in the next 48 hours.

His campaign team, in spite of talk of a “knock-out” in Florida, are anticipating what they describe as a war of attrition that will go on for months. The final contest is not until Utah on June 26.

The South Carolina victory, which saw Gingrich take 40.4% of the vote against Romney’s 27.8%, shook Romney’s status as favourite to win the Republican nomination to take on Barack Obama for the White House in November. Romney has a lead of 24% over Gingrich in the latest poll in Florida but, such is the volatility of the race, which could easily evaporate.

Gingrich secured another triumph on Sunday when Romney bowed to pressure to release details of his tax returns, one of the big issues of the South Carolina campaign.

Out of touch
Romney, whose personal wealth is estimated at over $200-million, had repeatedly resisted attempts to release them. His team fear the details will be used against him by his opponents who will portray him as extremely rich and out of touch with the average American.

But in an interview with Fox News, Romney acknowledged that it had been a strategic blunder to let the issue drag on. “I think we made a mistake holding off as long as we did,” he said. “It was a distraction. I want to get back to the real issues.” He is to publish his tax returns for 2010 and 2011 online on Tuesday . In a preview, he said that, as a Mormon, he gives 10% of his earnings annually to charity.

If Romney had won South Carolina, he would have effectively sealed the nomination. Instead, he is going to have to fight hard to stop a surging Gingrich. “In my experience, a lot of people face setbacks and you come back from them,” Romney said.

His supporters were less sanguine, expressing deep disappointment, especially over the extent of Gingrich’s win. Scott Barker, a Romney voter who turned up to the candidate’s election night party in Columbia expecting to celebrate a victory, said: “I’m a little disappointed. It’s really a shock to me that Newt Gingrich did so well. I really thought that Romney would squeak it out,” he said.

Romney has already spent $7-million in advertising and organisation in Florida and will spend heavily in the remaining days. Gingrich and the two others left in the race, Rick Santorum and Ron Paul, have spent virtually nothing in the state.

To win the nomination, a candidate needs 1 114 delegates of the 2 226 who will attend the party convention in Tampa, Florida, in August. After three contests — Iowa, New Hampshire and South Carolina — Gingrich has 23, Romney 19, Santorum 13 and Paul three.

The Democrats, watching from the side-lines, welcome the prospect of a long and damaging Republican campaign. Obama, in a test run for his own campaign, is to put forward a range of proposals in his State of the Union address on Tuesday for economic recovery to help the working class rather than just the wealthy few, as he claims the Republicans do. He will follow this up with trips round the country, mainly to swing states.

Strong performances
South Carolina saw a high turnout of about 600 000 on a day of heavy rain and a tornado warning. According to exit polls, two-thirds of voters cited Gingrich’s two strong performances in televised debates in the state last week as an important reason for their support.

The four candidates hold another debate in Tampa, Florida, on Monday and again in Jacksonville, Florida, on Thursday and Gingrich is hoping that the exposure will help offset Romney’s expected ad blitz.

Romney had toyed with the idea of not participating in the Florida debates, a dangerous ploy that would have opened him up to charges of running scared. But he has confirmed that he will take part in both.

One of the reasons for Gingrich’s popularity is a belief among the party grassroots that he would see off Obama in the three presidential debates in the autumn. These same Republicans have little confidence that Romney, a relatively charisma-free candidate, would do as well.

Gingrich, in his money-bomb appeal, played this up. “If you want to watch us run circles around Barack Obama in the debates with bold conservative ideas, then please make a donation today.”

Santorum, who won Iowa, came a disappointing third in South Carolina, on 17% but said he will fight on in Florida and beyond. He has almost no cash and, unlike Gingrich, has little reason to expect any to flow in for the Florida fight. It would suit Gingrich if Santorum was to drop out, allowing the conservative right to coalesce round Gingrich rather than splitting the vote.

Gingrich is helped by the decision of Texas Congressman Paul not to campaign aggressively in Florida. Paul estimates it would cost him $9-million to campaign in Florida and said after the South Carolina vote that the money would be better spent in other state scheduled to vote in February.

Mitt and Newt: where they stand
Abortion
Gingrich supports federal ban or constitutional amendment banning abortion.
Romney says the issue should be left to individual states.

Economy
Gingrich says he would balance the budget within five years with deep spending cuts.
Romney says he would cut corporate tax rates and focus on job growth.

Healthcare
Gingrich would starve Obama’s healthcare law of cash so it cannot be implemented.
Romney would issue an order giving back authority for healthcare to states.

Gay rights
Gingrich against gay marriage, but says same-sex couples should have legal protections.
Romney opposes letting gay people marry, serve in the military or any government recognition of their relationships.

Poverty
Gingrich proposes that children should be put to work to learn the work ethic.
Romney says cash hand outs to the poor trap them in poverty. —