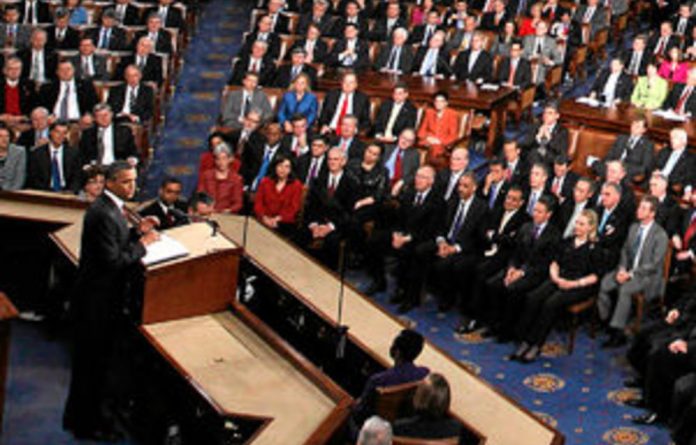 Barack Obama used his state of the union address this week to launch his 2012 re-election campaign with a populist speech that portrayed him as the champion of working-class Americans fighting against the small, wealthy elite he claimed was protected by the Republican Party.

As the Republicans tore strips off one another over tax and wealth in the Florida primary to choose the party’s nominee to face Obama, the president set out a strongly populist agenda that promised to tackle the inequality gap. Obama touched on issue after issue raised by voters, from the power of Wall Street to the pervasive influence of money in politics, and offered proposals for dealing with them.

In one striking passage, delivered in a joint sitting of the Senate and the House, Obama said the defining issue of the present time was how to keep alive the promise of the United States as a land of opportunity.

“No challenge is more urgent. No debate is more important. We can either settle for a country where a shrinking number of people do really well while a growing number of Americans barely get by, or we can restore an economy where everyone gets a fair shot, everyone does their fair share and everyone plays by the same set of rules,” he said. “What’s at stake are not Democratic values or Republican values, but American values. We have to reclaim them.”

Obama said that, in the months left before the election, he was prepared to work with both sides to get proposals implemented. But he warned that if Republicans engaged in “obstructionism”, as the White House claims they did throughout last year, he would confront them and, if necessary, bypass them.

The speech dealt mainly with the economy and job creation and included only a little on foreign policy, given it is an election year.

But Obama milked one foreign policy success: the killing of Osama bin Laden last year. He shamelessly tied himself to the Seal team responsible, saying one of his most treasured possessions is the flag the Seals carried that day, signed by each of them.

In what was his last state of the union address before facing voters, he offered policy proposals that included comprehensive immigration reform designed to win over crucial Latino voters, support for clean energy, cutting red tape on construction jobs, the farming industry and elsewhere, help for college students and mortgage cuts for homeowners.

Meanwhile, the Republican presidential candidates were gearing up for a gruelling and expensive battle for the party nomination, after Newt Gingrich’s sensational victory in the South Carolina primary threw the race wide open. As the candidates headed to Florida for the next contest on January 31, Gingrich’s team sent out an email to grassroots supporters calling for donations to counter the massive spending power of his rival, Mitt Romney. Strapped for cash, Gingrich made an appeal to supporters to contribute funds through the internet.

His campaign team, in spite of talk of a “knock-out” in Florida, is anticipating what they describe as a war of attrition that will go on for months. The final contest is not until the Utah primary on June 26.

The South Carolina victory, in which Gingrich took 40.4% of the vote against Romney’s 27.8%, shook the latter’s status as the favourite to win the Republican nomination to take on Obama for the White House in November. Romney has a lead of 24% over Gingrich in the latest poll in Florida, but the volatility of the race is such that it could easily evaporate.

Gingrich secured another triumph when Romney bowed to pressure to release details of his tax returns, one of the big issues of the South Carolina campaign. Romney, whose personal wealth is estimated to be more $200-million, had repeatedly resisted attempts to release them. His team fears the details will be used against him by his opponents, who will portray him as extremely rich and out of touch with the average American.

But in an interview with Fox News Romney acknowledged that it had been a strategic blunder to let the issue drag on. “I think we made a mistake holding off as long as we did,” he said. “It was a distraction. I want to get back to the real issues.” As a Mormon, Romney gives 10% of his earnings annually to charity.

The New York Times reported this week that the returns would show that Romney expected to pay $6.2-million in taxes on $45-million in income for 2010 and 2011 — a rate just less than 14% and well below what most middle-class families pay. Should Republican opponents not make much of it, the Obama campaign is likely to if Romney is his party’s candidate.

If Romney had won South Carolina, he would effectively have sealed the nomination. Instead he is going to have to fight hard to stop a surging Gingrich. “In my experience a lot of people face setbacks and you come back from them,” Romney said.

Romney has already spent $7-million on advertising and organisation in Florida and will spend heavily in the remaining days. Gingrich and the two others left in the race, Rick Santorum and Ron Paul, have spent virtually nothing in the state.

To win the nomination a candidate needs the vote of 1 114 delegates of the 2 226 who will attend the party convention in Tampa, Florida, in August. After three contests — Iowa, New Hampshire and South Carolina — Gingrich has 23, Romney 19, Santorum 13 and Paul three. —