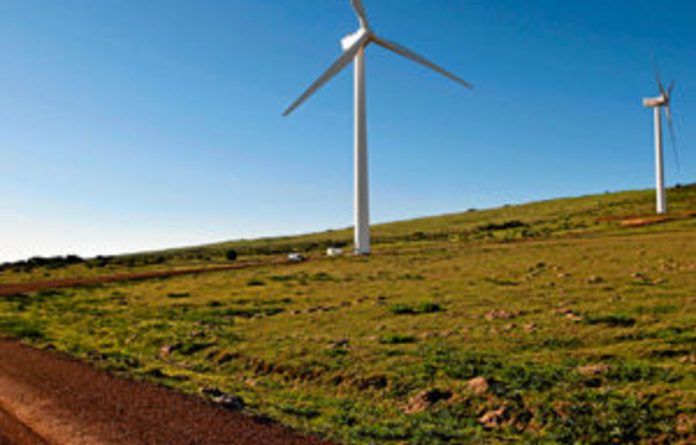 Will renewable energy be the growth catalyst this decade that the World Cup was in the last?

On March 5 bids will be called for the second round of renewable energy projects, in which an estimated R60-billion of projects will be approved. In conjunction with the bids approved in November 2011, this will bring 3 750 megawatts (MW) of alternative energy on to the grid within the next three years at a total cost of R120-billion.

The World Cup spend pales in comparison with the renewable energy drive and this is only the start of an 18-year project to ensure that 17 000MW of South Africa’s power will be generated from renewable energy.

Nedbank chief economist Dennis Dykes said that, in spite of the figures involved, the immediate economic impact might not match that of the World Cup as much of the technology has to be imported. However, it was the multiplier effect of bringing new, clean energy to South Africa that would pay dividends.

The country desperately needs more power
Eskom is currently experiencing base-load problems and has asked companies to cut back on their power usage. Moreover, contrary to initial reports, renewable energy is likely to be more cost-efficient than coal.

Dykes said that when the average cost of coal energy was calculated, it did not take into consideration the marginal cost of obtaining additional megawatts from coal. The cost of building massive power stations, which some estimated was running at three times the original costing, completely changed the relative price of coal versus green energy.

“Renewable energy could be cheaper and it could also come online far quicker,” said Dykes, who added that it was not inconceivable that, within 10 years, we could be charged a carbon-emission tax on our exports, which could make coal power unaffordable and coal power plants might be forced to close.

Unlike the increasing cost of the coal power stations the cost of renewable energy was falling as technology evolved and competition was growing. Nedbank Capital has been involved in the funding of 40% of the projects, and the bank’s infrastructure, energy and telecommunications head, Mike Peo, said 28 projects were awarded in the first bidding round, out of 53 bids. “There was a massive interest as it has been well supported by the energy department. All the projects are banked and have funders.” As a result, the industry was expecting stiff competition in the second round, which would benefit pricing.

Pieter Veldtman, the director of corporate finance firm Bridge Capital, said that, apart from bids from unsuccessful candidates in the first round, there was a wave of followers who had waited to see how the government managed the first round. “Our clients are encouraged, after two years of delay, at how well the process has been run and the determination of the department to stick to the programme.

“Last week, we were introduced to three more renewable energy producers who will be bidding. This will make it more competitive.”

Successful bidders in the first round have to be ready for construction by June 30 this year, which means that, all going well, the first energy will come online in 2013. Phase two will be awarded in May, with construction to start in November.

Job creation
But will it create jobs? Peo said the bid process carried significant local input, job creation and black economic empowerment (BEE) requirements, making up 30% of the points allocated to the project.

Job sustainability was also critical to each project. Peo cited the cleaning of the solar voltaic panels as an example of job creation in poor, underskilled regions such as Upington, where it was probable that a solar park would be developed.

He said that although South African companies were not yet in a position to develop large-scale technologies such as building wind turbines, they could use local steel production and highly experienced construction firms to put in the auxiliary infrastructure, such as the bases to house the wind turbines, the roads to the sites, connections to the grid and locally made switches.

“Given the size of our programme, we could become a base for the development of the technologies over the next five to 10 years. There is no question that we could be a hub for development of renewable energy in places like Namibia and Botswana, for example,” said Peo.

Veldtman was less enthusiastic about long-term job creation. “One of our R2-billion projects will provide only 12 permanent jobs on site. The jobs that are created are low skill, such as panel washing and security guards.” Veldtman said that the jobs created by the construction industry for the building would simply sustain a struggling industry rather than create significant new jobs.

For this reason it was unlikely that the project would lead to a significant skills transfer, Veldtman also warned against the government requiring local technology content as South Africa had not proved itself in the field. “We would then be testing new technology or [setting up new] firms, which would increase the risks of the projects and therefore increase the cost of funding. The ultimate benefit for communities,” he said, “is being able to deliver better access to electricity and a less polluted environment.”

Veldtman said that the government had an opportunity to use the momentum it had created to further its renewable energy expansion. Although, after the bid in March, the government’s three-year target of 3 750MW of renewable energy would be met according to its integrated resource plan, its longer-term target of 17 000MW by 2030 still had to be achieved. Rather than putting a stop to the process now, the government should continue to roll out projects.

“We have gone through the learning curve, there is interest internationally and the process is working. Rather sustain the momentum and reach the target earlier,” said Veldtman. Given the overspending on the new power plants and Eskom’s significant price increases, grid parity pricing would be reached sooner than expected, he said.

Funding remained a constraint. By the end of the first two phases R120-billion would have been used, putting strain on traditional funders. This could be alleviated by issuing infrastructure and energy bonds for traditional fixed-income investors such as pension funds. But the Sanral toll-road debacle had negatively affected existing Sanral bondholders and might put potential investors off going into politically uncertain projects.

Both Dykes and Veldtman said the government could utilise the experience gained in other major development areas. “These projects have onerous localisation and BEE [black economic empowerment] requirements. Bidders moaned and complained, but they found ways to support localisation and stay competitive,” said Veldtman.