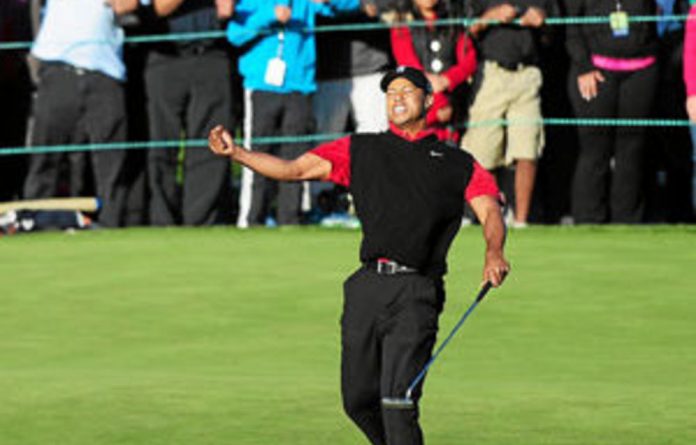 His price is down, but his hopes are up. Tiger Woods, attracted by a $1.5-million appearance fee (significantly reduced from what he demanded in his prime), will begin his 2012 season in the unfamiliar surroundings of Abu Dhabi in the unfamiliar role of underdog.

The world number 25 has eschewed the PGA Tour event in San Diego, a tournament he has won six times, to come to the Middle East, where he will face the top four players in the world, two of whom — Luke Donald and Rory McIlroy — were paired alongside him for the first two days of the Abu Dhabi Championship, which began on Thursday.

Coming off his victory at the Chevron World Challenge at the tail end of last year, his first for more than two years, Woods could not have chosen a more exacting test of his apparently restored swing. Yet he did his best to sound optimistic.

“It’s been quite a few years since I’ve been physically fit, so I’m looking forward to getting out there, playing and giving it a full season, which I haven’t done in a while,” Woods said yesterday, before playing a practice round at the Abu Dhabi club.

Who would deny a man the unblemished hope that comes with the start of any new season? But Woods will find that the world of golf this year is considerably different from the world of golf he once dominated. Off the course he still commands more attention than any other golfer, but his power is no longer unfettered. Witness the decision by his former swing coach, Hank Haney, to publish a book chronicling their six years together. Woods is furious about what he believes is a betrayal of trust.

The publication date is timed for the week before the Masters, creating maximum impact for sales and maximum distraction for the book’s subject. Asked whether he found it difficult to trust people in the light of Haney’s publication, Woods was terse to the point of rudeness: “One might say so.”

More prosaically, the former world number one finds himself on the wrong end of market forces. Before personal scandal damaged his gilded brand, he asked for and received upwards of $3-million just to turn up to play in the Middle East, most notably in neighbouring Dubai. This week he is being paid half of that. This is not exactly penury by the standards of normal people, but it is a reflection of his diminished stature, not to mention his personal circumstances in the wake of a reported divorce settlement of $100-million. It is safe to assume he is far from broke, but with a jet, a couple of yachts and a $40-million house, his weekly outgoings are, how can it be said, significant.

Woods unrepentant despite criticism
Woods’s decision to skip this week’s event at Torrey Pines, where he won the 2008 US Open, the last of his 14 major victories, has resulted in his being criticised for placing guaranteed money above an improved chance of victory on a course where he has been a proven winner.

He was unrepentant, conceding that appearance fees play a part in his scheduling. “It certainly does,” he said. “That’s one of the reasons why a lot of the guys play in Europe. They do get paid. I think the only tour that doesn’t pay is the US tour.”

The fall in Woods’s “stock price” could easily be reversed were he to start winning tournaments on a regular basis. That, however, may be easier said than done this week. After more than two years without a win, the former world champion prevailed in December’s Chevron World Challenge, where he birdied the final two holes to hold off Zach Johnson. A win is a win, as the old saying goes, but there were only 17 other players in the field, many of them exhausted at the end of a long season. Woods, on the other hand, was out injured for significant parts of the year and was fresh.

Donald, who won the money list on both sides of the Atlantic, is coming off the best year of his career, while McIlroy, Westwood and Kaymer all won big events in the closing weeks of 2011. Kaymer has won three times on this Abu Dhabi course. A victory for Woods on Sunday would represent his most significant since that US Open win three-and-a-half years ago.

As always, Woods insisted he had made the journey here – 16 hours in total from his Florida home, with a stop in London for fuel — with the intention of winning. He was more gnomic when asked to look ahead to the rest of the year.

“Who knows? Unless you have a crystal ball and you want to tell me about it, I don’t know. I’m looking forward to it, though,” he said. “Unfortunately, I had only one win last year. I would like to get more than that this year.” –