SA and the AU: It’s complicated 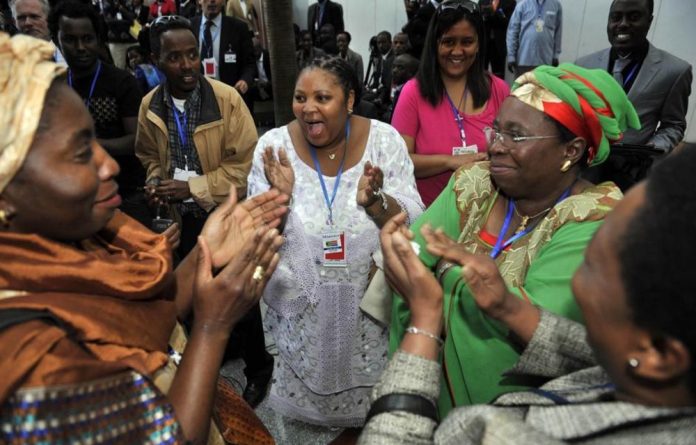 When the African Union’s (AU’s) election rules forced South Africa’s Nkosazana Dlamini-Zuma to end her bid to become chairperson of the AU in Addis Ababa this week, local media claimed it was because South Africa’s Africa policy was weak and directionless.

But South African diplomats and international relations advisers described former AU chairperson Jean Ping’s failure to get himself re-elected (Gabon’s former foreign minister stood alone in the fourth voting round but failed to secure the necessary two-thirds majority) as a triumph for South African diplomacy.

The reasons offered for this go to the heart of some of the more intractable problems South Africa has in trying to improve its clout in Africa.

According to Eddy Maloka, special adviser to the minister of international relations and cooperation, the “’24 or 25” votes Dlamini-Zuma received “came from all over, and the great unifying issue was the fact that our African institutions and their leadership must in future be both accountable for their performance and impervious to foreign interference”.

What Maloka and other departmental officials have been saying openly is that the AU, under Ping, has been dominated by the francophone countries. What they have implied is that the French have found this useful.

“One could just come out and say that this election was a proxy battle between France and South Africa,” said Francis Kornegay of the Institute for Global Dialogue.

According to a department source, the overthrowing “of an African head of state in Côte d’Ivoire by the French under the cloak of so-called UN [United Nations]” action and the “killing of [Libya’s ruler Muammar] Gaddafi by a foreign power” had amplified continental sovereignty concerns, enabling South Africa to lobby “with some success, even if it wasn’t reflected in the vote”, in West and Central Africa.

But the success of South Africa’s strategy for AU reform is hard to gauge. A department source said that “many nations were sympathetic to what we were saying about the need for an accountable and trustworthy AU, but claimed they had either already committed to Ping or that a gentlemen’s agreement existed going back to the OAU [Organisation of African Unity, which became the AU] days that obliged them to go along with regional consensus”.

Kornegay said the persistence of gentlemen’s agreements in African politics and “this notion that small states should run the African Union” was proof that Africa had never been decolonised.

“Those small states are an expression of what I would call the Africanisation of colonialism because, when the OAU was set up, the first thing the first generation of African leaders did was ratify the Berlin Conference,” he said.

France’s influence is not limited to West or Central Africa. It has been widely perceived in the steps that saw Madagascar’s former president, Marc Ravalomanana, being ousted by former DJ Andy Rajoelina, not long after he proposed introducing English as an official language.

David Zounmenou of the Institute for Security Studies said: “Pretoria supports Ravalomanana’s demand to be allowed to return to Madagascar from exile. It is in their and the Southern African Development Com­munity’s [SADC’s] interests to see him returned to power.

“However, what the Malagasy crisis reveals is that Pretoria’s support and influence within SADC is not watertight because part of the reason Ravalomanana has been kept out so long is largely due to a SADC roadmap drawn up by Mozambicans that stated that he should be kept out.”

A departmental source claimed Nigerian support for Dlamini-Zuma would have resulted in her election, but added that Nigeria had taken issue at being approached for support only after South Africa had approached the SADC countries.

“They argued that if we truly had the special relationship we claimed to have with them, we would have done that. But tell me, how could we not talk to our neighbours first?” the source asked.

South Africa fails to secure the vote of a regional heavyweight
South Africa also failed to win the vote of Ethiopia, another regional power. Late last year South Africa butted heads with Ethiopia in the UN Security Council when it came to voting on whether to impose sanctions on Eritrea. In the view of Eritrea’s UN ambassador, Araya Desta, the vote turned into a sideshow of the AU power tussle. Desta said that Ethiopia had offered to support Ping’s bid for a second term in return for Gabon’s support for sanctions against Eritrea.

According to a UN source, South Africa’s initial resistance to sanctions angered Ethiopia and was seen as “a sour grapes manoeuvre against the countries that had pledged their vote to Ping”. De Kock said the antipathy of regional power Kenya to South Africa was grounded more in economic than in political concerns.

A Kenyan diplomat said that the founding of a major brewery in Juba in South Sudan by South African Breweries “coincided with the imposition of tough customs and excise duties on imported beer, closing that market to our brewers. We know that was a direct result of the South African government speaking to the government of South Sudan.”

South Africa’s liberation credentials may have been used to good effect in South Sudan but questions have been asked about whether the government is willing to relate to North African liberation movements as it has to sub-Saharan ones. “It is a real issue,” said Said Ferjani, adviser to the Tunisian president. “I haven’t seen South Africa making much headway in North Africa.

“I know their awkward human rights position on Syria derives from problems they had with Nato’s interpretation of the UN’s Libya resolution but, when there are people being slaughtered and you prevaricate for geopolitical reasons, it is unacceptable. Both South Africa and the Arab world have yet to get the balance right,” Ferjani said.