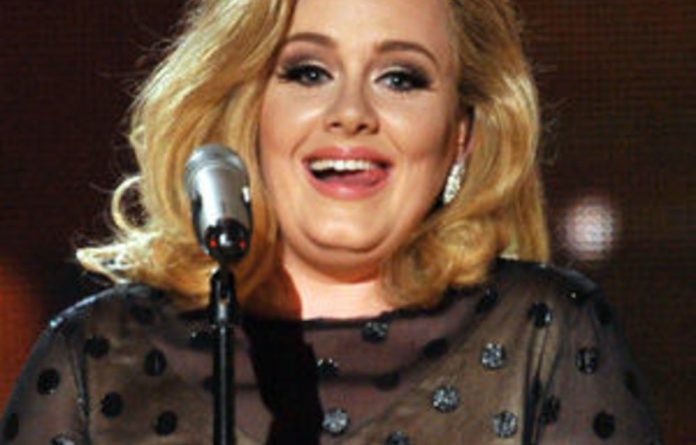 British soul diva Adele made a triumphant return to the stage at the Grammys on Sunday, winning a clean sweep of six awards and a standing ovation, in a show clouded by the death of Whitney Houston.

The 23-year-old Londoner, who has been out of action since October to undergo throat surgery, wowed a star-studded audience with a storming rendition of her worldwide hit Rolling in the Deep.

The tune won the best song Grammy, to add to Adele’s haul of awards for best record, best album for her breakthrough 21, best short video, best pop album and best pop artist — wins in all six categories in which she was nominated.

“This record is inspired by something that is really normal … just a rubbish relationship,” said Adele, adding: “It’s been the most life-changing year.”

“Oh, I got a bit of snot!” she said in her trademark cockney accent, wiping her nose and fighting back tears at the climax of the three-and-a-half hour show, which ended with a Beatles medley led by Paul McCartney.

Comebacks
The other hotly-anticipated comeback of the night was by iconic 1960s California surfer band the Beach Boys, who played together live on stage for the first time in over two decades.

A three-song tribute started with a close-harmony version of Surfer Girl by Maroon 5, and then the falsetto strains of Wouldn’t It Be Nice by Foster the People, against a backdrop of multicolour surf boards.

After a standing ovation, the Beach Boys themselves, all now in their 60s, then took to the stage to play Good Vibrations, with famously glum-looking Brian Wilson almost smiling as he hit the high notes with his old bandmates.

Another blast from the past came in the form of country legend Glen Campbell, currently on a farewell tour after being diagnosed with Alzheimer’s, who had the audience singing along with his classic Rhinestone Cowboy.

But while Adele was the big winner, the show was punctuated with tributes to Houston, the 1980s and 1990s superstar who died on Saturday at age 48 at the Beverly Hilton hotel on the eve of the US music industry’s big awards night.

‘Fallen sister’
The Grammy show began with a prayer for Houston from host LL Cool J.

“There is no way around this. We’ve had a death in our family,” he said, adding: “The only thing that feels right is to begin with a prayer for a woman who we loved, for our fallen sister.”

The audience, with stars including McCartney in the front row, then watched a clip of Houston singing one of her greatest hits, I Will Always Love You, and gave her a standing ovation.

Later in the show, singer Jennifer Hudson — who was presented with a Grammy by Houston in 2009 — gripped the audience in silence with a classy rendition of I Will Always Love You, the smash hit from Houston’s film The Bodyguard.

“Whitney, we love you,” she said as she closed the performance sung to a piano accompaniment, spotlighted in the dark in a plain black dress.

The LA County coroner’s office reiterated that there appeared to be no suspicious circumstances surrounding the death.

“At this time … there are no signs of foul play,” assistant chief coroner for Los Angeles County Ed Winter told reporters shortly before the Grammys show kicked off.

A further scare came on Sunday when Houston’s daughter Bobbi Kristina, from her stormy 15-year marriage to singer Bobby Brown, was rushed to hospital to be treated for stress. She was later released. — AFP