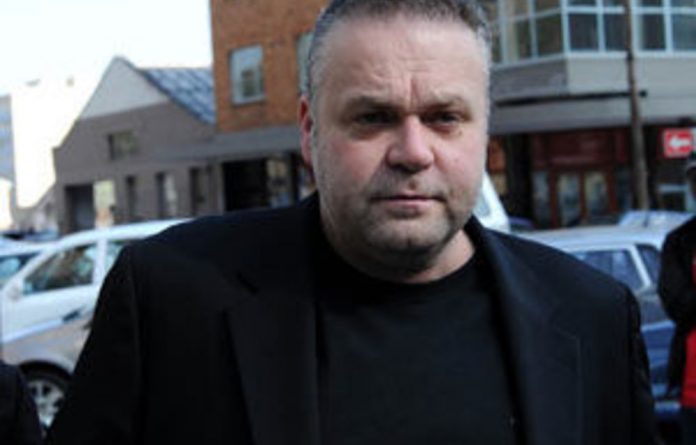 Reading from affidavits by the three accused, Hellens told the court that Krecjir was not a flight risk and that he would surrender all his travel documents to the authorities.

Krecjir is a fugitive in his native Czech Republic, where he has been charged with fraud and conspiracy to commit murder.

The South African authorities tried unsuccessfully to deport him after he arrived on a false passport from the Seychelles in 2007 and was flagged in an Interpol red notice.

Scoffing at such claims, he refers to himself as a “family man” escaping political persecution in his home country. He has applied for refugee status.

He has also been charged in South Africa with insurance fraud in connection with a R4.75-million claim on a dread disease policy based on a false medical report. That trial is due to begin in April.

He is now seen as a major force in South Africa’s underworld.

Through Hellens, Krecjir also blamed private investigator Paul O’Sullivan for the way he has been vilified in the South African media.

The bail hearing was postponed until Friday.

The three men were arrested on February 12 and appeared in court the following day on charges of armed robbery — a schedule six offence carrying a maximum 15-year jail sentence — allegedly carried out at an electronics shop in Pretoria West in October last year.

Hellens argued that the state had no case, adding that his clients had made themselves available to police investigators since October to provide information relating to the robbery.

In a gun battle that ensued Dominguez was allegedly shot in the arm. He was later traced to his house and arrested after police found his bullet-riddled Toyota Hilux in Fountains Valley.

In court on Thursday, Laganin claimed that the incident had its origins in his attempts to bring into South Africa €125 000 accruing from the sale of a house in Serbia.

However, as he had no bank account in South Africa, he had arranged to transfer the money through the Pakistanis who owned Ali’s Electronics.

As he had left the shop, he had been confronted by four Pakistani males who had robbed him R900 000 in sealed boxes.

He had asked Krejcir and two others to return to the shop in an effort to recover the money.

There, the Pakistani owner had handed over R200 000 and promised to pay the balance, confirming their suspicion that he had been involved in the original robbery.

As they left the shop, Laganin said, they had again been confronted by seven stone-throwing Pakistani males and robbed. Domingues had been shot in the arm after he had fired three warning shots and a shootout had ensued.

At the time sources claimed that Dominguez and Krejcir went to the shop to collect a debt. Three police sources linked to the investigation said that the incident flowed from a “drug deal gone wrong”.

Meanwhile, police could not confirm reports that a wanted Montenegrin drug-dealer, Darko Saric, is hiding in South Africa.

Spanish media claimed this week claimed that Saric, whose brother Dusko was indicted in 2010 for his alleged role in an international cocaine smuggling operation, is living in South Africa.

Hawks spokesperson McIntosh Polela told the M&G that police were following up the reports.